US equities closed the year with a loss, falling by 0.20% for the week. But what a year it was, up about 21% (including dividends). Equities were on a tear all year, never falling by more than 2%. The Dow is on a nine-month winning streak, the most since February of 1959 when it had advanced for 12-months in a row. And the S&P 500’s nine-month win streak matches the nine-month stretch that ended in April of 1983. The NASDAQ Composite has now increased six-years in a row, tying the 1975-1980 period as the longest run on record.

International stocks did improve by 0.60% for the week, with a 28% advance on the year. Interest rates fell so bonds were up by 0.42%.

According to the International Monetary Fund, US debt now stands at 108.1% of GDP, the fifth largest amount in percentage terms of all large countries. Meanwhile, the tax bill passed last week will add another $1 trillion dollars or so in debt over the next ten years, and deficits will also increase because of structural issues (social security/medicare). At some point, the country will need to deal with this, especially if interest rates rise. 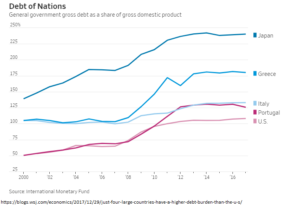 The Citigroup Economic Surprise Index closed the year at its highest level in six years reflecting the best level of constant economic growth in three years. Normally, surprises on the upside lead to revising estimates higher going forward, making it more difficult to continue to “surprise”, which then leads to disappointments if the numbers come in under the estimates. Missed estimates could impact equities to the downside. 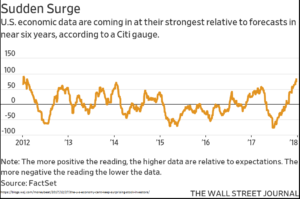 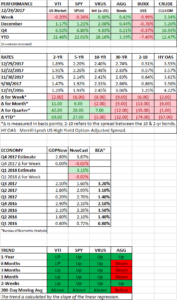 US equities hit a new high on Monday and then closed successively lower for the rest of the week, at just about the same closing price as last week. However, adjusted for dividends, prices advanced by 0.47%. International markets were up 1.64%.

The excitement was with the 10-year treasury bonds. Interest rates jumped to their highest level in nine months, closing the week at 2.48%. The rising rates had a spillover effect on rate-sensitive equities like REITs and utilities, which fell by 3.82% and 4.67%.

Even with the drop in utilities, many are still expensive on a historical basis. As an example, looking at American Electric Power (AEP), the stock is currently selling at a price to book of 2.0 compared to a median value of 1.60 since 2015, 20% lower than the current ratio. 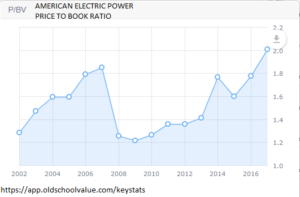 While utilities have been falling, energy has been rallying. The XLE is up 16% since hitting its low in mid-August.

Trump signed into law the new tax legislation. The bill is highlighted from an investment perspective by a more competitive tax rate for corporations and the repatriation of foreign earnings. A stopgap measure to keep the government funded through mid-January was also passed.

Cryptocurrencies collapsed. Bitcoin fell by 36.5% from its peak one week ago. 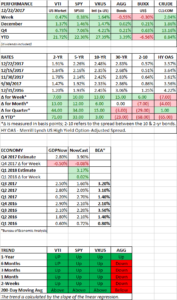 US stocks increased by 0.78% to hit another record. International equities moved ahead by 0.21% and bonds increased by 0.26%. Higher corporate profits powered by the tax bill are getting the credit for the recent stock run. Profits on the S&P 500 might improve by $10 per share due to the tax cut. On the yield front, the 2-year rate increased by 4 basis points and the 10-year fell by 3, dropping the spread to 0.51%

Lawmakers are close to passing a $1.5 trillion tax cut. The plan does not simplify the tax system. The bill is filled with staggered dates, new rates, and complicated new provisions. The pass-through legislation will lead to unintended consequences. The bill overall will add to a deficit that the US cannot afford to make any bigger.

The legislation does have needed relief for repatriation of overseas earnings (almost $3 trillion) and a lower tax rate for corporations to make the US more competitive with other countries.

In Janet Yellen’s final session as Chair, the Fed increased the federal funds rate by 1/4% to 1.25% to 1.50%. The Fed currently plans to increase rates another three times in 2018 and twice in 2019. The market is currently pricing in two rate increases, but there are some economists predicting four. In addition, the Fed has begun the process of unwinding their balance sheet.

A combination of lower tax rates and higher interest rates in the US could pose a problem to China in keeping capital at home. In response to the Fed, the Chinese central bank also increased rates, first, to slow capital flight out of China, and two, to try to tame all the leverage throughout the Chinese system. While higher interest rates might lower the appeal of taking on more debt in China, it also increases the carrying cost of current loans in the very highly leveraged Chinese system. It is a tricky balance that the Chinese central bank will have to thread.

It remains to be seen what the European Central Bank will do. But at some point, they will probably slow the pace of their bond purchases and will eventually begin to increase rates.

All the above points to a world with slightly higher interest rates and less central bank stimulus, traditionally a formula that would slow down the pace of the equity market due to a falling p/e ratio.

Disney bought most of the assets of 21st Century Fox for $66 billion (stock + debt – cash) in a monumental deal as it scales up to take on Netflix. Netflix currently trades at an enterprise value to EBITDA ratio of 47, compared to 10.5 for Disney. 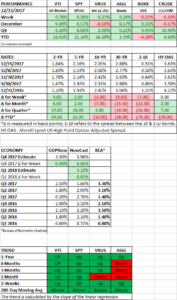 The market dipped on Monday and Tuesday but rallied just enough over the remainder of the week for US equities to hit new all-time highs. The US markets were up by 0.30%. International markets fell 0.21%. Bonds were flat and the dollar advanced by 0.92%.

Bitcoin futures trading begins today (Sunday, December 11) at the CBOE Global Markets Exchange. Later in the month, the CME Group launches its own bitcoin product. And then the NASDAQ will launch early next year. The futures are set to settle in US dollars, not bitcoin.

The talk of bitcoin is now everywhere and the consensus by the old-timers is we are watching a bubble in the making. Judging by the chart, it sure looks that way. From Monday to Thursday, the price rose by 53%, only to fall by 22% two days later. Depending on your perspective, buying bitcoin is akin to “investing” in past manias such as Dutch Tulips, or maybe like Beanie Babies (on a much grander scale). To others, bitcoin represents the future of currency and just about everything else.

Barron’s interviewed 10 investment strategists for their 2018 forecasts. None of the ten forecast a fall in prices in 2018. Tobias Levkovich from Citi Research is forecasting a flat market. He projects a 2018 price of 2675, just about 24 points from here. All of the others are more on the bullish side. At the high end is Ed Yardeni, forecasting a price of 3100. The projection calls for a 7.2% gain, fueled by higher projected earnings of about 10%. But those earnings increases are counting on a tax cut worth about $10 in earnings. Take out the tax cut and earnings would only be estimated to increase by about 3%. The strategists also forecast an increase in the 10-year treasury rate to 2.77%, up from the current 2.38%.

Fears that the strategists cited include inflation, aggressive rate increases by the Fed, regulations against social media companies, and a bitcoin crash. 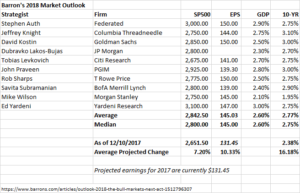 Labor markets continue to show strength. Nonfarm payrolls were up by 228,000. The average workweek increased by 0.1 hours to 34.5 hours. The unemployment rate remained steady at 4.10%. Average hourly earnings moved ahead by 0.2% and the year over year change is now at 2.5% compared to 2.3% last month.

The House and Senate both passed a bill that provides funding for the US government for another two weeks. 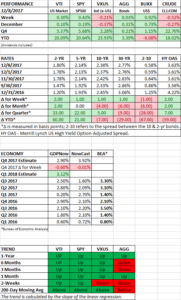 It was a bumpier ride than normal, but the market continues to travel in the same direction, up, as US equities advanced by 1.46%. North Korea even test fired a new missile that can supposedly hit anywhere in the United States, and that didn’t shake the market advance. International markets dropped by 1.04% and the bond aggregate was down slightly by 0.13%.

Markets moved higher on progress on tax legislation. On Friday, news broke that former advisor to President Trump, Michael Flynn, was going to please guilty and cooperate with the special counsel’s inquiry regarding election interference. That sent equities into a tailspin. Stocks immediately tumbled and were down 1.6% from the open by midday. But the buy the dip mentality prevailed and the market rallied to close down just 0.2% for the day.

Tax legislation now goes to a committee with the House and Senate. The resulting legislation, if passed, will impact almost every area of the US economy. The original hope was that tax legislation would simplify the tax system, encourage economic growth and be somewhat revenue neutral. Most likely, the end result coming out of committee will be a tax system that is more complicated, especially in terms of pass-through entities (leading to unintended consequences), $1 trillion-plus added to the deficit over the next 10-years and a questionable impact on future growth, at least according to the plan’s critics. Similar to Obamacare, there is a rush to pass legislation for the sake of just passing legislation, instead of crafting a well thought out bill that is better understood and debated. 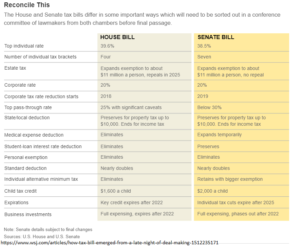 Real GDP growth for Q3 was revised higher to 3.3% from the original estimate of 3.0%.  It was the fastest growth in three years. Personal income increased by 0.4% in October. Disposable personal income rose by 0.5%, the most in eight months. Initial jobless claims came in at 238,000, a historically low number. Retail sales during the Thanksgiving holiday were good. Overall, the economy continues to look strong. Estimates of Q4 growth increased in both the Atlanta Fed’s GDPNow model and the New York Fed’s NowCast model to 3.50% and 3.93% respectively, up from 3.40% and 3.67%. 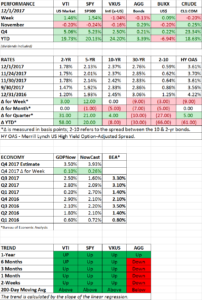