Futures are down sharply this morning and barring a big rally during the day, markets will close at the low for the month. Here is what economist Nouriel Roubini said yesterday, “The lesson is you take even a small Argentina that has a sharp currency movement at a time when the data of China are softer and there is political risk coming from Turkey, Thailand, Ukraine, and then you end up in a mini-perfect storm. Suddenly, not only emerging-market currencies or fixed-income or equities are under pressure, but then the transmission of contagion has been also to European and U.S. equities.”

I am doing some historical research and came across this quote from the Barron’s issue dated 2/16/98:

“With production flowing to countries with cheap labor and consumption moving from cheap, standardized goods to more customized products and services, problem-solvers and strategic thinkers are more valued than ever-and found more often in offices than in labs or on shop floors. Microsoft, to cite one example from the study, triumphed over Apple Computer not because of technological prowess but because of superior marketing and competitive maneuvering.”

A good example of how who is on top today may not be there tomorrow and the reverse.

The big time spill in the market least week was blamed on currency problems in Turkey and Argentina, but one has to remember such events have happened in the past. We came across this in the January 12, 1998 edition of Barron’s:

“With wave after wave of bad news blasting across the Pacific, the Dow Industrials slumped almost 100 points Thursday, then went into a 222-point power dive Friday that plunged the index to a loss of more than 4% for a trading year that began only six days earlier.”

“Driving the losses were three straight days of selloffs in Southeast Asia, led most notably by a one-day, 26% rout of the Indonesian rupiah on fears that an IMF rescue package would be torpedoed. But virtually no market and no currency was spared, with the Philippine bourse closing at its lowest point since 1993, Hong Kong’s Hang Seng index gettering hammered below 9,000 and Japan’s Nikkei unable to push through the 15,000 barrier for any extended time. Chaos was the rule: Indonesia was swept by rumors that President Suharto’s palace was ringed by army tank; Koreans sold and donated thousands of pounds of gold to the government; a distraught Thai broker jumped to his death from a high-rise in Bangkok.”

Sounds somewhat similar to today. But a week later, the market had rebounded. We will see if the same script plays out this time.

Streetwise – A Chinese manufacturing slowdown as well as lower earnings growth hit the markets. Based on 16% of the SP500 reporting, q4 growth came in at 5.4% versus a projected 9.6% from last October. Companies make look to M&A to generate growth. Low financing costs have results in both the buyer and seller sometimes rising in price (in the past only the seller would normally rise).

Super Bowl Package – The Ultimate Sportsman Package includes a Rangers hockey game on Friday, a Saturday matinee to The Book of Mormon, Saturday night floor seats to the Knicks-Heat, the Super Bowl and a Billy Joel concert on Monday. Price – $12,000.

The Talk of Davos – Different from past years, attendees were generally upbeat.

Hey, Big Spender – Many companies are buying back shares at prices that are too high as measured by comparing the current p/e ratio versus a 7-year average. Better to pay a dividend instead of buying back stock at a premium.

Urban Outfitters – Same store sales +3% for November and December but less than the 5% Wall Street projections. Company owns Urban Outfitters, Free People and Anthropologie chains. Good growth in the latter two chains offset decline in Urban Outfitters. EPS should be $1.86 this year versus $1.62. 2015 should be $2.15.

Currently trades at 17x ’15 numbers which is less than the 20x multiple it normally gets. Company has strong management, consistent sales increases, strong balance sheet and cash flow.

Price is $36.52 and Richard Jaffe of Stifel Nicolaus sees the stock rising to $48. Neely Tamminga of Piper Jaffray sees $55 within a year

Weekday Trader – Genesee & Wyoming (GWR) – small railroad with a  big future. $93 today but can get to $120 per Justin Long of Stephens, “The management team is extremely strong, with a great track record of completing deals and integrating acquisitions.” Controls 20% of US short-line market. 16x ’15 EPS and has 15-20% long term earnings growth.

Market Watch – Todd Market Forecast wrote “The Dow has been up for five years in a row. Since 1901, there have been three other times when this has happened. The 1920s, the 1940s and the late 1980s. There has been only one period when there were more than five up years in a row. That was in the 1990s, when the Dow moved up nine years consecutively. In other words, we are overextended. Based on history, we are due for a down year…”.

The Trader – 580 days since last correction.

Abby Joseph Cohen – rally is more growth oriented. If p/e remains stable GS forecast for S&P is 1900. If p/e expands to 18 then S&P could hit 2088. Mexico should benefit  from improvement in US. Ishares ETF is EWW.

PDI – fund can do well if housing market holds up. Trades at 5% discount to NAV.

Last week we penned the same question and answered “student loans”. Today we look at the threat from China, specifically the Chinese shadow banking system. Fear that the system is about to implode led to worldwide drops in the markets over the last couple of days including a 300-point drop in the Dow yesterday.

China has built up this huge property and infrastructure system that was driven by easy credit that often ignored if the project made economic sense. As an example, there are stories of new airports that get maybe one or two flights a day. Excess like that cannot last.

The shadow system is composed of loans that were packaged together and sold to investors. Sound familiar? Maybe it brings back memories of subprime deals in the US. In a CNBC interview from Davos, the Chairman of a the Industrial and Commercial Bank of China said that the bank wouldn’t bail out investors in the event of a default.

China depends on cheap credit. A default in the system might have a Lehman like effect in China. The Chinese government may or may not bail out the investors and the collapse of the shadow economy may or may not happen. But in the last couple of days the markets didn’t want to wait to find out.

Another potential crisis to watch.

Analyst recommendations have greater influence when market conditions are negative. Click for more.

Bloomberg Businessweek highlights the danger student loans might pose the economy. Similar to housing, you have a huge market that is growing, with no credit standards being imposed and government guarantees.

Forbes article on how to effectively turn an HSA into an IRA.

We have updated our annual SPY charts and added a 25-year monthly chart of the SPY. The annual charts date back to 1994. See the all the links on the right side of this page, further down, titled “SPY Annual”.

Here is how the Harvard Endowment has evolved in recent years: 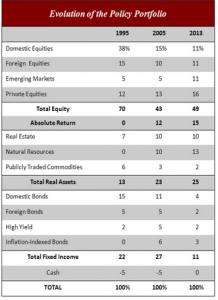