It was another winning week on Wall Street, as US equities rose by about 0.60%. The Dow is now on an 11-session winning streak, that is the longest stretch since January of 1987 when the index put together 12 wins in a row.

The market has had the wind to its back, and either this big run will turn out to have correctly anticipated an improved economy and higher profits in the near future, or, we will continue with more of the same slow to moderate growth path. If the ladder scenario turns out to be correct, then the market has gotten ahead of itself and it will have to likely correct through either time (via a somewhat flat performance) or by price (as in a correction of some type).

There are some positive signs that the economy is accelerating. And if we get positive corporate tax reform, roll back on regulations that do not meet cost/benefit tests, and repatriation, then maybe this run up is justified. However, all of that happening is a big “if”. We will learn more when Trump rolls out his plans and what the response in Congress is. Treasury Secretary Steve Mnuchin is aiming for a tax-reform package to be passed by August. The market will also need a friendly Fed and no negative surprises on the geopolitical front.

The bond markets are not exactly in sync with equities. Rates were lower across the curve this past week. A much improved economy would likely see higher, not lower, interest rates. The 10-year treasury yield is now at the lowest level since November. The German two-year note now yields -0.95%, close to a record low.  However, unless lower interest rates are foretelling a recession down the line, they do help provide support for higher equity values. 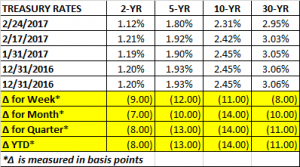 The US auto loan market has risen at a faster rate in recent years than most other types of consumer credit and now those loans are showing signs of stress. Delinquencies are up to the highest level since 2009 and are expected to get worse. Auto loans outstanding total about $1.1 trillion, significantly less than the $8.9 trillion US mortgage market. About 1/4 of auto loans are considered subprime. Most of the pain will be felt by smaller tier lenders, but companies like Capital One and Ally have exposure. 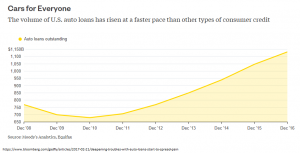 Existing home sales rose to the highest level since February of 2007 in January. Sales were up in three of four regions across the US. Sales only fell in the midwest. Inventories hit an all time low, at 3.6 months, indicating a tight market.

Jobless claims rose by 6k to 244k, but that is still a very low number and shows that the labor market is close to full employment.

The debt ceiling comes up for renewal in March. No one is talking about it but this is a complication that the Trump will have to get through.

US equity markets continued their advance, adding about 1.5% for the week. The markets are up almost 5% year to date and up about 10% since the election. International markets were up about 0.5% on the week, bonds were down slightly, the USD was flat and crude was down.

The VIX (the volatility index) is at multi-decade lows. The SP500 has now gone 89 days without dropping more than 1%.

From a technical standpoint, the market is overbought. There all kinds of indicators out there detailing that, but one that we follow is called Wilder’s RSI. This metric is an oscillator that looks at recent price action and turns that data into a number from 0 to 100. The number 70 is often used to indicate an overbought condition. We use a 21-day RSI and it cracked the 70 level this week. Getting north of 70 has been a rare occurrence this decade, and it has sometimes led to a selloff in the market (see the blue vertical lines below). 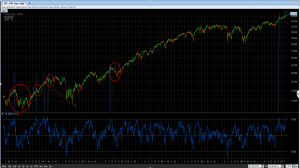 We are also overdue for some kind of sell off. By our count, it has now been 235 days since the end of the last sell off of greater than 5%. That is the second longest streak since 2005. The longest was 252 days in 2007. 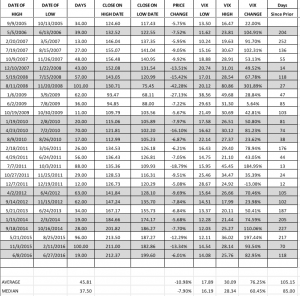 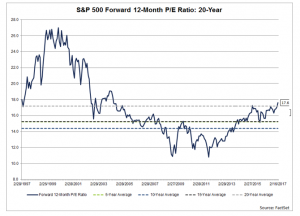 The Atlanta Fed’s GDPNow model forecasts 2.40% for Q1. That is down 0.30% from last week. The NY Fed’s Nowcast model remained steady at 3.10%. Negative news from industrial production and capacity utilization was offset by positive news from surveys and housing and construction data.

The Conference Board’s Leading Economic Index increased by the most in two years, up 0.6% for January. The six-month rate of change in the LEI was up 1.6%, the most since July of 2015. This indicates a strengthening economy later this year.

The next chapter of the Greek debt crisis is on the way. Another bailout program is needed and some European governments are hesitant to give more money to Greece without IMF support. But the IMF won’t help unless Greece commits to a budget to its liking. Something Greece is not inclined to do at this time. If the IMF does not participate, that is considered a signal that the Greek budget doesn’t add up. And that could mean trouble for the Euro.

The market continued its relentless pursuit higher, making it 84 trading days without a decline of 1% or more. This despite all the craziness in Washington and around the world. Favorable earnings news, improving global economic data and the hint that a “phenomenal” tax plan is a couple of weeks away are what the market is concentrating on.

US equity markets were up about 1% and international equities less than 1/2 of that. The dollar was up 0.65% and crude was flat.

We do not know the details of Trump’s corporate tax plan, but some form of a border tax is a possibility. A border tax would likely negatively impact SP500 earnings, since many of those companies rely on imports. The flip side is that the corporate tax cuts would probably offset the lost income from the border tax. However, the law of unintended consequences could come into play as US companies have built up intricate supply networks that count on the free flows of good into this country without a tax or tariff.

There is also talk of eliminating interest deductibility which would hit earnings.

We do need corporate tax reform but as they say, the devil is in the details.

FOREIGN INVESTORS BACKING AWAY FROM TREASURIES

Foreign investors have been reducing their exposure to US treasuries due to a combination of higher US deficits, more inflation, higher interest rates down the road and the Trump effect. For the United States, less foreign ownership of treasuries, in and of itself, will push interest rates higher. 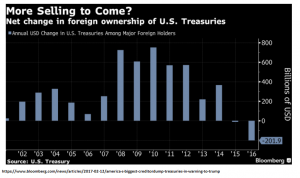 China’s foreign currency reserves have dropped to just under $3 trillion from $4 trillion in 2014. China has been using their reserves to try to keep the value of yuan from falling even faster than it has. Worried about more depreciation, Chinese citizens have been trying to move currency overseas, which of course leads to even further depreciation. There is always the possibility that at some point the Chinese government will halt their efforts to prop up the yuan and let it find its natural level. A big drop in the yuan could lead to a market selloff as it did at the beginning of 2016.

One positive note in relation to China is that Trump has backed off on some of his saber-rattling in the last week and even wrote a letter to the Chinese leader promising a “constructive relationship.” 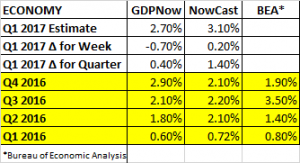 Initial claims for unemployment continue to fall hitting the lowest level since November of 1973 at 234k.

The market made a u-turn mid-week, falling by slightly on Monday and Tuesday and then finishing in rally mode. Overall, US equities were up slightly, +0.22%. Trump’s announcement on Friday that he wanted to cut financial regulations helped the big banks surge in price, and that got equities into the black for the week.

International equities continued to outperform, +0.50%. The US dollar was down and crude was up.

The GDPNow came out with their first estimate for Q1 growth at 2.3% on January 30th, and it was quickly bumped up to 3.4% on February 1 after positive reports from the Institute for Supply Management (ISM) and the construction spending report from the U.S. Census Bureau. The NowCast forecasts Q1 growth at 2.90%. For Q4, the final GDPNow forecast was for 2.9% growth and the Nowcast  was 2.10%. 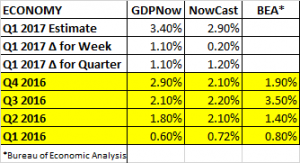 Midweek, the Fed announced in would not raise interest rates at this time. Rates were flat for the week. 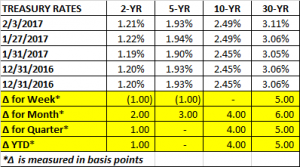 Nonfarm payroll employment increased by 227k. Private payroll was up 237k and government payroll declined by 10k. It was the biggest gain in six months. But the two previous months were revised down by 39k. The unemployment rate increased by 0.1% to 4.8%, but that was due to an increase in the labor force participation rate, which bumped up to 62.9% from 62.7%.  And year over year increase in hourly earnings advanced by 2.5%, down from 2.8% in the prior report.

The slight uptick in the unemployment rate and the subdued increase in hourly earnings gives the Fed some more breathing room on increasing rates, for now. But as the chart below shows, manufacturing input prices are rising around the world and that is likely to show up in prices down the road. 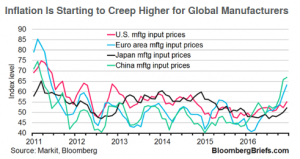 Initial claims for unemployment declined by 14k to 246k.

Retailers and those that sell through retailers are a weak spot that might start rippling through the economy. This past week, Under Armour shares dropped 29% on slower sales growth, Ralph Lauren fell 13% and Deckers Outdoor plunged 21% on an earnings miss.