Stocks cut right through support established by previous lows earlier in October, June and late May. The next level of support is around the 2580 area on the S&P 500, about 3% lower from here. According to Ned Davis Research, bear markets that occur within an environment without a recession normally stop after a drop of about 20 to 25%. That doesn’t mean we fall that far, or can’t fall further, but that level has some historical support.

The US economy still looks good and at least so far, there does not appear to be a recession on the immediate horizon. The Commerce Department reported that in its initial estimate of Q3 GDP growth, the economy expanded by a solid 3.5%. Consumer spending was up by 4% in the third quarter, the best reading since 2014. And in more good news, the PCE price index, a measure closely watched by the Fed, showed inflation at 1.6%, less than the expected 2.2%.

But worries abound, the Fed is looking at four more interest rate increases of 25 basis points by the end of 2019. The drawdown of the Fed’s balance sheet continues, $271 billion over the last year and it continues at the rate of $50 billion per month. The trade war with China is starting to get more and more play as companies report earnings and discuss their outlooks going forward. There is the uncertainty regarding the midterm elections, the threat of a recession in the next year or two, budget problems in Italy, and the messy coverup of a murder by Saudi Arabia.

At this point though, the decline is taking on a life of its own and might be dropping for technical and psychological reasons as selling begets more selling. Valuations are starting to look reasonable. If 2019 earnings estimates can hold at the current levels, the S&P is only selling at about 15x earnings. Traditionally though, earnings estimates decline as the period approaches.

A JP Morgan model that predicts the chances of a recession has the US at about 28% within one year and 60% in the next two years. Going out three years, the odds increase to higher than 80%.

Sales of existing homes in the US were down by 3.4% in September from August, and 4.1% year over year. It was the seventh consecutive monthly decline. Higher home prices and interest rates are getting the blame.

The red-hot Canadian housing market is also slowing down. According to the Canadian Real Estate Association, “About 70% of local markets were down on a y-o-y basis, led primarily by declines in major urban centres in British Columbia, along with Calgary, Edmonton and Winnipeg.” Home buying was down in September, year over year, by 8.9%, it was a six-year low for September. Vancouver, the hotbed of the Canadian boom, was down by 43%. The average sales price was basically flat, up by 0.2%.

While the US has also experienced a slow down in real estate sales, Canada has a bigger threat in terms of valuation. According to Steve Saretsky, a Canadian real estate analyst, the average home sales price in Canada is $371,000 (USD) versus $296,800 in the USA.

US stocks were flat and international equities fell by 0.45%. While US stocks pretty much ended the week where they started that hides the fact that it was a wild week in between. Stocks were up by 2.2% on Tuesday on strong earnings reports and down by 1.45% on Thursday on geopolitical concerns. Bonds were down by 0.36% as interest rates about 5 basis points across the curve.

Solid earnings led to a massive rally on Tuesday, but overall, estimates of further increases in future earnings have stopped. This week, estimated earnings were revised down for 2019 and 2020. Earnings should still be up nicely in each of those years, but the consistent revisions up that we have seen for the past couple of quarters appears to be ending.

There were 7.136 million job openings on the last day of August according to the Labor Department. That is 902,000 more than the amount of Americans who were actively looking for work. Prior to March, job openings were never greater than those looking for work in the entire 17-year history since these statistics have been kept. The labor market continues to be extremely tight.

While the US economy continues to look strong, the same cannot be said around the rest of the world. There is a rising risk of a global recession.  Equity markets often move in the same direction as economies around the world. When most countries leading economic indicators are operating above trend markets are generally rising. Likewise, when most countries are operating below trend, markets often fall.

The percentage of OECD countries (36 countries) with leading indicators above trend has dropped to 40% (see the red line below). In the big market sell-offs of 2000 and 2007 (see the black and gray lines below), economies deteriorated around the world to the point that almost every country was operating below trend when measured by the leading indicators. However, two times in recent years, the trend stopped at about 25%, and market rallies resumed without colossal sell-offs. 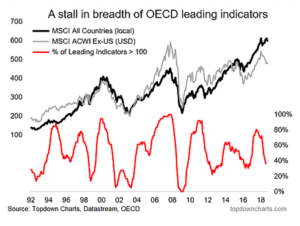 The once-proud retailer Sear filed for bankruptcy. Sears has been headed in one direction, down, since hedge fund manager Eddie Lampert took over. This was more than just the impact of Amazon. Lampert did not invest in stores, Sear bought back stock at high prices, while the stores deteriorated. Lampert kept inventories at extra light levels, meaning they were often out of stock, stopped advertising via circulars and basically neglected the stores.

A powerful piece by former British Prime Minister John Major about what he believes to be the truth about Brexit and the problems with the political extremes (in Britain and everywhere else).

Stocks fell hard on Wednesday and Thursday, leading to a 4.24% decline in the US and 3.52% for international equities on the week. US stocks have now fallen 6% since the September 20 high. Small stocks, which hit their high on August 29, entered correction territory on Thursday, down 10.3%, before a small rally on Friday.

With the 6% drop, the S&P has now fallen by more than 5% off its peak for the second time this year. This has happened nine times in the last 12 years. So a drop of 5% or more at least two times during the year is nothing out of the ordinary. But that doesn’t matter it can’t get worse from here.

Higher interest rates took some of the blame for the drop in prices. President Trump was leading the bandwagon, saying that the Fed was “out of control” for raising interest rates. Trump also stated that “I think I know about it better than they do” in regards to monetary policy. So maybe Trump should double as Fed Chair also. We wrote back on July 22 that Trump was setting up Fed Chair “Powell to be the fall guy” in the event the economy was to slow down. But if higher interest rates were to blame, it was the long end of the curve that seemed to cause most of the concern. The Fed has more of an influence on the short end.

While the US economy continues to look strong, the global outlook has weakened. In a new report, the International Monetary Fund wrote that “downside risks to global growth have risen in the past six months and the potential for upside surprises has receded.”  The IMF now projects global growth at 3.7% for 2018-2019, that is down from 3.9%. The IMF wrote that “In the United States, momentum is still strong as fiscal stimulus continues to increase, but the forecast for 2019 has been revised down due to recently announced trade measures.”

You can throw in earnings fears into the blame group. PPG, the maker of paints and coatings, revised their earnings outlook lower. The company said that rising costs for raw materials and oil, as well as lower demand from China, are impacting profits. The stock fell 10% on the news. Overall earnings estimates for the S&P 500 for 2018 reached their peak on September 14 at $162.25 according to Thomson Reuters, and have since fallen slightly to $161.79. 2019 estimates have also fallen, again, just slightly, by 0.23%, since September 7. But previous to September, estimates had been on a slow climb higher for several months. So the subtle change in earnings estimates might be hurting the market.

One positive signal is that as stocks have fallen, at least one valuation metric is now on the undervalued side. The forward p/e ratio for the SP500 is now at 15.7, versus a 16.1 long-term average. However, higher interest rates and further inflation could push future earnings estimates down.

Markets were down across the world this week. US stocks dropped by 1.34% and international stocks fell by 2.70%. There were two big stories this week. First, the US and Canada agreed to a new trade deal, taking a trade war off the table between the two countries, although the agreement must still be ratified by the respective legislatures. The second big story was the pop in interest rates at the end of the week. That led to a decent size sell-off on Thursday and Friday. Other factors that hurt the market was the rise in Italian bond yields due to a rising deficit that is not in line with the European Union. Oil prices continued their upward rise, climbing another 1.5% on the week. Brent crude is now at $86 per barrel which is a 2018 high. And it was reported by Bloomberg that China planted chips on computer motherboards to spy on US companies, raising tension between the US and China another notch.

Bond yields spiked this week. The 10-year jumped by 18 basis points to close at 3.23% and broke out to a new high. Matching levels that were last seen in 2018. Strong economic data, and an unemployment rate that dropped to the lowest level since 1969 point to continued rate hikes down the line, more than the market had been anticipating.

The US and Canada agreed on a new trade pact to replace NAFTA. The next step would be getting it approved by Congress and the Canadian legislature, probably early in 2019. On the surface, the agreement appears to be pretty much the same as NAFTA, with some minor changes. But one thing for sure, the agreement is much better than no agreement at all.

Multinational companies will be able to keep together their intricate mix of supply chains between the US, Canada, and Mexico. The agreement also opens up new markets for US dairy farmers. Duty-free cars will now have to have 75% of their content produced in North America and 40% manufactured by labor being paid at least $16 per hour.

There will continue to be an independent dispute-resolution system. With this pact out of the way, Trump can now concentrate on China.

Nonfarm payrolls were up by 134,000 in September, which was less than the consensus estimate of 180,000. It was the smallest gain in one year but was probably impacted by Hurricane Florence. Also, the prior two months were revised up by 87,000. The unemployment rate dropped to 3.7% from 3.9%, the lowest rate since December 1969. Average hourly earnings were up by 2.8%. The job market remains extremely tight.