Stocks finished November with a 5.6% gain and, combined with October, advanced by 14.1%. That, according to analysts at Bank of America, places the rally in the 98th percentile, since 1936, for two-month gains. For the week, the US market was up by 1.22%, and international stocks advanced by 2.30%, bonds rallied by 1.50% on lower interest rates. Powell said during the week that the Fed would raise rates by 1/2 point in December, which had a big part in the market rally.

The average forecast of analysts tracked by Bloomberg for the S&P 500 in 2023 is negative for the first time since 1999. The average projection is for a decline of about 1%. Dating back about 100 years, a market decline two years in a row has only happened four times.

Jobs increased by 263,000 in November, indicating the job market is still strong, despite lots of crosswinds in the economy. The unemployment rate held steady at 3.7%. Average hourly earnings were up by 5.1% year over year. The strong report keeps the Fed on target to raise interest rates by one-half point at the next meeting. But not all is perfect; some companies have started laying off employees, and economists expect higher interest rates to lead to more layoffs. The savings rate is also falling, hurt by higher prices. In October, the personal saving rate was 2.3%, the lowest level since July 2005.

Home prices fell for the third straight month. It was the first time that had happened in almost four years. Prices were 1% lower in September compared to August, and the index is now off by 2.6% from June. However, compared to prices one year earlier, they are still 10.6% higher but down sharply from 12.9% in August.

It was a big Thanksgiving week for brick-and-mortar shoppers. Visits to physical stores were up 17% compared to a 2% increase for online shoppers. Retail sales from Thanksgiving to the following Sunday were up by 10.9%. Cyber Monday sales rose by 5.8%.

Producer prices were up by 8% compared to last year, which was lower than 8.4% in September and 11.7% at the March peak.

The spread between the 10-year and the 2-year treasury has reached its highest point since the early 80s at 69 basis points. Such a differential was a precursor to recessions in the past. Meanwhile, Q4 looks on track for solid growth. The Atlanta Fed’s GDPNow model has Q4 growth at 4.2%. There was also a strong retail sales report, up 1.3% in October, the best gain since February and higher than the 1% consensus.

The incredible FTX saga continues. It turns out the financials are a complete mess. John Ray, who took over as CEO and is a restructuring expert, said “never in my career have I seen such a complete failure of corporate controls and such a complete absence of trustworthy financial information.”

There appears to be $900 million in marketable assets against $9 billion of liabilities just before the bankruptcy filing. There were minor cryptocurrencies held on the balance sheet for big amounts that had negligible value. Supposedly Serum was recorded at $2.2 billion but is worth less than $100 million if even that. Furthermore, Serum was a token that FTX created (read Matt Levine’s article at Bloomberg for much more).

Tracy Alloway from Bloomberg writes about the collapse of FTX, the comparison to the Beanie Baby phenomenon in the ’90s, and how when speculation collapses, all that is left is the utility value, and if there no utility value, that means $0.

A big week for stocks worldwide as the inflation report came in slightly less than the consensus estimate. US markets were up by 5.94%, international stocks increased by 6.73%, and bonds rallied by 2.30% on lower interest rates. The October consumer price index was up by 7.7% compared to last year, below the estimate of 8%, and lower than the September print of 8.2%. Investors also will get a split government, as it looks like the House will slide just barely to the Republicans, and the Democrats will keep the Senate. That formula has generally worked out well for investors.

But the Republicans certainly were not happy with that outcome. It was a big underperformance given all the cards stacked up in their favor. At some point, the Republicans have to finally get the message, that Trump has been a disaster for their electoral hopes since he was elected back in 2016. In the 2018 mid-terms, despite a strong economy, the GOP lost 41 house seats. He lost the 2020 presidential election. When it was discovered that he was pressuring state officials in Georgia to turn the vote in his favor, his actions probably cost the GOP the Senate runoff. And then this past week, most of his endorsed candidates failed miserably in elections that would have been winnable with normal, sane candidates. Despite high inflation, high mortgage rates, the threat of a recession, and an unpopular President, it looks like the Democrats will only lose about 11 House seats, and they held on to the Senate, in what should have been a big year for the Republicans.

The Crypto world continues to fall apart. In an incredible turnaround from King of the block (chain) to bankruptcy, FTX disintegrated in five days, and CEO Sam Bankman-Fried, who was doing a good white knight impersonation of JP Morgan from 1907 just a few months ago, went from a net worth of $25 billion to $0 in a flash. So far the crash hasn’t spilled over into the traditional financial markets but time will tell. 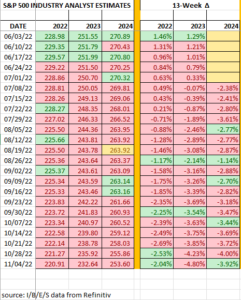 Another incredible week as US stocks rose by 4.16% and are now up 8.81% for the month; this is in the face of what is almost certainly another 0.75% increase in the fed-funds rate this week. Or maybe the market is looking ahead to what often is a market rally after the midterm elections. According to the Stock Traders Almanac, the Dow has averaged a gain of 46.8% since 1914 from the midterm low to the pre-election year high. But that metric will undoubtedly be tested by a Fed focused on slowing the economy until inflation fades.

The Dow is up 14.4% for the month, and assuming nothing crazy on Halloween, will turn in its best performance since January of 1976.

Except for Apple, big tech missed on earnings. Microsoft scraped by with a small beat, but disappointed investors with its outlook, Alphabet’s revenue fell short in the advertising category, and Meta missed on overall sales.

Stocks managed to advance by 1.63% for the week. The market was strong at the beginning of the week on another hope that the Fed will pivot sooner rather than later, but as that became apparent that was more hope than real, the market fell hard at the end of the week.

Employers added 263,000 jobs in September, less than the 315,000 added in August and lower than the six-month average of 400,000, but more than the consensus estimate. The unemployment rate fell to 3.5% from 3.7%, matching a half-century low. The labor force participation rate declined. The stronger than expected report sparked another sell-off in the markets, worried that the slowdown in forthcoming interest rate increases in now further away. The S&P dropped by 2.8% and the Nasdaq fell by 3.8%.

Cracks continue to appear in the economy. AMD, Samsung, and Micron Technology have all issued weak forecasts.