US equity markets fell by about 1%, but international markets rallied by .68% and bonds were up .62% as interest rates dropped across the curve. 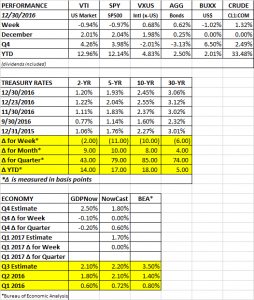 More indications that confidence is up. The Conference Board’s Consumer Confidence Index hit is highest peak since July of 2007. What was interesting is that confidence was up significantly for those 55 and over but down even more for those under the age of 35. 44.7% expect stock prices to increase, the most since January of 2004.

The Fed raised interest rates for the first time in a year by 1/4 point. That increase was expected. What was not expected was that the new “dot plot” shows three hikes next year, not the two that had been anticipated. Even with that, the equity market took the news in stride and there was no major sell off. However, treasury yields did jump. 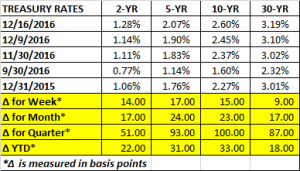 The Atlanta Fed’s GDP model remained unchanged for Q4 growth at 2.6%. However, the NY Fed’s Nowcast tumbled by 0.90% to 1.80%. The move lower was led by negative reports for capacity utilization, industrial production, and housing data. The Nowcast also came out with their initial Q1 forecast for 2017 at 1.70%. Growth estimates have been falling off. As recently as 11/25 GDPNow forecast Q4 growth at 3.6% and the Nowcast was at 2.50%.

The news is better on the international front. The percentage of individual-country manufacturing PMIs that expanded in November was 78%, the highest level since April of 2014. 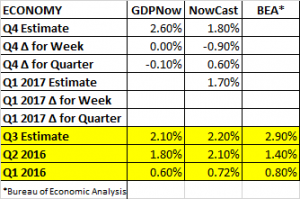 More confirmation that optimism continues to surge in light of the Trump win, the National Federation of Independent Business said its small-business optimism index jumped 3.5 points to a seasonally adjusted 98.4 in November, the strongest monthly gain since April 2009. This is in line with several other sentiment type polls.

A STRONG POST-ELECTION RUN IS NOT ALWAYS GOOD NEWS

AND REPUBLICAN TAKEOVER OF THE WHITE HOUSE IS NOT ANY BETTER 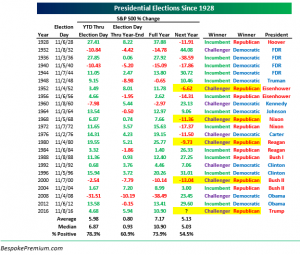 China is an area of concern and has the potential to set back the market on multiple fronts. Barron’s cover story this week is on the danger of a trade war set off by Trump, “If he were to make good on his most aggressive tariff threats, we could plunge into a major global recession.” Then you have the issue of the plunging Chinese currency, the controversy over Taiwan, and now the stolen drone.

The California Public Employees’ Retirement Systems (CALPERS) is going to meet on Tuesday about lowering their 7.5% investment goal to 7% or 7.25%. They think a 7.5% annual return is unrealistic in this environment. Lowering the goal has real life consequences for cities and municipalities all over California and really everywhere has many other pensions funds follow the CALPERS lead. By lowering the goal, any drop in expected investment returns would have to be made up with more contributions from the employers (the municipalities) which would mean some combination of spending cuts, higher taxes, more borrowing.

It was back to the races as equity markets around the world shot higher. US markets were up 3.39% and international was up 3.15%. Bonds fell again, down 0.17%. The dollar was up and oil was down.

It feels like a mad dash higher, and the sentiment is that this will continue at least through year end. The Dow, closed at 19,756, and investors consider it a given that it will hit 20,000 any day.  A lot of the Dow advance is powered by Goldman Sachs (GS). The Dow is weighted by price per share so Goldman, at $241 per share, accounts for 8.4% of the Dow. GS has rallied 32% since the election resulting in a gain of 408 points.  By contract, the next biggest contributor since the election is UnitedHealth (UNH) with 103 points.

Optimism is extremely high. CNN measures sentiment through their Fear & Greed Index and the most recent reading is “extreme greed.” This compares to one month ago, when the gauge was marked “fear.” 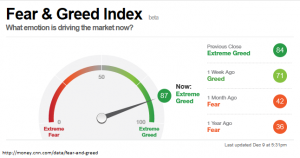 The Volatility Index (VIX) closed at 11.75. That is a very low reading. The last time the VIX went below 12 was for a few days between September 2 and September 7 when the SPY was about $219. That turned out to be a high and the market then sold off to $208.55 through the election.

Treasury rates were up during the week. But in a change, the long-end of the curve increased less than the short-end. 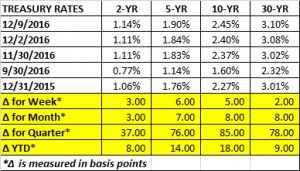 For the second straight week, the Atlanta Fed’s GDPNow model for Q4 growth declined, falling to 2.6%. Two weeks ago, growth was forecast at 3.6%, so there has been a big drop in just two weeks. A lower estimate on the contribution from inventory investment accounted for much of the change. The NY Fed’s Nowcast remained steady at 2.7%.

More signs that the Trump win is increasing confidence, the Duke University/CFO Magazine Business Outlook Survey hit its highest level since the first quarter of 2007. CFOs cited regulatory and corporate tax reform for the improved optimism.

Healthcare has been a big drag on the economy for years and it is only getting worse. The video below summarizes the negative impact on the US economy.

Click here for video of healthcare of US economy.

The three-week post election win streak ended. US equities were down by 1.08%, international equities were flat and the aggregate bond index declined just slightly. The dollar was also down.

Energy shot higher by 12% on news of an OPEC production cut.

Financials have been the leading sector since the election and utilities the worst. That is in line with historical sector performance during periods of rising rates as shown on the graph below. 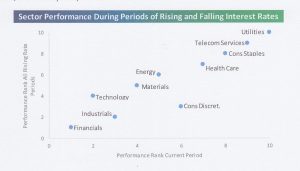 Trump had done a decent job acting presidential since the election. But some of his bad habits have reemerged over the last week. He started making some not so presidential type comments on his Twitter account. Writing that “millions of people” voted illegally. This sweeping statement was made without a shred of evidence. He started attacking individual reporters, attacked individual businesses and threatened 35% tariffs on businesses that move out of the country. This is how third-world dictators act and if it keeps up, it could threaten economic progress and have a negative impact on investor sentiment. Trump even attacked the SNL skits (and he was serious).  This market rally has been built on the positives of the Trump agenda with the hopeful thought his temperament would remain under control and his worst instincts on trade would be held back.

The US unemployment rate fell to 4.6%, the lowest level since 2007, due to a decline in the workforce. Jobless claims rose to 268k. That is higher than recent reports but still historically low. The economy did ad 178k nonfarm jobs in November, October was revised down to 142k from 161k.

Q3 real GDP was revised up to 3.2% from 2.9%. That was the strongest increase in two years. Real GDP is now on track for 1.8% increase for the year, but that does not include Q4, which so far is projecting in the 3% area.

For Q4, GDP estimates came down to 2.9% from 3.6% on the GDPNow model.  But the Nowcast model increased their Q4 estimate to 2.7% from 2.5%. Positives for the Nowcast model included the strong labor report and better domestic income numbers, offset by negative news on personal consumption expenditures.

The Conference Board’s Consumer Confidence Index hit 107.1 in November. That is the highest level since July of 2007. As we wrote a couple of weeks back, “animal spirits” are in the air.

There are more emerging signs that the European Union might be in trouble. A referendum vote today (12/4/16) in Italy rejected constitutional changes designed to streamline lawmaking and boost competitiveness. This was a win for the populists. However, in Austria, voters today rejected the presidential bid of a right-wing populist who was against immigration.