Stocks were flat for the week but the “Everything Up” market is still in command. Lumber, residential homes, stocks, bitcoin, dogecoin, Gamestop, SPACs, etc, if not at an all-time high, these assets were just recently. The rallies can continue, there is lots of momentum, lots of dollars floating around, and about the easiest Fed that anyone can remember.

But there are some factors that might at least put a pause on the rally. Biden’s proposed capital gains tax is one, he proposed upping the tax on wealthy Americans to 43.4%, higher than the rate on wage income.

Both bitcoin and US stocks took a minor hit on the announcement, although stocks recovered by the weekend.

Excessive leverage in the system is a threat. Sometimes it shows up out of nowhere. Investments that went against Archegos Capital Management, which was wildly leveraged across multiple firms, caused $10 billion in losses. How many other Archegos’s are out there? How much leverage is tied up in bitcoin? What about in stocks?

Total margin debt closed out February at an all-time high. The 49% increase, year over year, was the fastest increase since 2007. 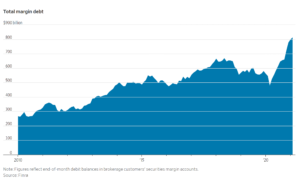 But on the plus side, the economy is beginning to boom. Of course, it has been helped by trillions in government and Fed stimulus. Morningstar, in line with other forecasts, just upped their read GDP for estimated growth to 6.2% this year. 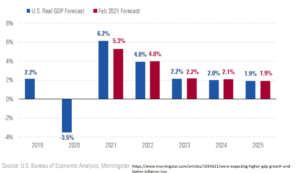 And unemployment claims are starting to fall fast. 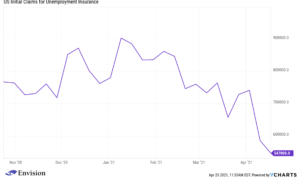 The first quarter closed on Thursday. US stocks registered a 6.5% advance followed by international stocks at 4.5%. US bonds fell by 3.6% due to the fast run-up in interest rates. The yield on the 10-year treasury increased by 81 basis points or 89% during the quarter. Bitcoin just about doubled. High-interest rates, and more acceptance of bitcoin as an alternative to gold, impacted the yellow metal, which fell by 10.3%. The commodity oil was the leader for the second quarter in a row, up by 22.3%.

The economy received excellent news on the job front as hiring surged in March. Job increased by 916,000 during the month and the unemployment rate fell to 6%. Infections have turned slightly up in the last couple of weeks, but they are way down for a few months ago, and as more and more Americans get vaccinated, consumer confidence is increasing with the feeling that the end of the pandemic is near. The surging jobs numbers, along with positive momentum in the economy, reenforced the question of the need for the recent $1.9 trillion stimulus bill.

Biden announced the first part of his $2.3 trillion infrastructure plan, to be spent over 10-years. It includes $600 billion for traditional infrastructure projects like roads and bridges. Then there is $374 billion for broadband access, modernizing the electric grid, clean energy, and electric vehicles. $480 billion for manufacturing and research and development. And $500 billion for caregivers and workforce development. The plan would be financed by higher corporate taxes and Biden claims the plan would pay for itself within 15-years.

Hedge fund Archego imploded this week. The fund had $10 billion under management but market exposure of $30 to $100 billion. The fund was brought down by excessive leverage and concentrated positions.