The US equity markets turned in another solid week, gaining about 1.5%. International markets did even better, +2.34%. Bonds fell slightly, the dollar was even and crude was off boy 0.6%.

Very strong earnings are moving the markets higher. According to FactSet, as of Friday, the blended earnings growth rate is 12.5%, above the 9% estimate at the beginning of earnings season. This would be the first time since Q4 of 2011 when the SP500 companies reported a double digit earnings increase.

The market is still trading in a range of between 2280 and 2400, and it will have to crack the 2400 line (orange line above) to possibly begin another leg up.

Trump proposed an outline for an aggressive tax plan. He is leaving it up to Congress to fill in most of the details. The plan would cut tax rates on corporations from 35% to 15%.  There would be a one-time “amnesty” rate of 10% to encourage repatriation of about $2 trillion in profits that US companies have been keeping overseas. The proposal to get those dollars back into the US is a good idea and both parties should support that. The plan also taxes only domestic profits, another smart proposal.

The tax cut would also apply to “pass-through” entities like Sub-S corporations. That would give the pass-through entities a big tax advantage over regular corporations since income on corporate profits is eventually taxed two times, while a pass-through is taxed one time.

A corporation is taxed on its income, and then its shareholders are taxed at some future point on dividends and taxable gains. The tax proposal calls for a 15% corporate tax and a 20% dividend/capital gains tax. For $100 of income, the corporation will pay $15 in tax. That would leave $85 in the business. Let’s assume that $85 is paid out as a dividend, it will get taxed on the personal level at 20%, resulting in another $17 in tax for a net of $68. Meanwhile, the same pass-through entity investor would net $85.

One of the main ideas of reforming the tax system is making it equitable and easy to understand. The pass-through advantage does not do that. That needs to be corrected.

The other huge issue is that the plan would result in trillions in lost revenue. Of course, the argument is that the economy would grow faster, and that would eventually result in most of the lost revenue being recovered. The proposed cuts are too deep and too risky given the country’s fiscal situation.

In sum, the plan won’t pass as proposed but it is a starting point.

The Commerce Department reported that GDP growth in Q1 was 0.70%, the lowest reading in three years, and not a good start to the Trump era. This is the initial reading and it will be revised down the line, but it continues the string of weak Q1 growth that we have seen over the past several years. 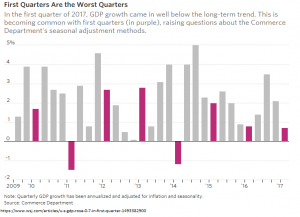 Trump has promised to get growth to 3% plus. That is a tall order. But Q2 growth is expected to improve. The NY Fed’s NowCast currently has Q2 growth estimated at 2.3%, plus 0.20% on the week on positive news on manufacturing and housing data.

On a positive note, wages grew at the fastest rate since Q1 of 2007.

We spoke about this at our quarterly webinar (click to view), trends in consumer debt are turning negative. Credit card lenders are reporting more losses. This is probably the result of leaner credit standards and overspending by consumers. The subprime market is where the hits are being taken and the threat is if there is a spillover effect. 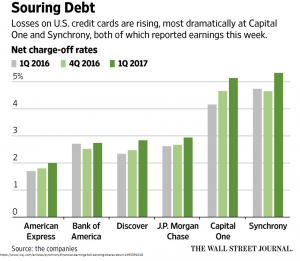 The market has been ignoring North Korea but the heat is rising. Secretary of State Rex Tillerson addressed the U.N. on the need to step up pressure on North Korea. A U.S. nuclear submarine has arrived at a South Korean port. On Saturday, North Korea launched conducted another missile test. Like the one prior, it failed. Trump would not rule out the use of military force in an interview on “Face the Nation” on Saturday.

One investment that might benefit from a major geopolitical event like North Korea would be gold. The Gold Miners ETF (GDX) is off 8.2% from its recent peak in mid-April.

The US equity markets advanced by about 1%, and in the process, at least for now, broke the recent downtrend.  International equities were up 0.55%, bonds were about even, the dollar declined and crude fell by 6.7%.

This week will start on a positive note as France’s pro-growth candidate Emmanuel Macron finished first in the Sunday election and advances to the runoff with nationalist Marine Le Pen. Macron is favored and a win will keep the Eurozone intact.

The market has been advancing in a stair step fashion. It trades in a sideways manner, breaks out, then enters another consolidation phase, and then breaks higher again. That might be continuing.

Earnings appear to be on target for an approximate year over year increase of about 11%. Excluding energy, about 7.5%. Improving earnings will work down some of the excess valuation in the traditional ratios like price to earnings, price to sales and price to book.

Trump just complicated the process of keeping the government operating. The government runs out of money on Saturday and a deal must be passed to keep the US in business. Trump is now demanding that the legislation include funds for a border wall with Mexico. That is a deal-breaker with the Democrats and will make it more difficult to avoid a government shutdown next weekend.

Initial jobless claims came in at 244k, a low number. Existing home sales were up 5.7% year over year. Industrial production rose by 1/2% month over month. The flash PMI composite estimate fell to 52.7 from 53.2 That is down but still above 50, indicating growth.

The Trump administration announced that it is opening up a probe into steel imports, indicating that national security might require a cut in imports. The trade law cited to justify the cut in imports requires a study that will be submitted to the Commerce Department that assesses the legitimacy of the national-security claim.

It is one thing to retaliate against a company that is “dumping” product with the help of government subsidies, it is another to implement across the board cuts that impacts even those that compete fairly. Such an across the board cut would possibly result in retaliation against other US manufacturers.

Cutting imports would allow US manufacturers to increase steel prices even further. Manufacturers ramped up prices last year after the government imposed duties on imports from some companies in China and elsewhere. US steel prices are already among the most expensive in the world and impact a wide range of businesses that are the consumers of steel. There are about 60 workers in steel using industries for every steelworker in the US. A mismatch which shows that such an across the board cut might not past a true cost/benefit test. 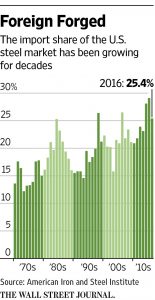 Trump officials plan to release a tax overhaul plan soon. The plan would concentrate on business first (corporate and pass-through entities) and leave individual tax reform for after.

These articles explain the concept of positive skew and how it makes beating a benchmark so difficult.

The math behind the futility.

Do stocks out perform treasury bills? 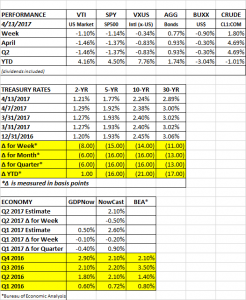 US equities fell slightly, down 0.36%, but that was a good performance given the market was hit with a batch of negative news. On Wednesday, North Korea launched another test missile, on Thursday, the US fired 59 Tomahawk missiles into Syria in response to deadly chemical attacks against its own citizens, and on Friday, in another example of our dysfunctional government, the Republicans eliminated the filibuster rule for Supreme Court nominations.  Then there was the payroll report that came in much less than consensus. This market continues to show good resilience in not falling in the face of negative news. But while the market has not been falling, it has also been having a hard time going higher. There were only 72 NYSE stocks at new highs this week, compared to 338 on March 1.

International stocks were down 0.48%, bonds were up slightly, the dollar was up by 0.61% and crude, helped by the missile strikes, advanced 2.83%.

Non-farm payrolls increased by 98,000, well below the consensus estimate of 175,000 and down from a revised 219,000 in February. Weather might have been a factor as the northeast suffered from a major blizzard.  There might be a seasonal factor at work, the March report has missed consensus number in five of the last six years. The unemployment rate dropped to 4.5% from 4.7%. Average hourly earnings were up by 2.7%

Initial claims for unemployment dropped by 25,000 to 234,000. Claims as a share of the labor force hit a record low in February. Even with the lower hiring number, the labor market continues to be tight.

The Federal Open Market Committee’s March minutes show that the Fed may begin to work down its $4 trillion balance sheet later in the year. This would be accomplished by reinvesting less as issues mature. As of now, the Fed has been reinvesting the proceeds from all maturing issues. The aim would be to accomplish this in a “passive and predictable” manner. However, this would put upward pressure on interest rates.

The Atlanta Fed’s GDPNow continues to sink, estimating growth at 0.60% for Q1, that is down from 0.90% last week and from 2.30% at the beginning of the quarter. The GDPNow estimate continues to diverge from the NY Fed’s Nowcast, which is forecasting more solid growth at 2.80% for the first quarter and 2.60% for the second quarter. 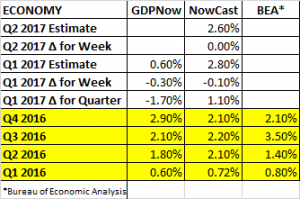 While the consensus was for value to be the place to invest in 2017, so far it has been large cap growth, especially technology, which dominated the first quarter. The QQQ was up 12%.

It might be nothing or it might be the start of a sell-off. The market is overdue for a correction of 5 to 10%. On Monday, the market was off 2.27% from its March 1 peak but had a small rally since. If the market turns down over the next few days, that would be two successive “lower highs”.

Treasury rates were flat for the week. For March, rates rose about five basis points across the curve and year to date, there has been a slight flattening, with the 2-year note up seven basis points and the 10 and 30-year down about five. 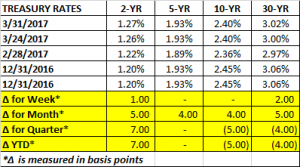 The Trump administration indicated it will seek only modest changes to NAFTA. A major push to cut back on international trade via protectionism would be a negative for growth in the US and around the world. A more modest approach to trade was what the market had anticipated when this rally began in November, and that might turn out to be the case. Although the threat of more aggressive action could still happen as the administration irons out its policies.

The Conference Board’s Consumer Confidence Index surged to the highest level since December of 2000. A high level of confidence has traditionally been associated with better than average growth.

On Wednesday, the UK made it official by triggering Article 50 and letting the EU know that it will be leaving. This begins a two-year period for the UK to negotiate its exit.

Margin debt hit a record in February. More than $500 billion is currently borrowed against accounts. High levels of margin debt indicate investor confidence but is often a contrary indicator that reveals that investors are ignoring fundamentals and concentrating on making a quick dollar. Margin debt peaked before declines in 2000 and 2008. But margin debt as hit record levels several times previously during this bull run with no negative impact.

The GDPNow model forecasted growth for Q1 dropped to 0.9% on declines in estimates for consumer spending growth. The NY Fed’s Nowcast dropped by 0.1% to 2.9% for Q1 and to 2.6% for Q2.

Initial claims for unemployment came in at 258,000.