Fed Chairman Jerome Powell said that future interest rate cuts are possible, but he made it clear that the Fed can only do so much in face of a trade war. “While monetary policy is a powerful tool that works to support consumer spending, business investment, and public confidence, it cannot provide a settled rule book for international trade. “Trade policy uncertainty seems to be playing a role in the global slowdown and in weak manufacturing and capital spending in the United States,” Mr. Powell said, adding that there were “no recent precedents to guide any policy response to the current situation.”

Powell’s comments followed China’s Friday announcement that they would retaliate against the Trump administration’s next round of tariffs by increasing taxes on $75 billion of American imports. Trump, of course, followed during the weekend and said he would increase tariffs on China.

So both countries continue to follow the trade war playbook of each country ramping up retaliation in response to the other. As history has shown it is a war of no winners. And it leads us to believe more and more that Trump has no understanding of economics or how the US has thrived since WWII.

Trump let it be known that he was interested in buying Greenland from Denmark to which the Danish Prime Minister responded that the idea was “an absurd discussion.” Trump got offended and canceled his trip to the country. Following Trump’s comments, Greenland’s Soren Esperson, the foreign-affairs spokesperson for the Danish People’s Party, said: “If it is true he [Trump] works with those thoughts then it is definitive proof that he has gone crazy.” The former prime minister Lars Looke Rasmussen said it “must be an April Fool’s Day Joke.”

Both US and international stocks fell by about 1.1%, down for the third straight week. The entire psychology of the market has changed since Trump’s trade tweet a few weeks ago. Investors are worried about the threat of a coming recession. Stocks are now 4.6% off their recent high from July 26, but there have been some wild days since then. The S&P 500 is now working on 12 straight days of intraday moves greater than 1%.

The yield on the 30-year bond fell to 1.98% on Thursday. That was the lowest yield of all time. Also, on Thursday, the 10-year fell to 1.47%, not far from the all-time low of 1.36% from July of 2016. While the 3-month/10-year curve has been inverted for a while now, the 2-year/10-year also inverted intraday during the week, a recessionary signal. There is now $16 trillion in negative-yielding debt around the world.

Stocks rallied on Tuesday when Trump delayed a portion of the new tariffs that he recently announced. But then the market really got hit on Wednesday, down 2.9%, on weak economic data from Germany and trade tensions. On Thursday and Friday stocks did rally back, on a good retail spending report

Stocks wavered between down, then up, and then down, finally finishing off by 0.44% in the USA and 1.10% outside the US. US stocks got hammered on Monday, falling about 3%, after the Chinese yuan broke through the psychologically important level of 7:1 versus the US dollar. A beggar-thy-neighbor mindset seems to be spreading. World leaders should know better, mercantilist policies have not worked in the past and won’t work this time. Stocks did gain on Tuesday, Wednesday, and Thursday when there was no further escalation in the currency/trade wars and there was actual hope (again) that maybe the countries would come to some sort of agreement. Stocks went into Friday up for the week, but Trump seemed to indicate that China may not show up for a September trade meeting, turning stocks down by 0.7% on the day and off by 0.44% for the week.

The exogenous shock of the trade war, now rolling into a currency war, represents the kind of unique factor that raises the chances of negative unintended consequences.

Stocks lost ground every day this week. On Wednesday, losses were due to Fed Chair Jay Powell’s comments on the rate cut (see further below). But the losses accelerated on Thursday and Friday after Trump announced more tariffs on China. For the week, US stocks were down by 3.13%.

Trump said Thursday he will extend tariffs to almost all Chinese imports effective September 1. The tariffs would hit about $300 billion in Chinese goods
and stretch across a wide range of consumer products. The news shook Wall Street. The Dow, which was up by more than 300 points, dropped to a loss of 281,
falling 1.1% on the day. Oil fell by 8%, the most since February of 2015. The new set of tariffs throws more uncertainty into the future course of the economy, and the most recent Fed rate cut may not be enough to help. Powell said on Wednesday (before the new set of tariffs) that “There isn’t a lot of experience in responding to global trade tensions.” Mainly, because the world has been smart enough to avoid large scale
trade wars since the disaster of the Smoot-Hawley tariffs in 1930. But no longer. These are self-inflicted wounds and if Trump follows through it can’t be good for the economy. Trump’s mindset is that the higher tariffs would put more pressure on the Chinese to agree to a trade deal. But Chinese might be willing to hold out. This is the danger of trade wars, one side makes a move, the other makes a counter move, each time expecting the other country to cave, and then egos get involved, and everyone is too proud to compromise. And with Trump, you are dealing with a major ego who seems willing to sacrifice the entire US economy for a “win”.

We said in our recent webinar titled “Don’t Fight the Fed,” that one threat that could derail this market rally would be a ramp-up in the trade war. Well if Trump follows through on this newest set of tariffs, that would certainly qualify. We are also moving into a time of year (August through September) where a weak August has led to a sizable drop in October (think 1929, 1987, 2007).

The tariffs to date have already hit the global economy, while the US has slowed down (mainly due to tariffs) it is still in a slow moderate growth mode. But how many times can this economy and market take these kinds of hits without a more severe consequence?

Already, recent market peaks have coincided with Trump’s announcements on tariffs. The January 2018 selloff of 10.16% began when Trump announced tariffs on solar panels and washing machines. That was the first big move in Trump’s turn toward protectionism. The selloff of about 20% that began in September of 2018 began when Trump finalized a list of products subject to tariffs on $200 billion in imports from China.

At least there was one piece of good trade news this week. The US and Japan are close to finalizing a limited trade pact that will increase US farm exports to Japan in exchange for dropping the threat of auto tariffs on imports from Japan.

The Bureau of Economic Analysis updated its personal income data on Tuesday and reported that employee compensation rose by 4.5% in 2017 and 5% in 2018. Compensation increased by 3.4% through the first six months of this year. These are upward revisions and above recent trends and indicative of the positive benefits of Trump’s early policies including tax reform which encouraged business investments, and deregulation. All of which occurred before Trump switched gears to concentrate on tariffs.

The Fed cut rates for the first time since 2008 hoping to head off a near-term recession. The market did not cheer the announcement as Fed Chair Powell did not indicate that there would necessarily be follow-through. Powell said the cut was a “mid-cycle adjustment.” The S&P 500 fell by 1.1% for the day.

There is a question if a quarter-point cut is even worth it, Catherin Mann, the chief global economist at Citigroup said, “The real issue facing the global economy is trade uncertainty, and monetary policy is not well-targeted to address that uncertainty.” 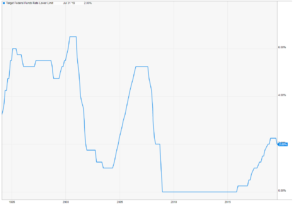