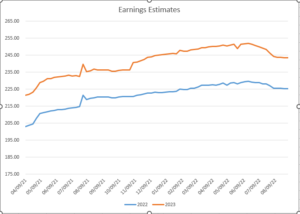 Employment increased by 315,000 jobs in August, down from 526,000 in July. The increase is still considered a solid absolute number but indicates some cooling in the job market. The unemployment rose to 3.7%, up from 3.5%, as more workers entered the labor force. Those seeking work are now at 62.4% compared to 62.1% in July. Average hourly earnings were 5.2% higher than one year ago, consistent with the prior month. And month over month, the increase was 0.3%.

The Group of Seven agreed to an oil price cap for Russian oil, and in turn, Russia suspended natural-gas flows to Europe, although they blamed the stoppage on repairs. The oil price cap relies effectively relies on insurance to enforce its terms. In order to get insurance, buyers would have to observe the price limit. Almost all insurance for these types of shipments runs through G7 countries.

The market’s wishful thinking that the Fed would step off the brakes earlier rather than later officially came to a close on Friday in Jackson Hole when Fed Chair Powell said that “We will keep at it until we are confident the job is done.” Powell made clear that there will be no pivot in strategy anytime soon and that the end goal is to get inflation back to the 2%. Fed officials have made projections that rates would need to get to almost 4% by the end of next year for that to happen. Stock plunged, with the Dow dropping by more than 1,000 points. The S&P 500 dropped by 3.4% and the Nasdaq by 3.9%.

Powell wants to avoid the mistakes of the 1970s and early 80s when the Fed didn’t follow through on interest rate increases and inflation remained a persistent problem until Paul Volker has to raise rates to very high level to break the cycle.

The stock market’s four-week winning streak came to a close as US equities fell by 1.47%. The cheery optimism that the Fed may apply the brakes to aggressive interest rate hikes was notched down a bit based on the release of the minutes from the Fed’s July meeting and comments from central-bank officials.

Bed, Bath & Beyond showed that even after the big sell-off in 2022, speculators were quick to go back to their old ways, as the stock was up by 122% since July 1 (despite any positive news), and then fell by 41% on Friday when it was revealed that billionaire Investor Ryan Cohen sold off his entire investment. 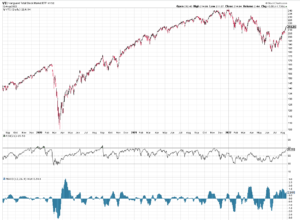 Investors are counting on the old bad news is good news mindset. A slowing, or declining economy, means interest rates don’t need to rise as much, and interest rates cuts would happen sooner than expected. Also earnings have not been as bad as feared.

But it is still too early to call the all clear. There have been plenty of times when markets have gone back to test the lows, or even break them. Inflation is not done yet, the economy just banked two successive quarters of declining growth, with no clear signs of an economic pickup. Cutting interest rates too soon would be out of the 1970s playbook, a strategy that didn’t work so well in fighting inflation.

US stocks increased by 2.8% for the week, putting in its best performance in a month.  The international markets were up by 3.1%, and bonds jumped by 1.09% as interest rates fell sharply. But stocks did not close the week well, on Friday, the S&P 500 fell by 0.9% on disappointing earnings by Snap, which dropped by 39%. Meta and Alphabet fell in sympathy, registering drops of 7.6% and 5.6%.

S&P 500 companies have beaten estimates by 3.6% according to FactSet, lower than the five-year average of 8.8%. About 20% of companies have reported. But there is a chance that earnings growth will actually be lower when all is said and done, after backing out energy profits.

Jobless claims continued their slow, but steady rise, with a 7,000 increase from last week to 251,000. The four-week average was up by 4,500 to 240,500. Continuing claims totaled 1.4 million and was up from 1.3 million the week prior. Guy Berger, the principal economist at LinkedIn said “It doesn’t look recessionary…but it’s definitely less good than it was before.”

The ECB raised rates by 50 basis points, bringing their key interest rate out of negative territory to zero. They also unveiled a plan to buy debt from the weaker countries.

The average gallon of gas was $4.84 on Friday, compared to $3.12 last year, but down from the June 14th peak of $5.02, according to OPIS, an energy-data and analytics provider. Despite high gas prices, travelers are hitting the road in record numbers this July 4th, according to the AAA. That is in line with the June momentum, with record rentals for Airbnb and strong hotel results.

But manufacturing demand is beginning to slow down, in response to high prices. Activity at US factories grew at the slowest pace in two years, according to the Institute for Supply Management’s purchasing managers index. The index was measured at 53, down from 54.9 in June. A number above 50 is considered expansionary, below contractionary. New orders were measured at 49.2 and declined for the first time in two years. The Employment index was 47.3 and fell for the second month in a row. In a bit of good news, the measure of prices paid fell to 78.5 from 82.2 in June. 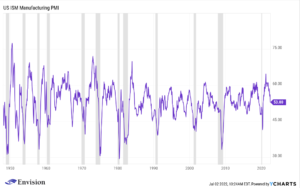 Auto sales were generally down around 15%, GM said nearly 100,000 vehicles in Q2 could not be delivered because they lacked computer chips.

The Atlanta Fed’s GDPNow is estimating Q2 growth at negative 2.1%.

Amidst the global shortage of oil, the Biden administration announced that it would allow up to 11 oil leases offshore, in the Gulf of Mexico and Alaska, while blocking leases in the Atlantic and the Pacific. Predictably, the proposed plan drew immediate condemnation from environmental groups for allowing any drilling at all and from oil advocates, that it didn’t go far enough.