Equities continued to ramp higher, up just over 2% in the US and around the world. Bonds managed a 0.18% advance. The dollar fell by 1.70% on comments by Treasury Secretary Mnuchin that a lower dollar would help US exports. The dollar is down 3.81% for the month.

The first official estimate for Q4 growth came in a 2.6%, significantly lower than the GDPNow estimate of 3.40% and the NowCast estimate of 3.88%. The estimate is subject to future revisions, but if it holds it stops the two-quarter plus 3% streak and keeps growth in-line with the pattern we saw under Obama.

This is in no way a prediction that this year will turn out like October of 1987, when the market crashed by 32%, but the consistent rise in the markets brings back some memories from the first few months of 1987. Here are some common themes as we read through past issues of Barron’s:

Discount brokerages like TD and Schwab reported a jump in new retail clients to close out 2017. Lisa Beilfuss writes in Saturday’s WSJ that the strong trading activity suggests “…the market rally is entering a “melt-up” stage that is bringing in once-skeptical investors.” (WSJ, 1/27/2018, Retail Investors Jump Into the Market)

The government shutdown ended late Monday when Congress passed a continuing resolution to keep the government funded through February 8.

Trump imposed tariffs and quotas on imports of solar panels and washing machines. The tariffs will impact China and South Korea. More US companies are now expected to seek protection. A case is likely to be brought to the World Trade Organization. If this is the start of the roll-out of the Trump protectionist agenda, slower economic growth, inflation and a hit to equity markets all now become heightened risks. Meanwhile, the rest of the world goes on in promoting free trade, 11 Pacific-rim countries agreed to form a trade bloc without the US. 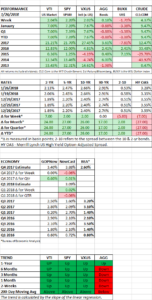 Interest rates were up across the board, that dropped bonds by 0.51%. The 10-year treasury bond has been ramping higher along with stocks, closing the week with a yield of 2.64%, the highest level since July of 2014. The 10-year 2-year yield curve has steepened by 7 basis points so far this month. Part of the jump in yields was due to faster economic growth in China. Chinese growth of 6.9% was the fastest in two years. The 10-Year Chinese bond yield went above 4% for the first time in four years. Faster growth in China should be positive for commodities. 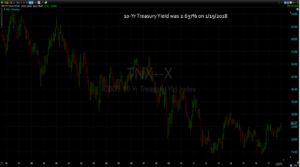 While equities have been rallying, the US dollar has been falling, it is off 1.71% year to date. That is a big drop. While investors here in the US are thrilled with the performance of the US stock market, investors in Europe aren’t. A European investor would be down about 3% over the last two weeks if they owned US stocks in euros, due to the lower dollar.

A group of moderate Senators were racing Sunday evening to avoid a shutdown of the government on Monday.  We didn’t know there were any moderate politicians left, but we hope they succeed. The fact that there was no agreement going into the weekend did not disturb the markets at all. That pretty much sums up the “market think” these days, simply oblivious to the mayhem in Washington and around the world and only concentrating on strong corporate profits and momentum in equities. 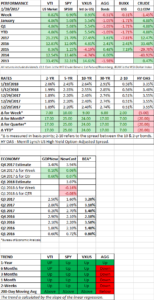 What many are describing as a “melt-up” continued on Wall Street, as US equities increased by 1.65%. The market is now up 4.14% after nine trading days and has advanced eight out of nine times. The one loss for the year was on Wednesday when stocks dropped a mighty 0.16%. International stocks were up 1.30% for the week and are up 4.58% for the year. The dollar declined by 1.06% and crude oil increased by 4.65%.

We had described a few times last year the market’s stairstep pattern of increases. Basically, stocks would consolidate and then advance, and repeat the pattern. Since mid-November, the stairsteps have been replaced by an accelerating angle higher.

Meanwhile, interest rates are increasing across the board. The two-year treasury closed the week yielding 1.99%, more than the yield on US stocks (about 1.80%). It was just recently that stocks were yielding more than the 10-year, now they yield less than the two-year.

Stock market bulls are banking on big earnings increases and a stable price/earnings (p/e) ratio. The earnings estimate for 2017 for the S&P 500 is $131.48 per Thomson Reuters I/B/E/S. For 2018, helped by tax cuts, earnings are estimated to come in at $150.15, an increase of 14.2%. 2019 estimates are for $166, an increase of 10.6%. These are optimistic numbers. The problem is that if interest rates continue to increase, there will be a gravitational pull for the p/e ratio to decline, which will offset to some degree the higher earnings. And then, of course, the higher earnings have to actually come through.

The Consumer Price Index rose by 0.1% in December. Core CPI was up 0.3%, the most since last January. Most of that increase was due to an increase in the cost of shelter. Year over year the index is up 2.1%.

Stocks burst out of the gate to start 2018 as US equities increased by 2.27% and international equities were up 3.24%. It was the best opening week since 2003. The Dow broke through the 25,000 mark. It took only 24 trading days from when the index cracked 24,000. Of course, moving a thousand Dow points is not what it used to be, at least in percentage terms, but remarkable nonetheless.

Synchronized economic growth around the world, lower US taxes, improving corporate earnings, low inflation, low-interest rates, and investor enthusiasm has created a powerful mix that pushes the market up and up despite valuations getting to historically high levels.

Noted investor and market historian Jeremy Grantham summed it up in his recent piece, “I recognize…that this is one of the highest-priced markets in U.S. history. On the other hand, as a historian of the great equity bubbles, I also recognize that we are currently showing signs of entering the blow-off or melt-up phase of this very long bull market.”

In other words, there might be a lot more to run in this bull market, but at some future point, valuations will begin to revert to their mean, or worse.

Looking at some technical indicators, the market is overbought. The Wilder’s Relative Strength Index takes a measurement of the speed and change of price movements over a period of time. A measure over 70 is considered overbought. A monthly chart of the S&P 500 and the Wilder’s Relative Strength Index over a period of 21 months, dating back to 1985, shows an overbought condition comparable to 1986-1987 and the late 1990s. Both periods were followed by bear markets. It is important to note that the oversold condition in the 1990s started about 5-years before the bear market of 2000. 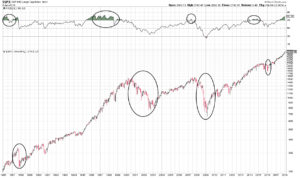 We are not anticipating a bear market in the very near term. Economic conditions in the US appear solid, earnings are increasing and there is worldwide growth. You can often find many indicators that will tell you why the market will crash tomorrow, but the market is overbought here from a technical perspective.

Nonfarm payrolls were up by 148,000 in December, lower than recent months. The unemployment rate remained the same at 4.1% and the average workweek also stayed the same at 34.5 hours. Average hourly earnings were up 2.5% year over year. Overall, tight conditions continue to prevail in the labor market. 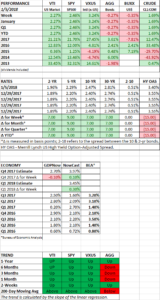