US equities were hit hard, falling by 3.53%. The S&P 500 was off by 3.83%. International stocks continued their recent relative out performance but still fell by 1.99%. US stocks are about 1.5% away from dropping through the low hit on October 29th. Equities will have to hold that level to put in the beginning of at least a consolidation process.

While yields on Treasury bonds were generally down a couple of basis points, the spread on high yield bonds continued to increase. The 10-year treasury yield is down by 10 basis points this month, but the high yield spread is up by 44 basis points. That indicates investors are backing away from debt most susceptible to a slowing economy. Bank loans and floating rate instruments have taken the brunt of the hit, a chart of the Invesco Senior Loan Portfolio (BKLN) is indicative of the damage.

The consensus is rapidly shifting that the Fed will have to back off its aggressive posture of three rate hikes in 2019. The futures market has priced in just one rate increase in 2019. That would be in addition to the projected December rate hike. It looks like projected GDP growth is slowing. Both the GDPNow and the NY Fed Nowcast model have Q4 growth at about 2.5%, down from 3.5% last quarter and 4.2% in Q2.

President Trump and Chinese leader Xi will meet in Buenos Aires this week. Trump said he very prepared for his meeting, “I know every ingredient, every stat. I know it better than everybody knows it. My gut is always right…China wants to make a deal. If we can make a deal, we will.” The Chinese currency (yuan) is hanging on by a thread, without a deal, the threat rises of the yuan falling through an important psychological barrier, resulting in possible contagion throughout global markets. The selloff in January of 2016 was driven in part by fears of a falling yuan.

US stocks fell by just under 1.5% for the week, while international equities continued their recent outperformance, down by just 0.06%. Treasury rates fell along the curve, but high yield spreads expanded. While the 10-year treasury dropped by 11 basis points, the high yield option-adjusted spread increased by 30 basis points, an indication that some fear is creeping into the credit markets.

Stocks were down the first three days of the week. On Thursday and Friday, the market rallied on hopes that the Fed will start to get the message that maybe they should take a more gradual approach to interest rate increases. Also, Trump said on Friday that China wanted a trade deal and that maybe an additional hike in tariffs is not needed.

The 2019 fiscal year for the Federal government got off to a terrible start in October (the first month) as the budget deficit widened to $100 billion in October. That is up from $63 billion the prior year. A massive increase that continues to be ignored but just about every politician in Washington. Federal outlays increased by 18% because of higher spending on Medicare, defense and interest. Receipts were up by 7%. The bad part is that unless this problem is dealt with, it is only getting worse from here due to increasing entitlement spending, more and more interest expense and lost revenue from the tax cuts. The idea behind the tax cuts is that greater growth would eventually lead to a net increase in revenues. That has yet to happen.

The Congressional budget office estimates the deficit will hit $1 trillion this year. 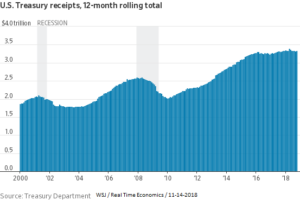 The conventional wisdom is that the Fed will continue to increase interest rates from here over the next year. But that might be wrong. While a December increase appears to be in the cards, the Fed can signal at the December meeting that it might consider a more gradual pace to future increases given economic weakness abroad and lower commodity prices. John Lonski, Chief Economist at Moody’s Capital Research, writes that industrial metals are down by 11% year over year, and that historically, such a drop in prices has often led to a lower 10-year treasury yield. If the Fed were to persist with increases at the same time that the 10-year yield is falling, that could lead to an inversion of the yield curve, a situation they might want to avoid.

There is a record amount of debt rated Baa, just above investment grade. As of Q3, there was a record high of $2.83 trillion, which exceeded the amount of single-A corporate credit. This is not usually the case, as shown below, prior to the recession in 2001 and 2008 single-A debt was greater than the amount of Baa’s. If the economy begins to falter, a good amount of the Baa’s might drop into high-yield (junk) status, that could increase interest rates in the high-yield market, leading to more problems as the weakest companies must deal with higher interest expense and refinancing issues. 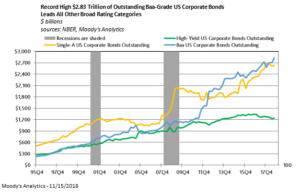 The global economy took a wrong turn as Japan and Germany reported GDP that contracted in Q3. Germany dropped by 0.8% and Japan was down by 1.2%. German economists said that temporary factors caused the drop. Japan blamed the fall on a typhoon and an earthquake.  Overall, the Eurozone managed a small increase of 0.7%, the lowest reading since 2013. In comparison, China was up by 6.5% and the US by 3.5%.

But all is not well in China. China reported slower consumer spending in October. Retail sales were up by 8.6%. That would be a monstrous gain in the US, but for China, that was the slowest increase in five months.

This video shows the top 10 countries as ranked by GDP from 1960 to 2017. It reflects the dynamism of the USA.

Stocks made it back to back winning weeks, helped by a post-election rally that pushed US equities up by 2.04% on Wednesday. For the week, the US advanced by 2.79% and international stocks were up by 3.88%. Bonds were down by 0.58%. The spread between the 2 and the 10-year treasury notes widened to 31 basis points as the 10-year moved up to 3.22%.

From a technical perspective (see the chart of the VTI below), in the fight to regain positive momentum, stocks broke above the 200-day moving average on Wednesday, and held above it on Thursday, but closed on Friday just below the 200-day average by the smallest of margins (11 cents). However, on a chart of the S&P 500, the closing price was slightly above its 200-day moving average. But in both cases, the rally stalled out right at the high of the October 15th (see the white line).

The elections turned out as predicted with the Democrats adding over 30 seats to take control of the House and the Republicans improved their numbers in the Senate. The market took a divided Congress as a positive sign for the markets on the theory that gridlock is good.

Right now the S&P 500 is selling at 15.7x estimated 2019 earnings, a reasonable valuation if those estimates can hold. Earnings for 2019 are expected to be $177.25 according to Thomson Reuters, up from $162.65 this year. That would be a solid increase of about 9%. But for the last month, the 2019 estimates have been falling week by week, and for the first time, the 2019 estimates are less than they were one-quarter (13-weeks) ago. They are only off by 0.74% during that period, but it is a trend worth watching. 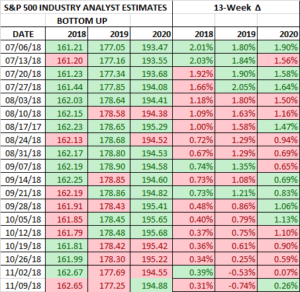 The Atlanta Fed’s GDPNow model is forecasting Q3 growth at 2.9%. The NY Fed’s Nowcast has growth at 2.69%. Those numbers would be roughly in line with Q4 of 2017 and down from Q2 and Q3. The composite reading of the Institute for Supply Management (ISM) came in at 60.3, down from 61.6. That is a very high reading and it was the first time in the history of the report, which dates back to 1997, that the reading was above 60 for two consecutive months.

Tariffs are a threat to the economy. A paper titled “Macroeconomic Consequences of Tariffs” and written by Davide Furceri, Swarnali Hannan, Jonathan Osry and Andrew Rose, released last month, reviewed the impact of tariffs from 1963 and 2014. The authors write “We find that tariff increases lead, in the medium term, to economically and statistically significant declines in domestic output and productivity. Tariff increases also result in more unemployment, higher inequality, and real exchange rate appreciation, but only small effects on the trade balance.” Let’s hope the President reads this paper.

Barry Ritzholz makes the case for buy and hold in this article.

Stocks closed out October and started November with a positive week, advancing by 2.8% in the US and 3.9% outside the US. Bonds fell by 0.6% as a solid payroll report increased the chances of higher interest rates down the road. Crude fell by 6.6%.

While stocks had a good week, the technical damage has yet to be undone. The charts still show a series of lower lows and lower highs (see 1-2-3-4-5), the market could not break through the 200-day moving average (the yellow line), and what was looking like a promising Friday with the market up by 0.76% in the morning turned into a 0.41% loss for the day. Although stocks did show resilience not breaking through the Thursday lows.

There was a hint of good news on the trade front, Trump tweeted that he had a “very good conversation” with Chinese President Xi Jinping on settling the trade dispute. It was also reported that Trump had his staff working on drafting an agreement for the G20 Summit in a few weeks. An agreement would take away a headwind facing the world economy.

Private sector paychecks were up by 3.1% compared to one year earlier. It was the biggest year over year gain since 2008. Nonfarm payrolls skyrocketed by 250,000 in October. Unemployment remained at 3.7%, the lowest number since December of 1969. The labor force increased by 711,000 people of which 600,000 found employment.

According to Yardeni Research, the stock market has been up for the one year after every midterm election since the 1950s. The gains have ranged from 1.1% after 1986 to 33.2% after the 1954 elections. Moreover, a Republican President combined with a split Congress, the favored outcome for this week’s election, has produced an average annual return of 15.7% for the S&P 500 during that time period. Of course, these are not huge sample sizes and “past performance does not guarantee future results.”