No update this week but below is the scoreboard. Contact us with any questions.

Stocks advanced by 0.63% in the US and by 0.92% overseas. International stocks have been outperforming since mid-August. The graph below charts the ratio of US stocks (VTI) to stocks outside the US (VXUS) and the declining black line shows the outperformance of the international stocks.

The market is expecting another Fed Rate cut at the end of the month, and that is providing support to equities. The Fed also has started to increase the size of its balance sheet, buying $60 billion a month of treasury bills, although they are not calling it quantitative easing. The Fed is buying the bonds to ensure that there is enough money around so that the gears of the banking system can move in sync without crashing, as came close to happening last month in the repo market.

US stocks were up this week by 0.60% and international stocks had a big week, +1.96%. Stocks managed the advance on optimism of a breakthrough on the trade front with China. On Friday, it was announced that China would buy more US farm products and the US would hold off on further tariffs. The agreement was characterized as “phase one.” There was even a hint of some progress with Brexit. US stocks are now only 2% off the all-time high. Bonds dropped by 1% on higher interest rates and the 3-month/10-year curve went back to normal status (not inverted).

Job openings were 4% lower than one year ago, the third straight monthly decline. That hasn’t happened since 2009. However, August’s job postings overall still were greater than the number of unemployed by about 1 million. 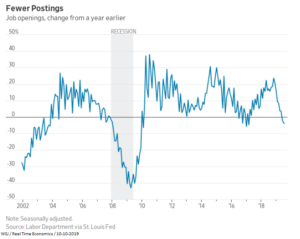 Two top World Bank officials warned that “the global economy is now in a synchronized slowdown,” those were the words of Kristalina Georgieva of Bulgaria, the no. 2 official at the World Bank. David Malpass, who is the World Bank’s President, referring to their June forecast of 2.6% global growth in 2019, said: “We now expect growth to be even weaker than that, hurt by Brexit, Europe’s recession and trade uncertainty.” International Monetary Fund research shows that the cumulative economic loss from the trade war could amount to $700 billion by 2020. That would represent about 0.8% of global gross domestic product.

Stocks fell early in the week as disappointing PMI reports raised recession fears but rallied on Thursday and Friday on decent jobs numbers. Investors are expecting another Fed rate cut later in the month. Interest rates dropped sharply on the greater likelihood of a recession.

The Institute for Supply Management Purchasing Managers Index for manufacturing came in at a bleak level of 47.8 for September, down from 49.1 in August. It was the lowest level since June of 2009.  The trade war has been a drag on the PMI. “Global trade remains the most significant issue, as demonstrated by the contraction in new export orders that began in July 2019,” said Timothy Fiore, chair of the Institute for Supply Management.

A reading of less than 50 is considered contractionary. For the most part, past recessions have been preceded by a falling PMI that is less than 50, but there have also been false signals, including December of 2015 when the PMI hit 48 and August of 2016 when it hit 49.4. 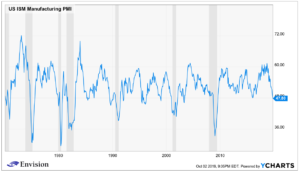 Manufacturing only represents 8.5% of total employment and 11% of GDP. But a slow-down in the manufacturing sector can find a way to seep into the overall US economy. There was a sign that is happening as the non-manufacturing PMI fell sharply to 52.6 from 56.1.

The decent jobs report shows that the economy is still hanging in there. The unemployment level fell to 3.5%, the lowest since December of 1969. Nonfarm payrolls increased by 135,000. That was less than the consensus estimate of 150,000, but the previous two months were revised up by 45,000. Wage growth month over month was flat, below expectations, year over years wages are up by 2.9%.

The impeachment process rolled on as the embarrassing political situation remains a complete mess and the chances, while still very early, seem to be increasing that the winner in 2020 will represent the extremes of their respective parties (Trump or Warren). Neither choice is encouraging.