Friday turned into a dramatic day. Whether it turns out to be a marker for the end of this correction time will tell. The futures opened higher but when the 8:30 unemployment report came out the market plunged. The report was a huge disappointment and included lower revised numbers for July and August also. The market was down 2.2% at one point. But then it all turned around and the market just kept rising. The SPY closed up 1.49% on the day at an even 195. The SPY now sits on a resistance line that has marked about 12 other high, low or closes in the last 28 days.

The market has had the chance to move lower on each of the first three days in October, but has now closed at or very close to the high on all three occasions. Another positive is that the market normally performs well in the final quarter of the year. We will see if there is any carry through this week.

All of the equity indexes were down for the quarter. Emerging markets were hit hardest, down almost 18%, followed by international markets. The SP500 fell 6.44% for the quarter and the overall US markets as measured by the VTI were down 7.28%. The aggregate bond index, which is mostly composed of treasuries, managed a 1.34% advance. All of these numbers include dividends.

At the beginning of the quarter the fear was of a Greek default and the uncertainty of a Fed rate increase. After lots of drama, the Europeans managed another deal to kick the can down the road. That settled the markets and allowed for a July advance. But uncertainty about a Fed rate increase, a slowing China, and falling commodity prices doomed the market in August and September.

The Fed still has not raised interest rates, and they might have missed their window. Zero rates should be for an economy in a real crisis mode, as we were back in 2008 and 2009. We have long ago left that era. And while growth has never been gangbusters, it has been slow and steady, and there were numerous opportunities along the way to begin a very slow and gradual liftoff of rates. If the economy were to show signs of slowing, the Fed could simply halt the increases. The problem with artificially low rates is that it encourages activity that would not be optimal had money been priced at market rates. This hurts the economy over time. The other problem is that uncertainty as to the timing of rate increases has caused lots of damage to the market as investors have become ridiculously focused on if, when and how much. As has become the norm for this Fed, they kept to the same script and did not raise rates in September.  The market reaction was not positive. The SPY was up above 200 to the upside in anticipation of an increase, but when the announcement came we closed just below 200 and then the market fell 5.8% to 188.12 over the next couple of weeks. Either the Fed was being too cautious like it often is, or they have greater insight into a slowing economy.

China was cited in the Fed’s statement. And a hard economic landing in China, due to a contracting manufacturing sector has spooked world markets. A slow China led to tumbling commodity prices which devastated emerging markets (see the VWO above) around the world.  China’s direct impact on the US economy is not that big, an estimated 1% or so of the US GDP. But if China’s slowdown hurts the rest of the world that can eventually will hurt the US.

Another negative signal is the rising spread between high-yield and treasuries. A rising spread might indicate the threat of recession. 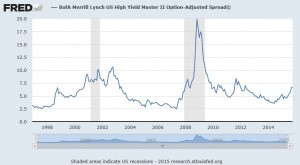 While corrections are frightening they are part of normal market behavior. Bigger market declines, called bear markets, defined as a drop of 20% or more, also happen but less so. They are generally associated with recessions. So a lot of the threat of a potential bear market has to do with if a recession is on the way here in the United States. So far that risk is appears low, the US economy seems to be moving slowly forward as it has been (note – employment numbers released on October 2 indicated a slowing economy). Globally, there is a greater threat of a recession due to China.

Another key factor is the valuation of the market. Is the market overvalued, fairly valued, or undervalued? Surprise! There is no clear answer to that. There are valuation models that can put you in either of the three camps.

An analysis of the CAPE ratio argues that this market is still overvalued. The CAPE ratio is the cyclically adjusted price-earnings ratio. It is a 10-year earnings average of the SP500 adjusted for inflation. The ratio is at about 25 and the historic average is about 17. A market fall of 30% would get us to average. However, it can take years for the market to adjust and this has not been a reliable indicator recently. The ratio understands ‘true’ average earnings during an expansion, says Minnesota State University Professor Stephen Wilcox. Changes in accounting methods and taxes over time make it difficult to compare different time periods. The market has been overvalued based on the CAPE ratio for a long time. 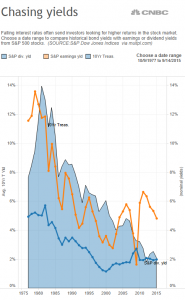 For Q3, in terms of equity sectors, the REITs as measured by the VNQ managed a 2.14% advance. The VNQ fell 10.52% in the prior quarter but as the threat of interest rate increases seemed to decline the sector posted a slight rebound, not to mention that real estate in the US continues to do well. Energy (XLE) and materials (XLB) got obliterated, falling 17.92% and 16.95%. For the year, there is a trio of double digit losers, energy is down 21.02%, materials is down 16.56% and industrials (XLI) fell 10.45%. The only sector that is up is consumer discretionary which increased by 3.98%.