It was a week for the record books as the Dow shot through the 20,000 barrier on Wednesday and closed at 20,094. Boeing jumped by 5.1% on strong earnings and that was enough to push the Dow through.

Overall, US equity markets were up about 1%, international +1.37%, bonds and the dollar were roughly flat and crude advanced by 1.43%

Surprisingly, the market has ignored what would seem like negative news. In the just the first week of the Trump presidency, he has gotten into a war of words with Mexico that might turn into a trade battle/war, there is talk of a 20% border tax/tariff, barred citizens from certain Muslim-majority countries from entering the country and dropped out of the Trans-Pacific Partnership, and those are just the headlines. But the market is staying focused on anticipated stronger growth ahead. 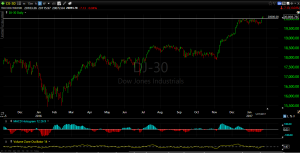 The first estimate from the Commerce Department on real GDP was +1.9% in Q4. Trump is looking to double the 1.9% rate. The 1.9% estimate is much lower than the GDPNow forecast of 2.90% but in line with the NY Fed’s Nowcast estimate of 2.10%.

For all of 2016, GDP was up 1.6%, that is the lowest number since 2011 and down from 2.6% in 2015. Q4 was highlighted by strong consumer spending, an increase in business investment, home construction and government spending. Net exports subtracted 1.7% from the growth rate. 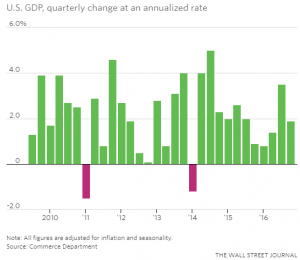 The labor market remains tight. Jobless claims came in at 259k. The four-week average was $245.5k, the lowest number since November of 1973.

Below are the performance stats for the week ending 1/20/2017. Look for our quarterly webinar , which will cover a lot of topics, in the next week. 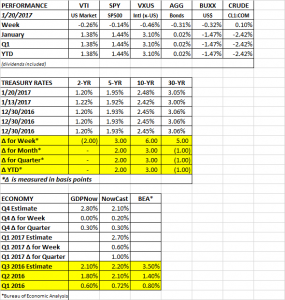 US markets were pretty much flat for the week. The more Trump speaks, the more his post-election market friendly messages get muddled, slowing market momentum. International markets outperformed the US for second straight week. Interest rates were down just slightly, helping bonds rise. The USD fell by 1.02% and oil dropped by 3%. 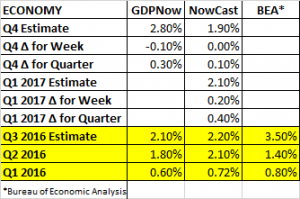 Q4 earnings should be up year over year. At the end of the year, Q4 earnings were projected to increase by 3.0%. But normally, actual earnings come in higher than the quarter end projection. That would make it two straight quarters of improving earnings. 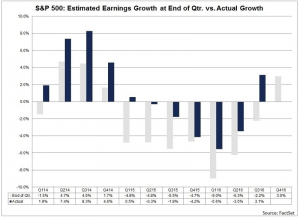 The main focus was on the Dow as it made another push to break through 20,000. Of course, 20,000 is just a number and has no real economic meaning, but it serves as a milestone that makes news. And to traders, the number must have significance because they have been selling every time the Dow gets close. The Dow came within 0.37 of the mark on Friday, about as close as you can get without breaking through.

There is, however, a negative divergence between the technical indicators (see the pink declining trend lines towards the bottom of the chart below) and the higher prices of the Dow. This indicates a slowing of momentum and sometimes leads to a pullback. 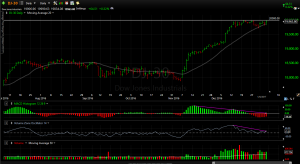 December payrolls increased by 156k. The unemployment rate increased by a tenth to 4.7% mainly due to an increase in labor force participation. Average hourly earnings reached a new cyclical high. Fed committee members will consider this as confirmation that the economy has reached full employment and that the Fed is on track for more interest rate increases.  Expect further earnings increases due to the combination of a tight labor market and minimum wage increases in 20 states beginning in January.

We consider a trade war the greatest economic threat to this bull market. When Trump was first elected, the conventional wisdom was that he would concentrate on pro-growth policies like rolling back overbearing regulations, repatriation and corporate tax reform. It was also thought he would soft-pedal on trade, and avoid a dangerous trade war. That is what set off this market rally. But the closer we get to inauguration, the more Trump tweets, and the more he makes executive appointments, the greater the threat of a real trade war. Hopefully most of this is just posture for negotiation. And Trump has plenty of smart advisers that do understand the trade war threat, but this is something to watch closely.