US stocks dropped by 1.14% and international stocks were down by 1.23%. An impeachment inquiry began on Trump, the repo market needed more help, and Germany seems close to a recession, add on to that a word that the US might delist Chinese companies from US markets, and it was enough to push stocks lower for the week.

House Speaker Nancy Pelosi began an impeachment inquiry of Trump after a whistle-blower complaint that the President withheld military aid to Ukraine in order to pressure them to investigate Joe Biden and his son.

The Repo market was in need of continued help this week. The Fed injected $50 billion on Monday and then doubled that by midweek. The problems most likely stem from the draining of reserves from the system.

The German IHSMarkit composite output index entered contractionary territory for the first time since April of 2013. The rate of decline was the steepest in seven years. Growth in the service sector slowed sharply. For the manufacturing index, it was the eighth straight decline in output.

Phil Smith, Principal Economist at IHS Markit said: “Another month, another set of gloomy PMI figures for Germany, this time showing the headline Composite Output Index at its lowest since October 2012 and firmly in contraction territory. “The economy is limping towards the final quarter of the year and, on its current trajectory, might not see any growth before the end of 2019. “The manufacturing numbers are simply awful. All the uncertainty around trade wars, the outlook for the car industry and Brexit are paralyzing order books, with September seeing the worst performance from the sector since the depths of the financial crisis in 2009. With job creation across Germany stalling, the domestic-oriented service sector has lost one of its main pillars of growth. A first fall in services new business for over four-and-a-half years provides evidence that demand across Germany is already starting to deteriorate.”

We Work pulled its IPO last week after it was apparent that the public markets would not value the Company at any level close to its recent private valuations. Adam Neumann, We’s dynamic founder, subsequently stepped down after pressure from its lead investors.

Peloton didn’t have to pull back its IPO, but its offering did not go as expected, dropping 10% on its first day. Further evidence that the public markets are taking a more rational approach to valuation, and that artificially low-interest rates and easy money have given many start-ups and their private investors a sense that positive cash flow simply doesn’t matter, but ultimately, it does, at least recently.

Stocks were up for the third straight week as recession fears faded slightly and the chances for a trade deal supposedly improved. How many times have we heard that before? Trump delayed tariffs on some items and China did the same on pork and soybeans. The S&P 500 increased by 1%.

A strong consumer spending report for August showed that the threat of a looming recession might be overstated. Retail sales were up by 0.4% which was better than expected. Yields exploded higher, the 10-year increased to 1.901% on Thursday, up by 34 basis points, the biggest rise since June of 2013. The gap between the 3-month treasury bill and the 10-year bond significantly narrowed and is now inverted by only by .061 percentage point compared to 0.41% one week ago.

There was a shift in factor sentiment, as investors jumped into value and out of momentum. MTUM, the IShares Momentum Factor ETF fell by 2.35% while VLUE, the IShares Value Factor ETF increased by 4.02%.

If you are wondering how the economy can maintain its pace of slow growth in the face of an ever-increasing trade war, one reason would be the fiscal stimulus provided by a budget deficit that now exceeds $1 trillion dollars for the first 11-months of the year (4.4% of GDP). That is the first time the deficit has exceeded $1 trillion since 2012. It is possible that a surplus in September pulls the number lower, but the point is the deficit is exploding at a time when it should be declining.

Closing out his tenure as the ECB president, Mario Draghi announced a rate cut and the restart of quantitative easing.

No scoreboard this week due to a software issue. It will be posted next week as normal. Sorry!

The market broke through recent resistance and is only 1.77% off of the all-time high set on July 26th. Stocks certainly didn’t rally on economic news. Manufacturing in the US is now contracting (see ISM below), the jobs report was tepid at best, and Q3 growth estimates are at about 1.5% for both the Atlanta Fed’s GDPNow model and the NY Fed Nowcast, all indicating a slowing economy.

Apparently news that the US and China would meet in October was enough for the market to move higher.

While the rate of growth in the US slows, $17 trillion in negative-yielding debt around the world is creating a wave of support for equities.

The US added 130,000 jobs in August, and that included 25,000 census workers The amount of jobs being added has been falling the last few months. A bright spot, average hourly earnings were up by 3.2% and has now been over 3% for more than a year. The unemployment rate was unchanged at 3.7%.

The Institute for Supply Management’s manufacturing index fell to below 50 for the first time since August of 2016. The reading came in at 49.1, below 50 is considered contractionary. Trade was cited as the biggest concern by executives.

Manufacturing only accounts for 11% of US output. So a weak reading does not necessarily measure the entire US economy. The overall job market continues to be solid and recent consumer spending numbers were strong. But this is a piece in the puzzle. In the past, when the ISM fell below 50, it has preceded a recession (shaded areas below) some of the time (see red arrows below) but not all of the time. 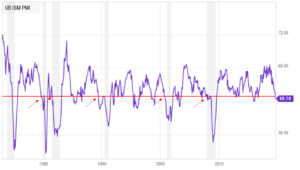 According to a new research report from economists at the Federal Reserve, the uncertainty created by trade policy has cut about 0.8% from US and global economic output in the first half of 2019. That number will increase to greater than 1% due to more recent developments.

US stocks rallied during the week advancing by 2.57% while international stocks followed with a 2.24% advance. Bonds were up by 0.31% as rates fell slightly.

Personal-consumption expenditures increased by a seasonally adjusted 0.6% in July, an indication that US households remain strong. Jack Kleinhenz, the chief economist at the National Retail Federation, said: “As long as we see a strong job market…the direction of the economy continues to be on track: positive but slowing.” Low gas prices have buoyed the spirits of consumers. A gallon of regular gasoline is down $0.30 from one year ago according to the price-tracking firm Gas-Buddy. The low prices are providing a tailwind to the economy, helping offset some of the negative impacts of the trade war.

FOREIGN INVESTMENT FLOWING INTO THE US

The barrage of negative yields around the world is one factor that has been helping support US markets. There is now $17 trillion in negative-yielding debt around the world. 10-year German Bunds have a -0.7% yield, while Italy, which has a barely functioning government, yields less than 1%. Thus, US debt, yielding around 1.5% or so, is attracting an avalanche of overseas investors. Foreigners bought $64 billion of US stocks and bonds in June, the largest amount since August of 2018, according to Treasury Department data. This has lowered yields on debt and kept equities close to their highs, despite a more threatening economic outlook.

ANOTHER ROUND STARTS TODAY

The newest round of tariffs kicks in today on about $110 billion in Chinese goods. This will be a 15% tariff that hits consumer products like footwear, apparel, home textiles, and some technology products like the Apple Watch. Another round that will impact $160 billion in goods is scheduled for December 15.

Not to be outdone, China rolled out their own tariffs today on about $75 billion of US goods, impacting factories and farms across the Midwest and the South.

In an August report, the non-partisan Congressional Budget Office estimated that by 2020, the tariffs/trade war will lower US GDP by 0.3% and reduce the average real household income by $580. JP Morgan wrote that the cost to the average US household will be $1,000 per year.

The purchasing managers’ index reports from around the world will be released later this week. That will give a hint as to the direction of the world economy and what the impact of the trade war has been and likely to be.