Jonathan Laing writes about the proposed Fannie/Freddie takeover proposed by Bruce Berkowitz and friends. The group owns sizable positions in the preferred stock of both entities. The only problem is that the companies were destined for complete bankruptcy and the US government sunk in $187 billion to save them. So the common and the preferred should have been wiped out, but the preferred remained trading, and now that F/F are both making money again, Berkowitz wants to either take them over or get the preferred back to par for huge gains. Laing writes “In the long history of bailout deals, no heist of the U.S. taxpayer would approach this one in cynicism and chutzpah.

How to profit from today’s shareholder activisim – Darden, priced at $53.33 but activists think it is worth $76. Group led by Barrington Capital wants to split into two companies.

Gundlach and Shiller have started the DoubleLine Shiller Enhanced CAPE (DSEEX) fund. Fund will invest in low CAPE (cyclically adjusted PE ratio) sectors. CAPE is currently at 25, normally 16. At 28 stocks would be unattractive. Priced for 2.5% real return now. Gundlach said that 10-year Treasuries might take out last year’s low of 1.4% based on a recession or an international problem. Also said the non-guaranteed mortgage market is the cheapest sector in the bond market. Can make 6 to 7% annual return. You can make money investing in areas that people do not want. People don’t want interest rate risk so if you go to the long end of the curve you can get 11% in the agency mortgage market. Dollar denominated emerging market debt you can 6-7% and no currency risk.

American Realty Capital Partners (ARCP) trades at a discount to peers O and NNN. After merger with COLE will have 47% investment grade tenants, 99% occupancy and average lease term of 11 years. Sells at 11x 2014 estimated AFFO. Dividend yield next year is expected to be 7.6%. Can also play the merger through COLE shares, $14.31. COLE s/h will receive1.0929 ARCP shares for each share of COLE. Risk is deal falls through.

We wrote about RIG on 10/21/13 when it closed at $46.57. It went on a big run right after that and was helped on Monday when it was announced that the company had agreed to some of Carl Icahn’s ideas, which has moved the stock to a closing price of $55.14 today. The proposals include (1) creating an MLP with some of the rigs, (2) shrinking the board, and (3) a $3 dividend.

The market opened on a high note due to a European interest rate cut, and pushed up against the October 30th high and then promptly fell, hard, to close at the low of the day, down 1.32%. The market supposedly fell because a GDP report came in better than expected, that would be good news except to the stock market which has an unusual way of thinking about things. A good economy means that tapering would happen sooner rather than later, and so that is bad news for the market. All of this gets back to the artificial inflating of investment assets due to the Fed’s printing press and as we have written before, the sooner we can end this the better for everyone. We believe a slow, steady taper over a 12-month period would work just fine and had it started back in September when everyone expected it, it would have prevented any big market hits. But because the Fed did not begin to taper, we will now have to deal with days like today.

The market has been pushing up against highs of late but if you look at some of the high-flyers many have been starting to show broken chart patterns in the last couple of weeks.

Take a look at TSLA, after hitting $194 on September 30th, it has shown a string of lower highs and lower lows. 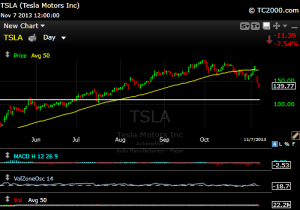 Today the market opened above the high from yesterday and finished lower than the low of the last 9 days. Volume was the highest since October 16. Not really a good technical signal. This market has continuously shrugged off days like this, time will tell if this is the start of something bigger.

Ideas in this week’s Barrons:

Nelson Peltz (Trian) – MDLZ – activist play, could double earnings by 2015
Marc Lasry (Avenue Capital) – JCP bonds trading at .65 on the dollar, should return to par in two years.
Mark Kingdon (Kingdon Capital) – BA – increased cash flow due to 787 should get stock to $170.
Steve Kuhn (Pine River) – ACAS – a BDC, buying back shares at a big discount to book. Dividends to resume in the future. Stock could double in a few years.

Donald Yacktman likes KO, PEP and PG. They are “like undervalued bonds.”