Stocks were basically flat in the US and down 0.55% outside the US. The action has been in small stocks, which are at a record and are up by 25% since November 5.

After months of negotiation and congressional approval, Trump suddenly decided he didn’t like the stimulus bill, but the market wasn’t disappointed, figuring congress will now come back with an even bigger package. Trump wants $2,000 in direct payments instead of $600. In a world where debt doesn’t seem to matter, why not (according to Trump)?

Household spending fell in November for the first time in seven months, down 0.4%, more evidence that the virus is taking its toll. Household income dropped by 1.1%, the third decline in four months. Consumer confidence is falling, down by 4.3 points, according to the Conference Board. However, income is up 2% since February, and savings rates are at historically high levels. So whenever the virus gets under control, there is the possibility of pent-up demand will increase economic activity. The Atlanta Fed’s GDPNow model is projecting Q4 growth at an annualized rate of 10.4%.

After four years the finishing touches are being put on a Brexit deal that would govern trade, totaling almost $900 billion, between Britain and the EU. The deal, for the most part, would allow tariff-free trade between the two sides and reduce paperwork at the border. It would also allow Britain to sign free trade deals with other nations.

US stocks were up by 1.02% and international stocks by 1.23%. As the market continues marching higher, signs of excessive optimism are all around. A recent Bank of America survey of professional money managers are underweight cash for the first time since May of 2013, holding only 4%. Individual investors are piling into speculative stocks with outsized best on call options. Bitcoin has broken out to new highs, now over $20,000. Value Line, a long-time investment research firm, calculates an 18-month target price range for the companies that it follows, the projection for the average stock is now 4%, the lowest number ever. At one point this year, when stocks were at their low, it was 72%. Speculation is running high in the IPO market. In this week’s Barron’s 2021 Outlook article, experts say stocks will gain 10% next year. More government stimulus and a faster-growing economy will provide the fuel for higher equity prices. The consensus is for the fastest economic growth in the US since 1984, +5%, and S&P earnings of about $170.

At a news conference this week, Fed Chair Jerome Powell did say that price/earnings ratios were on the high side but said that the equity risk premium was reasonable given low Treasury yields. Right now, the forward p/e based on 2021 earnings would be the highest p/e ratio since at least 2004 (see below). The problem is what happens when yields begin to rise. That may be a long way off, or maybe not, if the vaccine puts an end to the crisis and consumer spending explodes, setting off inflation, forcing rates higher, which would require a reset to lower p/e ratios. 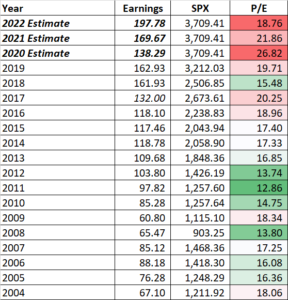 Growth on the virus stalled out for a couple of weeks pre-Thanksgiving, but as the experts predicted, the holiday put in motion another huge surge in cases. The Pfizer vaccine began its initial rollout this week, and the Moderna vaccine was approved on Friday. So, as the vaccines slowly rollout, the economy is getting closer to a return to something close to normal. 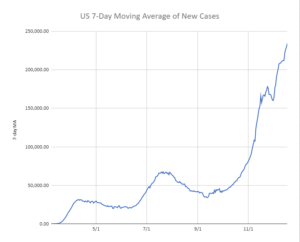 The surging virus is cutting into economic activity. Retail sales were down by a seasonally adjusted 1.1% in November from October, and October was revised down from +0.3% to -0.1%. Restaurants, department stores, and car dealerships were all down while groceries and building materials were higher. First-time unemployment claims were 885,000 last week, the highest level since September.

The electoral college declared Joe Biden the next president of the United States. Trump’s lawsuits challenging the election were all dismal failures. Congress still has not agreed on a relief plan, the two sticking points are aid to state and local governments, and business liability protection.

A recent ruling in a US District Court is sending shivers through the leveraged buyout industry. Judge Jed S. Rakoff ruled that creditors of retailer Nine West can file a lawsuit for $2 billion in damages against the company’s board of directors. The ruling stated that the board acted “recklessly by failing to adequately assess an LBO-buyers post-transaction solvency.” Brian Quinn, a corporate law professor at Boston College says “It could be a game stopper for the private equity business.” Basically, the Board sold off important Nine West brands leaving the remaining entity as a much weaker unit, with too much debt, which led to bankruptcy. Because of that, they are now liable. The ruling can be overturned on appeal, but for now, this can impact private equity going forward.

Stocks were down by 0.69% in the US and 0.42% outside the US. Stimulus talks, which are on a constant stop and go, were in stop mode most of the week so that hurt stocks. Plus, the virus has been ramping up significantly since Thanksgiving and that is raising concerns of more restrictions on economic activity. As an example, indoor dining in New York was halted.

Despite the slight decline in the overall US market, the IPO’s were flying high, bringING back memories of 1999. DoorDash was up 86% and Airbnb 113% on their first day of trading.

Another sign signaling overvaluation, US investment-grade corporate bonds now yield less expected inflation. As of last Friday, the expected inflation rate over the next decade was measured at 1.89% (the difference between nominal and inflation-adjusted yields on 10-year US bonds), greater than the 1.85% yield on investment-grade corporates. This is the first time that has happened and it is mainly driven by negative real yields on US Treasury’s pushing investors up the risk scale, such as into these bonds, thereby pushing their yields down.

The European Central Bank ramped up its bond-buying program by more than a third and will introduce new low-cost loans for banks, in an effort to help governments and businesses as they fight through the current tidal wave of the virus. With this effort, the ECB has now poured in $3.62 trillion into the eurozone economy.

Unemployment claims jumped significantly higher, up by 137,000 to 853,000, last week. Consumer spending was up in October for the sixth straight month, according to the Commerce Department. And the Institue for Supply Management reported that the manufacturing and services sectors expanded in November.

The government reported a record deficit for the first two months of the fiscal year, up 25% from last year to $429 billion. Federal spending was up by 9% while revenue was down by 3%.

Net worth of U.S. households hit a record, a Federal Reserve report showed. Most of the benefit has gone to wealthier Americans who are invested in equities.

Stocks advanced again last week, with US markets up by 1.77% followed by international markets at 1.48%. For November, stocks rallied 16.59%. It was the best November since 1928. Bonds declined by 0.57% for the week as the yield on the 10-year Treasury rose by 13 basis points.

But the anticipated slow-down in the labor market that we have written about in the last couple of months appears to be here. Non-farm payrolls were up by only 245,000 in November, down from 610,000 jobs in October. The unemployment rate did fall to 6.7%, but that was due to 400,000 people leaving the workforce. The weak report might spur Washington to move quicker on a stimulus plan. The latest proposal centers on a $900 billion stimulus package.

22 million jobs were lost at the beginning of the pandemic, and the US has regained 12 million of those. Government payrolls were down by 100,000 while hiring was up in transportation and warehousing, reflecting e-commerce, which has been the big beneficiary of the virus.

Over the last decade, equity taken out of the stock market, mainly via stock buybacks and takeovers, outpaced equities issues, via initial and secondary stock offerings, by a 3 to 1 ratio. But this year, the numbers have evened out. That makes the stock rally this year even more impressive, as stocks are up 18.65% without that tailwind. But it might be giving a message on valuation, with companies selling stock into the market to “sell high” and holding back on buybacks given high prices and valuations.