We published our 2020 Review and Outlook today. Hear about:

You can watch the video at this link (it is only 15-minutes):
https://youtu.be/T5AYAkpb71k

US stocks were up by 2% and international stocks advanced by 1.40%, bonds were mostly flat. The US and China signed the phase-one trade deal. China will spend $200 billion to help close the trade imbalance, China will avoid currency manipulation and will do more to minimize theft of American technology. The agreement does not address the Chinese state-backed hacking of US companies and government institutions, it does not address state subsidies of Chinese companies. The US says those issues will be addressed in subsequent agreements.

The US will maintain tariffs on the majority of imports from China until further reforms are agreed to. Ultimately, “this deal will work if China wants it to work,” according to US Trade Representative Robert Lighthizer.

In the meantime, the deal lowers trade tensions and hopefully will lead to further successful negotiations between the two countries.

Iran retaliated for the killing of Iranian general Qassem Soleimani by firing several missiles that resulted in no deaths, and some minor property damage. The market viewed that as a plus, as it appeared that Iran was “standing down”, in the President’s words, and there would be no further escalation, at least for now. That bit of good news was enough ammunition to move the markets up by 0.7% for the week.

We have written in recent weeks that valuation measures have been getting expensive. That was brought up several times this week in the media and is discussed in today’s Barron’s. The chart below from Charles Schwab shows that by most measures, stocks are expensive. 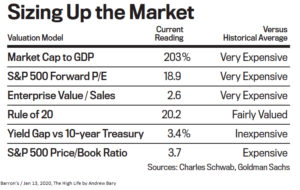 However, there are a couple of measures in the bulls’ corner. The Rule of 20 states that if the sum of the p/e ratio and inflation is equal to 20, stocks are fairly valued. Less than 20 is undervalued and greater than 20 is overvalued. With a forward p/e of about 19 and inflation at about 2%, the market would be about at fair value. When looking at the earnings yield (earnings/price) of 5.29%, less the yield on the 10-year treasury of 1.83%, the difference of 3.46 indicates an undervalued market.

So of the six valuation measures shown, three are very expensive, one is expensive, one is fairly valued and one is inexpensive. We lean to the expensive side. But given the technical strength of the market both in the US and overseas, the rally can certainly continue.

The Bureau of Labor Statistics reports that 145,000 jobs were created in December, less than the projection of 160,000. The two previous months were revised down by 14,000.  While less than consensus and less than last month, employment increases of around 150,000 or so indicate solid growth. The disappointing number was wage growth, which was up by only 1%. That was the lowest number since Q4 of 2017 and among the weakest in the last five years. However, net-net, this is still a decent report.

For the week overall, stocks lost a little bit of ground, down 0.09% in the US and 0.50% x-US. The market got off to a good start on Thursday, the first trading day of the year, setting a new high and up 0.83%. But on Friday stocks closed down by 0.64%, on news that a US drone killed a top Iranian general, Qassem Soleimani. It was reported that Soleimani was planning further attacks on US forces.

In other news, the US and China are set to sign the phase-one trade deal on January 15th and to begin talks on phase-two shortly thereafter. The ISM manufacturing index fell to 47.2 in December from 48.1 in November. It was the fifth consecutive decline. 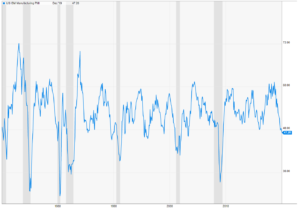 The Fed has increased its assets by $410 billion since late August. That is about when the market went on its run to close out the year, the S&P500 was up by 12.75% during that period.

There seems to be a lot of complacency in the market, there is almost no fear. The CNN Fear & Greed Index was up to 97 out of a possible 100 on Thursday but closed at 93 on Friday, still in the Extreme Greed category, but valuations, at least by one measure, are very high.

Robert Shiller, Nobel Prize winner and developer of the Cyclically Adjusted Price Earnings (CAPE) ratio wrote in the New York Times on Thursday, that the CAPE ratio currently stands at 31, just short of the recent high in January of 2018. Only two times in history has the ratio been higher, 1929, just before an 85% crash, and in 1999, before a 50% drop. Shiller attributes today’s high values to a “trust your gut” kind of mentality, versus an evaluation based on science and math. Shiller writes, “We have a stock market today that is less sensible and orderly than usual, because of the disconnect between dreams and expertise.”