As if the $1.9 trillion stimulus, coming on top a few trillion prior was not enough, Biden is putting the finishing touches on his next proposal, a $3 trillion infrastructure package. So the spending of the monopoly money looks like it is set to continue without a care. Don’t worry, Biden figures he will pay for all of this with higher taxes.

Consumer spending was down 1% in February, mainly due to the cold weather, according to economists. Household income, without the benefit of Federal giveaways, was down by 7.1%. But economic activity is expected to jump higher over the next few weeks and months. Visits to restaurants and hotels are up, and airline activity continues to increase. Inflation remained under control in February. The price index for personal consumption expenditures was up by 1.6% year over year. That was up from 1.4% in January and was the largest increase since February of 2020, but still shy of the 2.0% target. The Fed expects inflation to reach 2.4% by the end of 2021 and then drop back to the 2% target.

Stocks were off by 1.03% in the US and were higher outside the US by 0.17%. Bonds fell by 0.25% as the 10-year yield continued to rise. Oil dropped by 6.4%. Investors are worried about threats of inflation and interest rates that are rising quicker than anticipated.

The yield on the 10-year Treasury is up by 89% year-to-date, and the market started noticing the increase around February 8th, since then stocks have been flat. 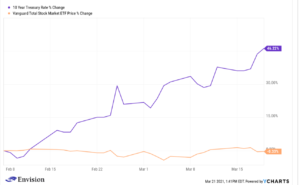 Taxpayers received $242 billion in stimulus payments on Wednesday, a good portion will end up in the equity markets. Bank of America reports that $68.3 billion was invested in equity funds this past week.

Former Treasury Secretary and Democrat Lawrence Summers is not happy about the stimulus, saying “these are the least responsible fiscal macroeconomic policy we’ve had in the last 40 years,” and putting the blame on both parties. Summers says we a facing a “pretty dramatic fiscal-monetary collision.” He says there is a 1 in 3 chance the US will face stagflation, or the Fed will push the brakes too hard forcing a recession.

US stocks advanced by 3.31% and international stocks were up by 1.85%. Bonds declined by 0.43% as the long end of the curve continued to see higher interest rates. The S&P 500 and the Dow closed at a record high. The Nasdaq 100, which was off its high by about 10% last week, rallied and is now down 6.3%. A massive stimulus bill and Biden’s announcement that every adult in the US can get a vaccine by May 1 fueled the optimism.

Higher interest rates on longer-term bonds like the 10-year could force expanded P/E ratios to contract, but the bulls are counting on booming earnings to offset the lower ratio to keep stocks on the march higher.

Randall Forsyth writes in Barron’s this week about Henry Kaufman, the widely followed chief economist at Salomon Brothers in the 1970s and 80s, who has written a new book, to be released next month, The Day the Markets Roared. A reference to his call that long-term interest rates would decline back in August of 1982. That set off the rally of the 80s, 90s, and arguably beyond. Kaufman now questions the independence of the Fed. “The implication is near-term political decisions may have greater force over financial market behavior than ever before.” Going on to say that “It seems to be that the equity markets are highly dependent on the continuation of monetary ease.” Basically, we are at the exact opposite point from August of 1982. Back then, we had sky-high interest rates with a tight Fed run by Paul Volker that operated with a long-term view, whereas now, we have artificially low-interest rates, almost at zero, with a Fed willing to monetize most anything and seemingly in sync with the desires of the administration.

Household wealth soared last year by 10% to an all-time high of 130.2 trillion. Of the 5.6% increase in the 4th quarter, almost all of it came from asset price gains.

Gamestop (GME) closed this week at $264.50 and got as high as $348.50. It has declined to about $40 in February after its first incredible run. The recent rally began when Ryan Cohen, the Board member and founder of Chewy, was selected to lead a board committee to work on the Company’s transformation into the digital age. GME is symbolic of this crazy market and some of the rampant speculation that is marking this era.

Some highlights from the week: