Some notes from this week’s Barron’s.

The world is getting tired of living in a US Dollar world. Nations had to deal with the impact of QE no matter if they wanted any part of it or not. QE pushed foreign currencies higher, hurting those countries exports. Countries around the world are now beginning to look for alternatives to the dollar. So another unintended consequence of massive QE is that the dollar slowly loses its place as the world’s currency. This is certainly not good for the long run.

Stephanie Pomboy of MacroMavens says that the decline of former currencies that at one time held a “reserve” status like the USD today, followed the decline of their international standing.

PICKING UP THE PIECES

It was time for the Barron’s round table to get together for their mid-year meeting. Gabelli likes IFF, IPG, CHMT, WFT and MSG.

Bill Gross thinks that if fed funds rate rises to about 2% beginning in mid 2015 through 2017, and not to 3-4% like the market expects, that today’s market valuations “are OK.” Gross likes BBN, PDI and PFF.

Scott Black picked SMCI and PDCE. Black said “The market will continue to rise because it is liquidity-driven. There is little downside risk.”

Brian Rogers said “The market turned rocky for a few weeks in April and is bound to have another rocky period in late summer or early fall.” Rogers still likes AMAT, CNX, CVX, NEM, AVP and PRMSX.

Fred Hickey is not happy. “The averages are up, but the market isn’t healthy internally. There are many divergences. Big-caps are rising, small-caps are falling. Breadth is terrible. The bullish sentiment of professional investors…is near record highs, which signals trouble…There is big trouble ahead.” Hickey’s picks are gold, silver, AEM and short IBM.

Oscar Schafer likes MFI.CA, RLD and AMRI. AMRI is run by the team that built TEVA. There goal is earnings of between $3 and $4 in about the next four years. The stock sells for $17.

Some notes from this week’s Barron’s

The slow and steady increase in prices has moved the equity averages to all time highs and volatility to lows. The VIX dropped below 11. Investor’s Intelligence bullish reading is up to 62.20%, second highest on record. Other peaks were 60.8% in August of 1987 and 62% in October of 2007.

In regards to the low VIX, Ben Levisohn writes that “the lack of heated action might not indicate that something is wrong, but rather that many market participants were just plain wrong. At the beginning of the year, they were nearly united in the belief that the bond yields had to rise, emerging markets would remain weak, and the high-flying, fast-growing stocks had nowhere to go but up. None of that happened.”

THE LINGERING COSTS OF WAR

Big increases in health-care costs for former troops will cause the Defense department to squeeze costs elsewhere which could have a long term impact on defense contractors like LMT, NOC and RTN.

THE PROBLEM WITH VALEANT (VRX)

Vito Racanelli points out that GAAP results “show a history of losses and declining results.” In 2013, free cash flow was negative $4 billion. Debt is up 400% since 2010. EV/Ebitda is about 20.

GDP for Q1 came in at -1.00%, revised downward from the preliminary estimate of a 0.1% advance. Weather was the main culprit. The economy has since resumed its moderate pace of growth. Employment numbers are generally improving. Other economic reports, while somewhat mixed, still point to continued growth. 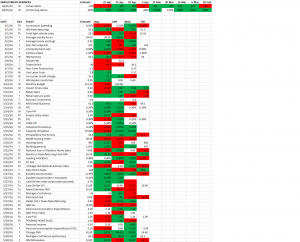 Charles Modow of Foundation Capital, an investor in peer to peer businesses, writes about the business.