US stocks were up for the week by 1.72% and closed at a record high on the back of strong earnings reports and a hoped-for interest rate cut coming up this week. UPS, Google, Twitter, and Starbucks all had strong earnings. Q2 GDP was up by 2.1% in Q2, better than the 2% consensus estimate, but the International Monetary Fund cut its worldwide growth prospects for 2019 and 2020, by 0.1%, to 3.2% and 3.5%. This is on top of earlier cuts, blaming trade tensions. Referring to trade, the IMF wrote that “Global growth is sluggish and precarious, but it does not have to be this way because some of this is self-inflicted.”

The U.S. economy expanded by 2.1% in Q2 with the help of a strong consumer. That was down from the 3.1% clip in Q1 but higher than anticipated. Consumer spending increased at an inflation-adjusted annualized rate of 4.3%. Uncertainty over trade was a factor in causing business investment to fall by 0.6%. Exports fell by 5.2% while imports were up slightly. 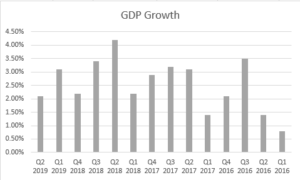 Congress and the White House reached a deal that makes everyone happy, except those who care about the fiscal soundness of the United States. The deal suspends the debt ceiling until July of 2021 and allows for more than $320 billion in spending above the limits set in the 2011 budget law. Republicans got higher spending for the military and Democrats got more spending for everything else.

Boris Johnson became the new Prime Minister of Britain, increasing the chances of a hard Brexit in October. Johnson seems confident he can negotiate a new deal, but that might be a problem since the EU as said repeatedly that the pact is non-negotiable. Furthermore, Johnson’s grip on government is fragile at best, he is part of a minority government that is essentially holding on by a string, subject to the whims of just three defecting lawmakers.

The ECB is signaling that it will cut short-term rates and restart their bond-buying program sometime soon. ECB President Mario Draghi says the economic outlook “is getting worse and worse”, especially in manufacturing (see below). Draghi is aiming to overshoot the banks 2% inflation target.

Germany purchasing managers index dropped to 43.1 in July from 45 in June. “The health of German manufacturing went from bad to worse in July…raising the risk of the euro area’s largest member state entering a mild technical recession,” said Phil Smith, an economist at IHS Markit. Germany’s services PMI still remains in the expansionary territory at 55.4, as does the composite at 51.4.

West coast home prices have declined for the first time since 2012 and home sales across the country fell by 2.2% in June, another indication that the long-awaited recovery in home sales has not yet arrived.

US stocks fell by 1.18% and international stocks dropped by 0.34%. The S&P 500 did close at a record high on Monday but fell on Tuesday and Wednesday after Trump said that China and the US were “a long way” from a trade deal. Stocks rallied on Thursday when John Williams, president of the New York Fed, said that “it pays to act quickly to lower rates at the first sign of economic distress.” On Friday, stocks gapped higher at the open but closed at the low for the day, it was reported that the US Navy shot down an Iranian drone and that Iran had seized a British-flagged oil tanker. Despite tensions with Iran, oil fell by 7.5% for the week, as inventory levels have been increasing around the world and the growth forecast for oil demand was revised down by 100,000 barrels by the International Energy Agency.

Earnings have been coming in better than expected so far, but still look like they will be down year over year. About 15% of S&P 500 companies have now reported, and earnings are projected to fall by 2.1% from last year, according to FactSet. That is better than the 3% decline as of the end of June.

Netflix took a big hit when after the company announced a decline in subscribers for the first time in almost 10-years. The stock fell by about 10%.

Retail sales increased by a strong 0.4% from May to June and by 3.4% year over year. April and May’s sales were revised down, but the June increase was above expectations. Overall, this was considered a positive report and indicates the consumer is still in good shape. That was also reflected in strong earnings by the banks, which were helped by consumer lending, and by the airlines, based on planes filled with travelers. Jamie Dimon, CEO of JP Morgan said, “The consumer in the United States is doing fine. Business sentiment is a little bit worse, most probably driven by the trade war.”

We wrote that gold might be breaking higher on June 21 and it looks like traders are anticipating more. The GDX, an ETF composed of gold mining stocks, surged by 6.8% this week even though the base metal only increased by 0.7%. With global tensions around the world high (Iran/US) and interest rates ridiculously low, and maybe sniffing out unexpected inflation down the road, gold is catching interest. The long-term chart of gold below shows how gold has performed when it has cleared resistance lines.

Stocks continued their march higher, advancing by 0.70% for the week, as Fed Chair Jerome Powell pretty much confirmed that a rate cut is on the way.

Federal Reserve chair Jerome Powell seemed to give the green light to an interest rate cut later in the month in testimony to Congress this week. While Powell did not say that a cut is definitely on the way, his testimony seems to be leaning that way. Powell highlighted risks to the economy including the trade war, a global economic slowdown, Brexit, and an exploding deficit. The idea now for a rate cut would be to reduce the risks of a recession before the wheels of the economy start moving downhill. Powell said: “The bottom line is, the economy is in a very good place, and we want to use our tools to keep it there.”

Usually, rate cuts happen when inflation is moving higher and/or there is visible stress in the economy. And usually, the Fed is starting from a higher base. Not this time. While the US economy is slowing it is still in slow-growth mode, asset markets are priced at all-time highs, the unemployment rate and the initial claims for unemployment are essentially at all-time lows. Liquidity is everywhere. A rate cut in an economic environment like this has harkened back memories to two other similar Fed moves.

New York Fed Chair Ben Strong cut rates in May, June, and August of 1924 to the lowest rates that were ever set by the Fed. The cuts were not in response to a weak US economy, but rather, to help Britain attract gold back into their country. The cuts led to a wave of speculation. The Fed eventually raised interest rates back to 4% but cut again in March of 1926, not because of a weak economy (the economic outlook was good), but because of a 9.1% sell-off in the Dow. Fed Board member Adolph Miller, the only dissenting vote, said this is “the most costly error committed by it or any other banking system in the last 75 years.” That led to more speculation and eventually the 1929 crash, helped along by a huge trade war (Smoot-Hawley tariff).

In 1998, the Fed reduced rates from 5.5% in September to 4.75% in November and would keep them flat until the following summer when they began to increase rates again. The Fed cut was in response to the Asian financial crisis, a Russian debt default and the near-collapse of the hedge fund, Long-Term Capital Management. The US economy was in good shape at the time, inflation was low, US equity markets were close to all-time highs, and markets were liquid. The market kept right on rising until the crash of 2000.

Time will tell what happens down the road, but for now, the age-old adage of “don’t fight the fed” appears to be the rule of the day.

Highlights of an interview with Robert Wilson, a famous short-seller from the 1960s and 1970s.

Markets barreled higher this week as US stocks increased by 1.64%, led by news of a truce in the USA-China trade war last Saturday. International stocks were up by 0.64% and bonds were flat. With the market at new highs and the advance-decline line increasing, the technical condition of the market looks solid and some analysts are now predicting a big run-up here in the 5-10% range. That might seem optimistic given lower ISM numbers and declining earnings (see below), but the price of stocks is ultimately based on supply and demand, and right now demand is greater than supply, probably helped by falling bond yields around the world.

One piece of good economic news this week was the jobs report. Nonfarm payroll increased by 224,000, which was much higher than the estimate of 160,000. The better than expected number sent stocks lower by around 1% on Friday (before recovering with just a small loss) as traders worried that a better economy would lower the odds of a Fed rate cut later in July. That is how the market sometimes works in its convoluted way when good economic news is bad market news and the other way around. The unemployment rate did move higher to 3.7% from 3.6%, but that was because of an increase in the total labor force. Year over year wage growth was 3.1% and the average workweek remained unchanged at 34.4 hours. 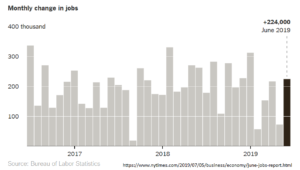 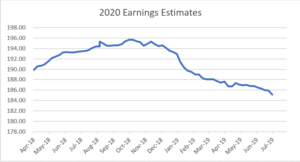 The Institute for Supply Management’s Purchasing Manager’s Index fell to 51.7. Above 50 is considered expansionary, but the index has been in a downward trend and is now at its lowest level since October of 2016. 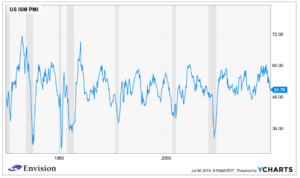