Stocks were down by 2.86% in the US and 3.92% outside the US. Bonds fell by 0.43%. Spiking interest rates and the fear of inflation dropped stocks.

The exploding interest rate makes some sense. As we have been writing about when you are spending trillions like it is nothing, something is bound to happen, whether that be inflation or higher interest rates, or both. It is too early to say if this kind of increase is a foreboding of things to come, or just a one-off. We do not want to relive the 1970s, at least in economic terms.

Interest rates have been artificially suppressed. And that has led to artificially high asset prices, in the stock market and also. It has also distorted the economy by giving a lifeline to “zombie” companies. It has suppressed the creative destruction process. So a return to a normal interest rate would be good, but not in a runaway manner. That would be too disruptive and cause a host of other problems.

Jobless claims fell to the lowest level since November, dropping by 111,000 to a seasonally adjusted 730,000 last week. Weekly claims rose as high at 900,000 in early January but have been dropping since as the job market appears to be picking up some slow momentum.

Consumer spending was up by 2.4% in January as household incomes increased by 10%, helped by stimulus checks. 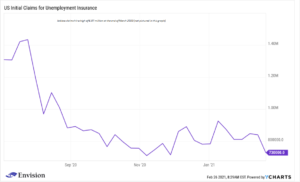 The exploding interest rate makes some sense. As we have been writing about when you are spending trillions like it is nothing, something is bound to happen, whether that be inflation or higher interest rates, or both. It is too early to say if this kind of increase is a foreboding of things to come, but let’s hope not. We do not want to relive the 1970s, at least in economic terms.

*Please note we are only counting the initial reading, so if it happened on day 1, and also on day 2 and day 3 or even a few days later, like day 5, that would count as just one reading.

Helped by stimulus checks, retail sales advanced by the most in seven months in January, up by a seasonally adjusted 5.3%. The increase topped all estimates and indicates strong consumer demand. The Atlanta Fed’s GDPNow model now projects a 9.5% annualized growth rate in Q1, up from 4.5%. Industrial production was also up, for the fourth consecutive month, increasing by 0.9%.

While retail sales were surging, so were producer prices, which jumped by 1.3%. That was the biggest increase in the records that date back to 2009. The rising producer prices (PPI) haven’t spilled over into the CPI yet, but it is probably only a matter of time. Now it is only one month and maybe it is an aberration, but when the government throws trillions into the economy and then wants to add a couple of trillion more, the threat of inflation has to be considered. Higher inflation would mean higher interest rates, which would make it difficult for the government to do anything other than pay off interest in the future, it would also cut into p/e ratios which could cause the market to decline. Maybe none of this happens but for those of us that lived through the 70s, it is a threat not to be taken lightly. 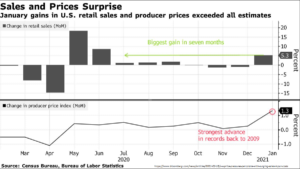 Stocks had a big week as US equities advanced by 5.25% and international markets were up by 4.95%. US stocks ended the week at a record high. It was the best week since November as investors were looking forward to a $1.9 trillion stimulus package. For the same reason stocks were up, bonds were down, falling by 0.35% as the prospects of inflation lifted interest rates on the longer end of the curve. Oil jumped by almost 9%.

Dropping virus numbers are also helping. How much the vaccination program has helped no one is sure, but the huge second tidal wave of Covid seems to be slowing, similar to what happened to other waves in previous pandemics. The Super Bowl this weekend will be a test to see if social gathering around the country ignites a rebound, but for right now, recent numbers are very encouraging. 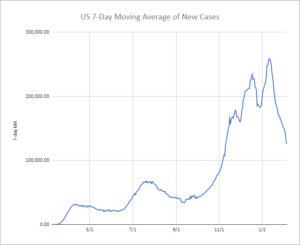 The Democrats are moving ahead without the Republicans on a stimulus plan valued at close to $2 trillion dollars. This is after a $900 billion plan passed in December and the trillions spent earlier in the year. There is simply no concern for the out of control deficits and the debt burden we are laying on future generations. We are putting the country in a dangerous situation at some future point when interest rates rise, but nobody cares. Biden should settle for a more reasonable plan that focuses on getting the country vaccinated, helping those who are truly in need, and for targeted infrastructure investments that will have a clear positive payoff. Even former Obama economic advisors Larry Summers and Jason Furman thinks the package is too big. Summers said, “stimulus measures of the magnitude contemplated are steps into the unknown.”

The economy just does not need a massive plan like this. Most of the spending will start to hit just when most of the country will have been vaccinated and a year-plus of pent up demand will start to be unleashed. All of this deficit spending, on top of more regulations, monetary expansion, and reduced international trade is a recipe for inflation, which potentially means much higher interest rates. And much higher interest rates on top of an out of control deficit will crowd out spending on needed programs in the future and threaten the value of the dollar. The government cannot act like the US dollar is monopoly money, because if they continue to do so, that is how it will end up.

Gamestop (GME) came back to earth this week. GME closed at $63.77, down 80% on the week and down by 87% from its high last week. It is still way above where it was a couple of weeks back, but while many were smart enough to cash out, there were probably more who bought at higher prices expecting GME to go even higher and are now left with huge losses, or those that rode the stock all the way up and all the way down. Moreover, the Wall Street Bets Reddit page, where many of these “investors” got their inspiration, was encouraging/telling their followers to hold GME stock straight through and not to sell no matter what. Of course, as the losses piled on, the prevailing Reddit theme was that the system was rigged, failing to take personal responsibility for buying GME at simply ridiculous prices and without regard to any fundamentals. The GME saga is just a sign of the times.

As is Dogecoin, a cryptocurrency that is flying high and is now worth more than $6 billion. Dogecoin was created as a joke in 2013. Like it was literally created as a joke, the developer wanted to create a coin that couldn’t be taken seriously. The developer, Billy Markus, spent a grand total of three hours one Sunday afternoon creating the currency. But Elon Musk has tweeted about it a couple of times in recent weeks and it has increased in value by 80%. In addition, the Reddit crowd is aiming to push the coin to $1 from its current 8 cent value. People are buying something with an intrinsic value of $0 but that doesn’t matter. It is the same mindset that pushed GME to $500 per share, but even worse, at least GME has a business with some kind of prospects (if it can be turned around) of generating cash flow.

Payrolls increased by 49,000 in January, and the December job loss was revised up to 227,000 from 140,000. Lower labor force participation dropped the unemployment rate to 6.3% from 6.7%. All in all, the payrolls report was considered a disappointment.

Normally, home prices fall in a recession, but not this time. Prices are up sharply, rising by 9.1% year over year in November. Home prices have benefited from Covid, as city residents move to homes in the suburbs, but also by the Fed’s monetary policy, which has included buying $40 billion per month in mortgage securities. That has reduced mortgage rates which have increased demand and thus, more expensive homes. The problem is first-time home buyers and others are being priced out of the market. The other problem, which we allude to above, is that excessive monetary and fiscal stimulus is starting to lead to inflation which could be a big problem down the road. 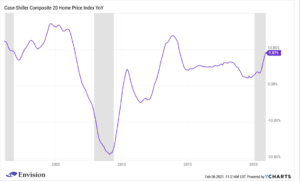