The higher interest rates, and the sell-off in stocks and bonds were mainly due to the release of the December minutes from the Fed indicating the chance that the Fed might begin to reduce its balance sheet sooner than expected, that is on top of the 3-4 interest rate increases that are now expected in 2022.

Non-farm payrolls came in at 199,000, much less than the anticipated 424,000 increase. But still, the overall report continues to indicate a very tight labor market. Unemployment fell to 3.9% from 4.2% last month, below the FOMC estimate of the the long-run equilibrium rate. Wage growth is now running at between 7 and 8% annualized.

Former Treasury Secretary Lawrence Summers said on Bloomberg’s Wall Street Week that “the level of heat we have in the labor market is consistent not only with high inflation but with accelerating inflation.” The Fed might have to cool the economy to get inflation under control.

Higher interest rates helped energy and financials, but hurt technology and the other high-fliers. Bitcoin is down by about 38% since its November high. The Nasdaq 100 is sitting right on support. This will be the third test at this level in recent weeks.

Fittingly, stocks ended the final week of the year on an up note, with US stocks advancing by 0.67% and international markets by 0.52%. The US markets closed the year just under the Monday high for the year.

The labor market remains super hot. There are lots of jobs out there and not enough people to fill them. Initial jobless claims came in this week at 198,000. That is very close to the lows dating back to 1969, and of course, the economy and the country is much bigger now, so proportionally, these are all time lows. 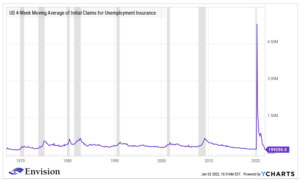 Holiday sales were up by 8.5%, although when you back out inflation of 6.8%, the real increase would be about 1.7%. The Omicron variant is hurting the economy, thousands of flights have been canceled in the last week, and it seems like the virus is literally everywhere. If you don’t have it or if someone in your family doesn’t have it, then a friend or neighbor does, lots of them. The speed with which Omicron is spreading might indicate that it will be peak much quicker than previous variants. Despite the fast moving virus, economists are expecting minimal intermediate or long-term disruption to economic growth.

Meanwhile, valuations are still stretched based on traditional metrics. Looking at the price/earnings ratio (see below), the current forward p/e is estimated at 21.37 versus an average since 2004 of 16.50. An offset to that is interest rates remain incredibly low, as an example, the 10-year yield is currently 1.52% versus a 2.77% average (since 2004). 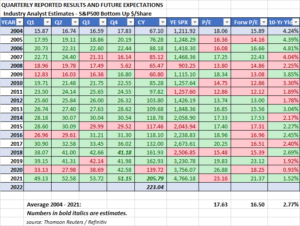