There was a hint of good news on the trade front this week. European Commission president Jean-Claude Juncker met with Trump and they agreed to work on an agreement with no tariffs and no subsidies (read more below). That, and generally favorable earnings, along with a solid 4.1% estimated increase in Q2 GDP, advanced stocks by 1.07% in the US and 1.08% outside the US. Bonds fell by 0.18%, as yields were up across the curve by about 7 basis points.

Prior to his meeting with European Commission President Jean-Claude Juncker, Trump tweeted “I have an idea for them. Both the U.S. and the E.U. drop all Tariffs, Barriers, and Subsidies! That would finally be called Free Market and Fair Trade! Hope they do it, we are ready – but they won’t.”

The White House team went into the meeting looking to negotiate, chief economic advisor Larry Kudlow said before the meeting, “I just say, keep an open mind—you might be surprised by the outcome of this meeting.”

Surprised we were, the parties agreed to work towards zero tariffs and the removal of all trade barriers for non-auto industrial goods. The EU would increase its purchases of soybeans (very soon) and would import large quantities of natural gas. The two parties would work together to reform the World Trade Organization and to end the theft of intellectual property, forced technology transfers, government subsidies and the selling of products below cost. If all this happens we give Trump and his team major credit. A world with free, or freer trade, will improve economic outcomes across the globe.

The jump to work a deal with the Europeans might have been pushed along by increasing political heat here in the US. The initial impact of the tariffs is starting to be felt. Earlier in the week, the Trump administration said it would provide $12 billion in support to farmers impacted by the trade war. The costs of tariffs are also showing up on some company conference calls, as executives worry about higher costs and lower sales.

Existing home sales fell for the third consecutive month and are now down 2.2% year over year. Higher costs are holding back prospective buyers. Prices of existing homes are up 5.2%, and mortgage rates on a 30-year fixed, while still historically low, have increased to 4.54% from 3.92% a year ago. New home sales were down 5.3% in June.

Facebook shares fell by 19%, losing $120 billion in market value, as the company projected slower revenue growth going forward.  Twitter dropped by 21% after reporting a drop in users. However, most of the drop in users were “fake” or “fraudulent” accounts, apparently, investors would rather Twitter have kept those fake accounts!

Strong corporate earnings helped offset trade and currency concerns as  US equities managed a small gain of 0.1%. International stocks did better, up 0.37%. Of the 75 S&P 500 companies that reported earnings, 71 beat forecasts. Looking forward, analysts are still revising earnings forecasts higher for 2018, 2019 and 2020. And those strong earnings are powering this market, at least for now, despite concerns about the trade war. Earnings projections have been revised up over the last quarter (13-weeks) by 1.92%, 1.90%, and 1.58% respectively, per Thomson Reuters.

In Congressional testimony, Fed Chairman Jerome Powell said the following regarding tariffs, “In general, countries that have remained open to trade that haven’t erected barriers including tariffs have grown faster, they’ve had higher incomes, higher productivity. And countries that have, you know, gone in a more protectionist direction have—have done worse.”

Trump then criticized Powell, saying that raising short-term interest rates will hurt the US economic expansion. Traditionally, presidents have refrained from speaking about monetary policy. If Trump is worried about hurting the economic expansion, he should first look at this trade policies, but conveniently, he is setting up Powell to be the fall guy if the economy begins to slow.

As we wrote a couple weeks back, “beware the law of unintended consequences.” Here are a couple to start –  a higher US trade deficit and currency wars. Rising US interest rates, the beginning of the trade war, and slowing Chinese growth have been pushing the value of the Chinese yuan down. Over the last month, the yuan has fallen about 5% against the dollar. The weaker yuan offsets some of the impact of U.S. tariffs by making Chinese goods cheaper in the U.S. and U.S. goods more expensive in China., the result might be a higher trade deficit with China. The exact opposite of the intended impact of the U.S. tariff policy.

As the yuan has dropped, there was little sign that China’s central bank intervened to help halt or slow the slide, so Trump accused China as well as Europe of “manipulating their currencies and interest rates lower.” Jens Nordvig, a currency strategist at Exante Data said, “The real risk is we have a broad-based unraveling of global trade and currency cooperation, and that is not going to be pretty.”  Nordvig fears the trade war will shift to a currency war. 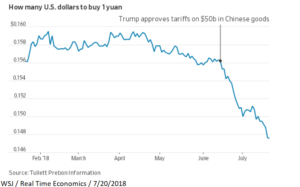 It was another up week around the world, and another week of tariffs. The White House said it would add 10% tariffs on $200 billion in Chinese products. The tariffs won’t take effect for two months. Supposedly the recently enacted tariffs and the threat of the new tariffs are intended to open up markets, but the administration has yet to clearly state what their objectives are, and one must wonder if they even know. The market did fall about 1/2% on the news, but otherwise, stocks were up every day last week.

US equities were up 1.34% and international markets advanced by 0.57%. The S&P 500 cleared its March and June highs and is now 2.5% off the January 26 all-time high price. Interest rates increased by about 5 basis points. The spread between the 2 and the 10-year Treasury’s fell to 28 basis points (down 1 bp).

The market is going one way, but consumer confidence is going the other. The University of Michigan’s Consumer Sentiment Survey declined. Chief Economist Richard Curtin said “The darkening cloud on the horizon, however, is due to rising concerns about the potential negative impact of tariffs on the domestic economy. Negative concerns about the impact of tariffs have recently accelerated, rising from 15% in May, to 21% in June, and 38% in July (see the chart). Among those in the top third of the income distribution (who account for half of consumer spending), 52% negatively mentioned the impact of tariffs on the economy in early July. The primary concerns expressed by consumers were a decline in the future pace of economic growth and an uptick in inflation.” 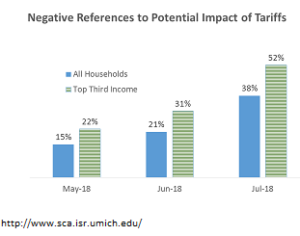 Inflation rose to the highest rate in six years. The Consumer Price Index was up 2.9% year over year. Inflation is now rising faster than average hourly wage growth, meaning earnings are not keeping up with the cost of living. 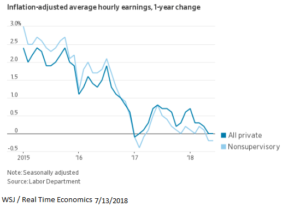 The “official” start of the trade war apparently was not a concern to investors, as stocks rallied around the world this week. US equities were up by 1.68% and international stocks advanced by 0.35%. Bonds were up by 0.31% and oil fell by 0.47%. A strong US economy buoyed by a solid jobs report was enough to move stocks higher. The 2-10 yield curve narrowed to 28 basis points, the smallest gap since 2007.

You can say that the trade war is now official as the US imposed $34 billion in tariffs on imported Chinese machinery, auto parts, and medical devices. China said it will respond in kind on soybeans and sport-utility vehicles. Oxford Economics estimates that the $50 billion in tariffs will reduce growth by 0.1% in each country. Add on another round of $200 billion and knock off 0.3% in 2019. But there are likely to be add-on effects from reduced confidence, slowing investment, less efficient supply chains, etc.

The US and Canada imposed tariffs on beef and farm goods. The European Union threatened tariffs on $300 billion in products if the US imposes automotive tariffs. Trump talks about exiting the World Trade Organization.

For now, though, markets are mixed on the ultimate outcome, many believe it will all work out in the end with limited short-term damage and longer-term benefits. Trump is counting on a strong US economy to give him greater leverage and to force concessions from trading partners.

The tariffs are not enough to do real damage, at least not yet. But what happens if countries go back and forth and each side raises the stakes and the trade war dramatically is amplified. At a minimum, what might a much deeper trade war lead to? For one, you would get higher prices. Higher prices might lead to a more aggressive Fed meaning higher interest rates. And remember, these increased prices and interest rates would not be due to a stronger economy, we are talking about self-inflicted wounds. Higher prices will reduce demand for products and higher interest rates will hurt debt-heavy companies, both might lead to job cuts. Higher inflation, higher interest rates, job cuts…that sounds like the end of an expansion. Beware the Law of Unintended Consequences.

Employers added 213,000 jobs in June. Unemployment rose to 4.0% from 3.8% but that was due to 601,000 new entries into the workforce. That is considered good news. Given the strong job market, and theoretically greater demand for workers than supply, the new entries should soon find work and further help an already solid economy. Average hourly earnings rose 0.2% and 2.7% year over year, indicating that labor costs are still under control.

In a sign indicative of a tight job market, workers are now leaving their current jobs at the fast rate in 17 years, a signal that they feel confident in the ability to find more satisfying work at a higher pay. 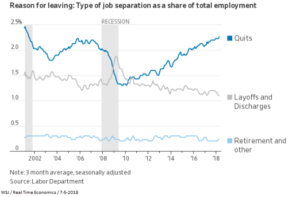