US equities increased by 0.17%, but the NASDAQ Composite surged by 2.2% on Friday and was up 1.1% for the week on the back of strong earnings from AMZN, GOOG and MSFT. AMZN jumped 13% on the day. It was the best day for the index since March of 2016. The dollar increased by 0.90% on dovish statements from the European Central Bank (ECB). Oil was up almost 4%.

International equities were down by 0.20% for the week. But Japan was up. The Nikkei is now on a 16-day winning streak and only declined one-time in October. That breaks the record of 15 set in March of 1988.

According to the Bespoke (bespokepremium.com) almost 1,000 companies have now reported Q3 earnings. 63.4% have beaten earnings estimates and 61% have beaten sales estimates. Companies overall are optimistic, and as of now, the spread between companies raising guidance versus lowering guidance is +3%, which is the highest level since Q3 of 2010.

The advance reading of Q3 GDP came in at +3.0%. A strong report given that the quarter was negatively impacted by the hurricanes. That makes back to back quarters of >=3% growth (assuming the number stands in future revisions). For the last few years, Q2 and Q3 have been the strongest quarters, but an early projection for Q4 shows it might be three in a row, the NY Fed NowCast has Q4 growth at 3.05%.

Mario Draghi announced that the ECB would halve the value of monthly bond purchases to 30 billion euros beginning in January. At the same, they announced the purchases would extend to at least September. The statement was considered dovish by the markets and the Euro fell. 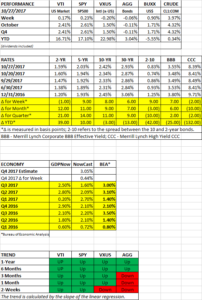 The endless rally continued amidst a sea of calm, as US equities increased by 0.81%. It has now been 350 days since the last pullback of only 3%, the second longest streak on record.

The slowly climbing market represents a stark contrast to 30-years ago this past week when the 1987 market crashed. Fuel for the rally continues to be solid financial reports. So far, 70% of the companies that have reported earnings have topped estimates, and 72% have beaten on the top-line. The market was also helped when Senate Republicans agreed on a budget that would allow tax cuts to pass with a majority of the votes, rather than 60.

Our quarterly Review/Outlook Webinar was done on Saturday. You can find it at this link: https://www.youtube.com/watch?v=2d-pQLkfDVI.

Amidst all the talk about the tax cut plan, the resulting increase in the Federal deficit is for the most part being ignored. Proponents of the tax cut argue that increased growth will pay for the resulting deficits, but most economists do not buy that to the extent necessary to cover the lost revenue.

In this week’s Barron’s, Gene Epstein writes about the mushrooming debt and how it might lead to exploding inflation. In his 2007 memoir, Alan Greenspan predicts inflation will jump much higher around 2030, to around 4.5% or higher.

Greenspan’s predictions are in sync with the non-partisan Congressional Budget Office, that debt will soar due to exploding eldercare entitlements. In the face of out of control debt, the pressure would be immense for the Fed to print money and buy a portion of the federal debt. That would be liking pouring gasoline on a fire, causing inflation to burst higher.

When the Fed went to the printing presses over the last decade, inflation didn’t pop. But 2030 is likely to be a different era than what we just went through. The last few decades have been helped by the disinflationary impact of cheap labor around the world. But that will be played out by 2030. Plus, the amount of money needed to print will be far greater than what we just went through with no end in sight.

Higher inflation will depress the dollar, which will result in a sell-off of US bonds by foreigners, compounding all of the above problems.

All the more reason to seriously consider how the proposed tax cuts will impact the national debt long-term. What we really need is tax reform to promote an efficient economy, not pure tax cuts.

Jobless claims hit a record low of 222,000. The job market continues to be the bright spot in this economic expansion. 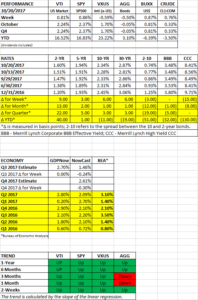 Robert Shiller writes about the impact of mass psychology on equity prices. Click to read.

US equities improved slightly, up about 0.13%, while international equities advanced by 1.89% (see below). Bond rallied by 0.53% as interest rates fell and the curve got flatter. The dollar declined and crude jumped by 4.83%.

The MSCI World Index of large and midcap stocks from 23 countries hit another high on Friday. According to fund tracker EPFR Global, records amounts were invested in global stocks funds for the week ending October 11. Cheaper valuations and solid earnings are helping encourage investment overseas. The forward P/E in the US is about 18, up from 17 in January, while the P/E ratio on the STOXX Europe 600 is 15.2, up from 14.8. In Japan, the P/E on the Nikkei has fallen to 16.8 from 17.8 during that time. Overseas economies are also earlier in the economic cycle than the more mature US cycle.

Randall Forsyth writes about volatility in his Barron’s column this week. The volatility index continues to hover at close to all-time lows, closing Friday at 9.61. As shown in the chart below, the VIX has been hovering in the 10 area and below of late, much lower than historical norms, despite threats of war with North Korea, political instability in Washington, rising rates, and the soon to begin unwinding of the balance sheet. Traders have cashed in by shorting VIX futures or buying ETFs that profit from contango in the futures markets (when the near-term VIX contract is priced lower than a longer-term contract). If and when the market corrects, there could be huge short covering in the VIX, leading to unintended consequences, kind of like portfolio insurance in 1987, or mortgage-backed security fiasco of 2007. 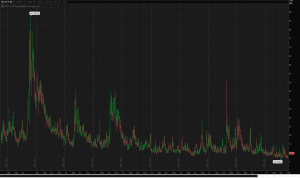 Trump is close to naming his choice to lead the Federal Reserve. The choices appear to be current chair Janet Yellen, Stanford economist John Taylor, former Fed governor Kevin Warsh and current Fed governor Jerome Powell. Both Taylor and Warsh are considered more hawkish in terms of interest rates. While we do believe that Yellen was way to dovish in managing rates over the last few years, we are in agreement with her recent moves to slowing normalize rates and to gradually unwind the balance sheet.

New unemployment claims fell to 243,000. Since hitting a peak of 298,000 after Hurricane Harvey, new claims have been consistently falling and are now back in the pre-hurricane range. A historically low number. 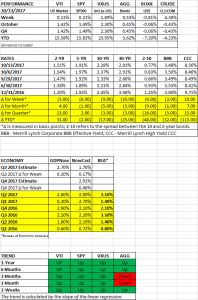 US equities advanced for the fourth week in a row, up 1.29% and continued their recent outperformance over international equities, which advanced by 0.40% for the week. Bonds fell slightly, down 0.08%, as interest rates were up about 5% across the curve.

The general consensus over the last few weeks has shifted. In August, the mood was that we would have some kind of pullback, but now, the “experts” seem to think it is smooth sailing ahead, at least for the near-term. That in itself may be some kind of warning.

This Monday will mark 333 business days without a 5% pullback. The last time that happened was the period beginning on November 23, 1994. Assuming nothing crazy happens on Monday or Tuesday, this will be the longest such period ever.

The Global Purchasing Managers Index (PMI) came in a 53.2 in September, its highest level since May of 2011, indicating continued worldwide growth. The international economy is now back to pre-crisis growth levels. Almost every country is now in growth mode. Developed markets showed a slight edge over emerging markets, and Europe was the strongest region.

Here in the United States, the Institute for Supply Management’s (ISM) September Manufacturing Report came in at a very strong 60.8. That is up from 58.8 in August and it is the highest reading since May of 2004. It was the 13th consecutive month of growth in manufacturing.

Initial claims for unemployment fell by 12,000 to 260,000. Claims are still being negatively impacted by the hurricanes but are at levels that are considered historically low indicating a continued tight job market.

The Atlanta Fed’s GDPNow shows Q3 growth at 2.50% and the NY Fed’s Nowcast has growth at 1.53%. The Nowcast, which also is currently forecasting Q4, has growth improving to 2.45%. 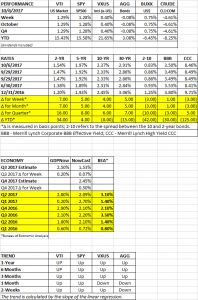 September turned out to be a strong month. The Dow was up 2.08% while the average for September has been a 1.09% loss, according to the Bespoke Investment Group. But small-caps were the story in September, the Russell 2000 was up 6.09%, helped by a stronger dollar and the possibility of tax reform (see below). Financials also were strong, the KBE was up 9.08% and energy advanced by 8.75% (XLF). In fact, September looked a lot like the post-election rally.

For the first 9 months of the year, US equities are up about 14%, international equities by 21% and bonds by 3%.

Markets advanced on excitement over tax reform, whether the proposal ever makes it into law is another matter.

On the individual side, there would now be three brackets instead of seven, the highest rate would fall from 39.6% to 35%, business income would “pass through” at a 25% rate, the estate tax would be eliminated, and the deduction for state and local taxes would be taken away.

An obvious problem is that everyone will now try to move individual income to “pass-through” entities (LLCs and Sub-S corporations) in order to take advantage of the lower 25% rate for high-income earners.  If the idea is to simplify the tax code, this provision does the opposite.

And taking away the deduction for state and local taxes would likely doom this tax bill, in its current form, from ever being passed. There would be too much opposition to that, even though it makes sense from a simplification standpoint.

For corporations, the maximum tax rate would fall to 20% from 35%. But companies would now be taxed on international profits. Overall, it is estimated that this would add about $10 to S&P 500 earnings. It would also help small companies, even more, thus the big rally in small-caps.

The third tier to the tax plan would be the repatriation of US profits currently being held overseas at a reduced rate.

Federal Reserve Chairwoman Janet Yellen said if the Fed determines that there are long-term changes in the trajectory of inflation that it could slow down the pace of interest rate increases. Inflation has been coming in lower than the Fed’s 2% target this year, leading some economists to want to keep interest rates lower for longer,  but that also could lead to financial bubbles that would present bigger problems later.

Under the current scenario, the Fed will probably continue on the path of gradual rate hikes. The market is now expecting a December rate hike. 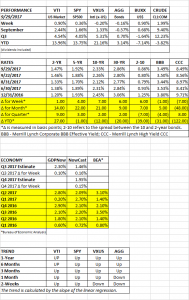