Dow was up 0.66% and the SP500 up 1.22% for the week. There appears to be some slight deescalation in hot spots around the world as a ceasefire held between Israel and Hamas and US airstrike relieved pressure between ISIS and Kurdistan.

George Friedman of Stratfor sees 10 plus years of “Lebanonization” of the middle east. In other words, civil wars that will tear apart countries that were artificially created back in 1916. This will likely translate into rocky financial markets. Friedman thinks Putin might be tossed out at leader of Russia at some future point not that far away.

Germany’s economy declined and 10-year bunds fell below 1%. Output in Japan fell 6.8%. Wal Mart reduced its guidance on earnings. Store traffic declines for the 7th straight quarter. Carl Icahn said “We are in a major asset bubble that continues to grow.”

SOME COMPANIES THAT BARRON’S WROTE ABOUT THIS WEEK

Andrew Bary’s article says that the recent financial engineering by Kinder Morgan (KMI) makes the Company overpriced. Jack Hough writes about four companies that are “ready for a rebound”, they are BBT, COP, JNPR and UTX. Jonathan Buck’s article on TNTE.Netherlands says the stock can continue to decline. David Englander says ABM can increase by 15% over the next year. The cover story is on the positive prospects for SLB.

AN INTERVIEW WITH STEPHEN AUTH

Auth thinks the market can increase 30% over the next 18 months.

Dow advances 0.7% and the SP500 advances 1.2% to 1955.06. Industrial production rose and job openings increased. Retail sales up only 0.1% below expectations and the economy contracted in Germany and Italy by 0.2% each in Q2. Earnings reports are improved by 10.2% over last year. About 59% of stocks have beaten earnings estimates and 61% have beaten revenue estimates. 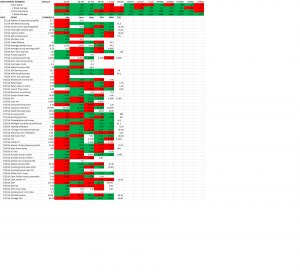 Up & Down Wall Street

Market was down sharply early Friday morning on news that the US was bombing the Islamic State terrorists in Iraq. But when news broke later that Russia was withdrawing troops from the border with Ukraine the market rallied.

Geopolitics has started to impact the markets with problems in Ukraine, Gaza and Iraq. The DAX is down abut 10% and there are record low yields on government securities in Germany, France and Finland. The Euor economy does not look good.

Meanwhile in the USA, the bottom line is healthier but a lot of that has to do with financial engineering from repurchases, M&A, tax inversions, etc.

Randall Forsyth’s column closes talking about closed-end funds for bank loans. Generally, they are selling at discounts of around 8% meanwhile they have had increases in net asset value. Example – FCT.

Problems for VRX – if the US prevents American companies from playing the tax inversion game, it would lower the chances and the prices someone would pay to take over VRX. Also, as VRX shares continue to fall in price it reduces the attractiveness of a stock offer in VRX takeover attempts.  And VRX has reduced revenue and earnings guidance in 2010. Thomas Tobin of Hedgeye says VRX can hit $200 if they can dodge US taxes and acquire Allergan, or it can fall to $70 otherwise (see also Vito Racanelli’s comments on 6/9/14).

The US hit rebels in Iraq and a US General was killed in Afghanistan. Bank of America agrees to pay $17b to settle mortgage claims. Russia has implemented import bans in reaction to US and European sanctions over Ukraine. The Ebola virus has now killed almost 1,000 and has been declared a public-health emergency. The Sprint/T-Mobile deal falls apart.