An article in Institutional Investor, written by researchers at AQR, suggests that small adjustments from market timing signals, as opposed to binary (all in or out) decisions, might help performance. Click for the article. 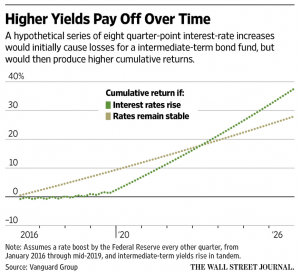 The market etched out a gain in November. The overall US market as measured by the VTI gained 0.63%. The SPY was up 0.39%. International x-US (VXUS) dropped 1.32% and the aggregate bond index (AGG) fell 0.42%. The treasury curve flattened slightly. The 2 and 5-year notes were up by 19 and 13 basis points while the 10 and 30 year both increased by 5 basis points.

The financial sector (XLF) was the big winner, plus 1.99%. Higher anticipated interest rates was the driver. On the flip side, utilities dropped 2.13% for the same reason. Commodities took a major tumble. Gold (GLD) was down 6.75%, silver (SLV) down 9.19%, oil (USO) down 12.69% and agriculture (DBA) down 3.62%. Commodities were hurt by more weak economic news from China. Imports fell 19% there.

During November it became clear that the Fed will hike rates in December. Strong job numbers are too favorable to ignore. October payroll was up 271,000 versus an estimated 185,000. The unemployment rate dropped to an even 5.00%. Average earnings were also up.

The anticipated interest rate hike dropped the SP500 3.6% for the week ending 11/13. But it rallied the following week when minutes released by the Fed made clear that the pace of interest rate increases would be slow.

Terrorism tried to interfere with the markets with a brutal attack in Paris by ISIS on Friday night, the 13th. But the market shrugged that off with a 1.5% gain on the following Monday. Later in the month, Turkey shot down a Russian jet. Another indication that the world is becoming a more dangerous place.