Economic reports were good this week. The IHS Markit Composite Index had off-the-chart numbers, coming in at 68.1 up almost 5 points from last month and much higher than the 50.0 that separates expansion from contraction. The service sector scored 70.1, and manufacturing activity was 61.5, both all-time highs. Unemployment claims were down by 34,000 to 444,000 last week. That was the lowest number since March of 2020. However, economists’ expectations are catching up with the data. However, housing starts were lower than anticipated and the pace of mortgage applications slowed from the prior month. The Citibank Economic Surprise Index has been falling steadily and is at 14.7 now down from about 80 earlier in the year.

Fed minutes released this week alluded to the possibility of slowing the pace of asset purchases sooner rather than later. Currently, the Fed is buying $120 billion a month in securities and most economists did not expect that to be cut back until 2022 without even a mention of it until the August meeting. But in light of it being discussed at the April meeting, the possibility now exists that later in 2021 is on the table. Massive Fed purchases have kept interest and mortgage rates artificially low, pumped up asset prices, led to excess speculation, etc. It also has helped invigorate the economy and reduce unemployment. But the economy has been steadily improving for months now and the longer we are on the medicine the harder and more painful it will be to get off it. 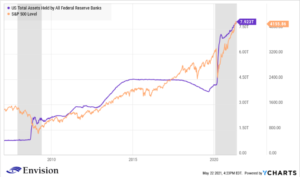 One area of crazy speculation, helped by too much money in the system, is cryptocurrencies. Bitcoin and its cohorts might make up the biggest bubble ever, or maybe it is the future of money, depending upon who you ask. Bitcoin was up by about 600% in the last year back in April but has since fallen 41% to $37,339/coin (as of Saturday). On Wednesday alone, bitcoin dropped by 40% from the previous day at one point. A big argument in favor of bitcoin is its limited supply. While the US and other countries seem to do everything possible to devalue their currencies by issuing more of it, bitcoin’s supply is limited. The problem though is that there is an unlimited supply of potential cryptocurrencies that can simply duplicate bitcoin. There can be Bitcoin 1, Bitcoin 2, etc. In fact, there are already hundreds of alternative currencies that people speculate in that are not even limited in supply. While Bitcoin flattened out before its recent fall, other cryptos were still flying higher day by day. So there is not limited supply. And obviously, there is no intrinsic value in a made-up electronic currency. Having said that, there are lots of very smart investors that believe in Bitcoin as an asset class for the long term.

As someone once said, “be careful what you wish for, you just might get it.” Well, the Fed has gotten their wish, at least so far, the biggest inflation cheerleaders saw it rise by 4.2% in April, the biggest increase since 1981, and much higher than expected. The Fed isn’t worried though, thinking the increase is transitory, lets hope they are right because we do not want a 1970s replay. Stocks were down by 1.4% on the week on the news.

In the last two weeks, inflation had a big overshoot and hiring a big undershoot. Of course, one month is not a trend and there are good explanations for all of this, but inflation and unemployment together go by the nightmarish name of stagflation.

If inflation continues to increase at an unexpectedly high rate it could force the Fed’s hand on interest rates, which would lead to lots of unintended consequences.

US stocks increased by 0.71% and international markets were up by 1.47% as the incredible rally rolls on.

The US added only 266,000 jobs in April, way short of the consensus estimate of 1,000,000. The unemployment rate increased to 6.1% from 6.0%. While the economy is certainly growing, some businesses remain hesitant to hire and many say they simply can’t find employees. Prospective employees are still worried about the virus, some stay home because of child-care responsibilities, and others receive unemployment benefits that are high enough to offset the need to go back to work. The demand for help has pushed wages higher, rising by 21 cents to $30.17 per hour and the average workweek increased to 35 hours. The labor-force participation rate hit its highest level since August at 61.7%.

GDP increased by 6.4% in the first quarter. Excluding the increase in Q3 of last year, it was the fasted rate of growth since 2003. 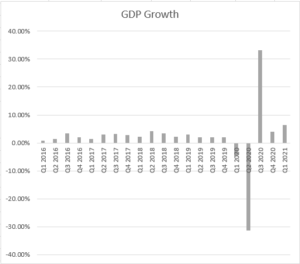 The service sector in the US grew at a record pace in April. The US Services Purchasing Managers Index was 64.7, up from 60.4 in March. 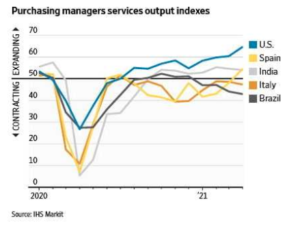