Here is a review of some of the economic numbers that came in last week: 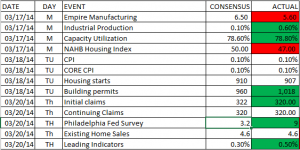 Some of my notes from this week’s Barron’s. Pick up the hard copy for the full story and much more.

APPL – possible gain of 20% or more with introduction of new products later in the year. Bear case (1) markets are saturated, margins will compress, and new categories won’t be able to move the needle and (2) Steve would have done it better.

On the plus side, new product including bigger screen later in the year. APPL has sticky customer base.

EPS to rise 3% this year to $42.76 and another 8% next year. Shares are at 12x 2014 projected earnings at 8x taking out the cash. Possible buyback and higher dividends with new CFO. And buyback would be at these value levels.

RIGHT THE SHIP AT MCDERMOTT

A strategy that allows fee-only RIAs to provide the income-guarantee benefits of variable annuities without the downside of surrender charges, high fees, and ordinary income tax treatment of investment gains.

Investing wisdom by Francois Sicant of Tocqueville, click to read.

Please purchase a hard copy of Barron’s for the complete story and more, or go to Barrons.com. Below are just some notes that I found of interest.

US-Russian relations turned further south as the rhetoric heated up between the two powers ahead of the Sunday referendum on whether Crimea will secede from Ukraine. Both sides threaten severe economic sanctions against the other. In the middle, $200b of treasury bonds held by the Russians. The Russian market has been clobbered and the spillover hit the US markets this week.

Economic conditions remain stable to up in the US as illustrated by the Cleveland Fed Financial Stress Index. “Stress” levels have declined from early February and are below normal.

Is it overvalued or undervalued? Ben Levisohn ran through several interpretations of the current value of the market. Here are some:

Jason Trennert of Strategas Research Partners says the p/e on forward earnings is 15.6 and can rise to 18 or more. That would be 12.4% from here. But this would mean that interest rates remain low for the next couple of years. Bianco also says that the 10-year yield can rise but has to remain less than 10%. Tobias Levkovich says valuations will rise with profits at this point.

Lori Calvasina of Credit Suisse says the Russell 2000 is trading at 19x future earnings which generally has meant a small decline over the next year. But the price to sales ratio looks more dangerous, trading at 1.6, which historically means a double-digit decline.

WHERE THE STOCK MARKET BARGAINS ARE

Banks, insurers and oil drillers. “Buying stocks with depressed earnings multiples and low price/book ratios historically has proven successful, partly because they provide a margin of safety.” (Some names listed we are long in include RIG, MET, GM., AIG and C).

WHY MATSON COULD HIT A SQUALL

HOW TO BEAT BUFFET FOR A BILLION

MUNICIPAL BOND FUNDS WORTH A LOOK

AN INTERVIEW WITH JEREMY GRANTHAM

Runs the Wells Fargo Advantage Absolute Return (WARAX) fund (among others) which aims for a 5% real return over a market cycle. Grantham says we are between one and two standard deviations above normal distributions of valuations. This is not bubble territory yet. But two standard deviations would be and that would mean the SP500 would be at 2350.

“By the end of a real bubble, individuals are gung-ho, and they are not gung-ho yet. That says a lot.”

“Obviously, the housing bubble was the absolute direct result of the Fed’s bailout techniques, which included incredibly lower interest rates, and then there was eventually some help from the ridiculous financial instruments that were sold, along with very low standards for getting a mortgage.”

Grantham says there is a big problem because all of the hedge fund guys are putting tremendous faith in the Greenspan-Bernanke-Yellen put. What might be different in the next crisis is that now governments are maxed out on credit instead of individuals or business.

“…the market, over a seven-year horizon, is mean-reverting, and it really does pay to avoid the particularly overpriced asset classes. But on a shorter-time horizon, you can get whacked around the head, as we have been frequently.”

Some areas that are reasonable are emerging markets, European value stocks and high-quality US stocks.

Notes from Barron’s 3/10/14 – pick up the printed copy at a news stand or check out barrons.com. Below are my notes from this week’s edition.

US household net worth now stands at $80.6 trillion compared to $68.8 trillion in the second quarter of 2007.At the same time, the Fed’s balance sheet has increased to $4 trillion from $1 trillion representing a 90% correlation with the growth in household assets.

The increase in the Fed balance sheet hasn’t impacted t-notes, which are about even with five years ago, but it has impacted spreads on corporate bonds. High-grade corporates have come in by 125 basis points and high-yield spreads have declined by 1400 basis points. That has allowed interest costs to go down, dividends and buybacks to increase, and is helping fund mergers and acquisitions.

Chaori Solar defaults on publicly traded debit in China last week, that was a first. Jeremy Hale of Citigroup says “this default may be the tip of the iceberg.”

Companies with dot-com like bust valuations include TSLA at 150x future earnings, NFLX at 113x, and TWTR at 3,196x.

The Crimean government voted to secede from Ukraine and join Russia a Russian troops continued to show their presence there. The US and Europe responded with financial sanctions.

METLIFE ON SALE FOR PEANUTS

(disclosure – we are long MET)

One of the cheapest stocks in the SP500 based on earnings and book value. Price at $53, 9x projected 2014 profit and 1.1x book value that excludes unrealized gains. Yields 2.1%. Stock could hit $60. Play on stronger stock market and higher interest rates. P/E on 2015 projected earnings is 8. ROE around 12%.

DAIMLER’S RACE AGAINST ITSELF

UP FROM THE DEPTHS

GLDD – controls 40% of the dredging industry which is big now due to hurricanes and coastal restoration. Stock is down 13% to $8.69 due to losses in the demolition business which it is selling. Scott Levine from Imperial Capital values the company at $11.50. Company works on port expansion, pipeline and tunnel digging, breakwaters, jetties, canals, beach restoration. Earnings could rise 8% this year to $0.35 and $0.53 in 2015.Has a $515m backlog.

(disclosure – we are long ARCC)

Bargains can be found in pass-through companies that can benefit from an improving economy such as certain MLPs, REITs and BDCs.

NTI and CVRR are downstream MLPs (they refine oil and gas and turn it into higher value products). Selling at 6x projected earnings. Big exposure to price swings and the economy. Profits depend on the crack spread which is the difference between crude and end products. Spread is currently wide. Average Wall Street target would give NTI 13% upside and CVR 19%.

EPR is a REIT that owns movie theaters, charter schools, ski and water parks and golf complexes. Sells for 13x ffo. Up over 24% in last year but yields over 6%. Shares can hit $60 from $53 according to Anthony Pallone at JP Morgan.

ARCC is an industry leading business development company. Trades at 11x and yields 8.9%.

There is risk with all of these names.

TIME TO PACK SOME SAMSONITE SHARES

BRK is better bet, smaller premium to book value and more earnings power, although IEP increased asset value by 50% last year compared to an 10% increase at BRK. IEP at 50% premium to indicative asset value. BRK trades at 1.35x book value but might be at a discount to intrinsic value.

Mentions a business development company called Garrison Capital (GARS), yields 10% and trades for less than book value. Could be a sell off due to some BDCs being dropped from indexes.

When getting credit starts becoming easy, then that is often a signal that a top maybe near. I don’t think we are necessarily there yet, but when loans are easy to obtain and rates don’t factor in appropriate risk, that is a dangerous sign.

Today’s WSJ points to a step in that direction, the WSJ writes about new lenders jumping into the subprime market. But subprime borrowers no longer hold that title, one such lender called FreedomPlus calls them “emerging prime.” To Lending Club, they are “near prime.” Lending Club originally required credit scores above 660, but that has now dropped to 640.

Santander Consumer USA Holdings (SC), a leader in the subprime auto loan market, now will expand to personal loans. They have agreed to buy the lesser of $30m or 75% of Lending Club’s near-prime loans through July of next year, and $30m or 50% after that.

All about the Yale Endowment.