US stocks fell by 1.14% and international equities were off by 0.27% as trade war worries continue to rattle the markets. The Dow is on a five-week losing streak, the longest since 2011. The bond market was up by 0.35%, as demand for government paper has jumped. The 10-year yield fell to 2.327% and is back to being lower than three-month yields, creating another inverted yield curve.

Trade relations with China continue to deteriorate. Not content to freeze Huawei from international markets, the Commerce Department is now putting together a list of other Chinese companies to blacklist. All of this will create long-term harm for US businesses. Going forward, why would any international company choose to do business with a US company, all other things equal, knowing their supplies could be cut off at the whim of a US President? Meanwhile, the White House is having problems getting Congress to approve the new trade deal with Canada and Mexico. If Congress does not approve the deal, Trump could follow through on his threat to withdraw from NAFTA, which would be another heavy blow to the economy.

The IHS Markit US manufacturing PMI came in at 50.6 for May, the lowest level since September of 2009. Overall business activity growth fell to a three-year low. “Growth of business activity slowed sharply in May as trade war worries and increased uncertainty dealt a further blow to order book growth and business confidence,” said Chris Willamson, Markit’s chief business economist.

Orders for durable goods fell by 2.1% in April, and the March numbers were revised down. A drop of 25% in civilian aircraft, impacted by the grounding of the Boeing 737 MAX, impacted the numbers.

The combination of weak PMI and durable goods reports has led to lower Q2 GDP estimates. Research firm Macroeconomic Advisers dropped its Q2 estimate to 1.7% from 1.9% and the NY Fed’s Nowcast fell from 1.41% from 1.79%.

Theresa May resigned as British Prime Minister after failing to get a Brexit deal through Parliament. May will remain in office until a replacement is named. Former foreign secretary Boris Johnson is the leading candidate to replace May. Johnson is much more of a hardliner and would be more apt to make a clean break with the EU without a deal. In general, businesses fear the economic shock of a no-deal Brexit.

The Japanese economy expanded at a 2.1% rate in the first quarter, that is up from 1.6% in Q4. The 2.1% also exceeded analysts expectations, who were expecting a flat to a negative number.

We have written about the problem with excessive housing valuations in Canada and it looks like the bubble has popped, at least in Vancouver, the epicenter of the excess. Stories abound of expensive homes and condos going for discounts of 25% to 50% off assessed value or recent transaction prices. A quarterly index of prices shows Vancouver values dropping by 14.5% year over year. Land sales were down by 54% in the first quarter.

The price of copper relative to gold has dropped recently. A falling ratio has been a precursor to some market declines in the past.

You often hear how there has been no wage growth (inflation adjusted) since the 70s. But does that really make sense? Having been around since the 60s, I see way more prosperity in the US than ever before.

The White House and China, falling right in line with the trade war playbook (that has led to economic declines), exchanged tariff threats on Monday, leading to the worst daily performance since December. The S&P dropped 2.4% and the Nasdaq fell 3.4%. Beijing said they would increase levies on $60 billion in US imports and Washington responded with 25% tariffs on $300 billion in Chinese imports to start this summer. Despite a good performance on Wednesday and Thursday, the Monday drop was too much to overcome, and US stocks ended down by 0.87% and international stocks were off by 1.58%. Bonds rallied by 0.33%.

A White House decision to limit Huawei Technologies access to US markets has now ramped up the trade dispute to a much higher level. Huawei is perceived as the top technology company in China and one that the Chinese population takes pride in. Taking action against a specific Chinese company will probably lead to retaliatory action against specific US companies, maybe Apple to start. 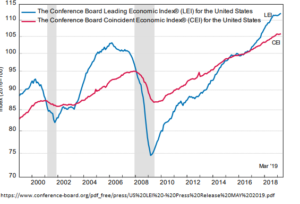 According to a Bank of America Merrill Lynch fund manager survey, 34% have purchased protection against a sharp fall in stocks over the next three months. That is the highest percentage in the survey’s history and might be a contrary indicator.

The market rally since the December 24th low had been powered by a dovish turn by the Fed and the anticipation of a trade deal with China. Well, you can take the trade deal with China off the table, at least for now, as President Trump surprised the markets on Monday by tweeting that he was going to increase tariffs because of backtracking by China in trade negotiations. That set off a rough week, with the S&P 500 falling by 2.2%. About $2 trillion in equities values vanished according to Refinitiv with the loss. Trump followed through on his promise implementing a 25% tariff on $200 billion in Chinese imports. The market did manage to finish up on Friday after being down by about 1.5% on hopes that the two countries would eventually reach a deal.

Uber turned in one of the worst IPO’s in recent memory. Closing at $41 after being priced at $45 per share. Investors are not so keen on a company that is generating $1 billion in quarterly losses.

US stocks advanced for the by 0.33% and international stocks were up by 0.56%. A strong jobs report on Friday helped the market finish in the black for the week. It was the best first four months of the year since 1999.

It was another strong jobs report as 263,000 jobs were added in April and the unemployment rate dropped to 3.6%, the lowest rate since December of 1969. Average hourly earnings were up by 3.2% year over year. On the downside, the US workforce fell in April.

Nonfarm worker productivity improved at the fastest rate since 2010, up by 2.4% year over year. Normally, productivity rises earlier in an expansion, not later, so the acceleration 10-years into the cycle is a positive sign that the economy might be able to go longer without a recession. Higher productivity also means that the economy can grow at a faster pace without kindling inflation. 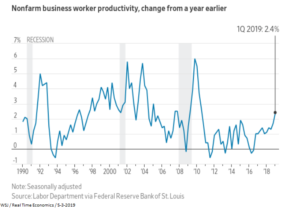 The Federal Reserve did not change interest rates at their meeting this week. Chairman Jerome Powell said, “Overall the economy continues on a healthy path, and the committee believes that the current stance of the policy is appropriate.” Core inflation was up by just 1.6% in March, lower than the 2% target. Powell said that temporary factors kept inflation lower than the target. Lower inflation would give room for the Fed to cut rates.

The Institute for Supply Management’s Purchasing Managers Index fell to 52.8 in April, the lowest reading since October of 2016. That means that manufacturing is still growing (above 50 is expansionary) but the pace of growth is slowing. The trend is down. “We’re coming down faster than I would really like,” said Timothy Fiore, chairman of the ISM’s Manufacturing Business Survey Committee. Concerns include tariffs on China and Trump’s threat to close the US-Mexico border. There is some hope that with global economic activity stabilizing, manufacturing in the US might see some improvement. 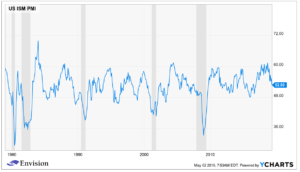 Eurozone’s GDP increased by 1.5% for the first three months of the year, up from 0.9% in Q4. That is now two consecutive quarters of improving growth. The 1.5% does not match the US rate of 3.2%, but at least it moving in the right direction. 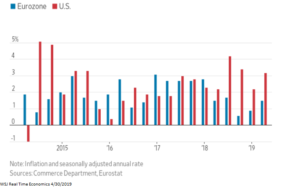 CHINA PMI IS DOWN

While the Eurozone had some positive news, that was not the case in China this week. The official manufacturing purchasing managers index fell to 50.1 in April from 50.5 in March. The number still shows expansion (above 50) but raises questions if China’s policies to stimulate growth will be effective.