A quick note this week, US stocks managed a 0.58% advance while international stocks fell by 0.38%. Stocks fell hard on Monday, almost 2%, on worried about the pending default of China Evergrande Group, the big Chinese property developer. They are on hook for about $300 billion.

But by Wednesday stocks were back in rally mode and close out the week with three consecutive advances.

During the week the Fed said it would begin to slow down on its bond buying program, but that was expected, at least to the stock market. Bond yields jumped by 10 basis points on the 10-year.

The market fell again this week, although not much, down by 0.45% in the US and 1.18% outside the US. High valuations, an economy that is still growing but slower than originally thought, inflation, proposed tax increases, and tapering around the corner have stalled the market out, at least for now. In what might be an ominous sign, the market did not hold support as we wrote about last week. Now stocks certainly didn’t collapse, but they finished the week just under the mid-August highs.

One problem is that producer prices (purple line below) have been rising much faster than consumer prices (orange line below), meaning that companies have not been able to pass on the rise in recent cost inputs. Should the higher inflation numbers turn out to be “temporary” than maybe the impact won’t be that bad, but if not, it will impact profits and growth. 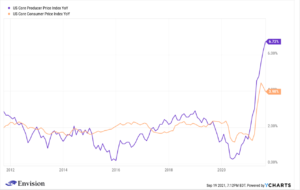 Another issue is Evergrande, the huge Chinese property developer. With $300 billion in debt, the company is on the brink of default. For now, the Chinese government is playing hardball and has not indicated it will provide financial help, so there is the threat of a spillover into world financial markets.

US stocks were down by 1.83% and international equities were off by 0.80% for the week. Stocks closed at the low on Friday and are resting right on the support level from mid-August.

Damage from the Delta variant is starting to show up in the economy. Offices are delaying opening, businesses are pulling back on travel, and spend-happy consumers are slowing down. Hiring in August came in way less than expectations, and the University of Michigan consumer sentiment poll taken in late August fell to the lowest level in a decade.

The Atlanta Fed’s GDPNow model is currently estimating 3.7% growth down from 5.3% at the start of the month. Over the last week, economists across the board have cut their growth forecasts.

Delta gets most of the blame, but the ending of government aid also plays a part. A recent Census Bureau survey shows that 41% of households said they used some form of government assistance to  help with everyday expenses.

At the same time that economists were cutting estimates, some analysts are becoming cautious on US equities. Bank of America is projecting 4260, that is 4.7% below the Friday close, and 4600 at the end of next year, up 3% for next year. Morgan Stanley moved US stocks to “underweight” with a preference for Japan and Europe, and an overweight in cash. “Morgan Stanley strategists forecast cash to outperform U.S. equities, government bonds and credit over the next 12 month”, said a note from the firm.

August jobs were up by 235,000 but that was dramatically below the 750,000 estimate, but the stock market didn’t care. The market will turn every piece of news, good or bad, into a reason to for stocks to go higher. However, the the Initial Jobless Claims report was good. Ithit a new pandemic low coming in at 340,000 for the week ending August 28th.

August closed out on Tuesday and stocks were up for the 7th straight month, the S&P was up by 2.4% while the Nasdaq increased by 4% for the month.

At least one area of irrational exuberance has cooled off. The SPAC market has lost $75 billion in market cap over the last six months. That is about 25% of the combined value of the 137 SPACs that merged by mid-February. During that same period, IPOs that came public were off about 12% while the Dow Jones Industrial Average was up 13%.

Home prices continued to hit records. The S&P CoreLogic Case-Shiller National Home Price Index rose 18.6% year over year in June, up from 16.8% the prior month, and the highest annual rate since the index began in 1987.

West Virginia Senator Joe Manchin wrote a good common-sense editorial on “Why I Won’t Support Another $3.5 trillion“. Manchin sites the risk of inflation, runaway debt, the future unknowns of the pandemic, the problems with artificial deadlines, and the impact on future generations.” Lets see if it makes any difference.