The Fed did not lift rates this week and that moved the markets higher. The US equity markets were up 1.40% and international markets were up 2.90%. The US dollar declined 0.72% and oil rallied by 4.28%. The Fed made it clear that the pace of interest rate increases would be very deliberate and carefully considered. That helped bonds, which rallied by 0.38%. However, the Fed is probably leaning towards a December increase. Assuming nothing crazy with the economy between now and then, we believe a slow and measured pace of interest rate increases would be beneficial for the economy in order to put it back into a historical balance.

The Atlanta Fed’s GDPNow declined to 2.90% from 3.0% due to a drop on the forecast for third-quarter real consumer spending growth ticked down by 0.10%.The NY Fed’s Nowcast forecasts took a big hit. Both Q3 and Q4 declined by 1/2% to 2.30% and 1.20%, respectively. The largest negative contributions came from manufacturing, retail sales, and housing and construction data.

Initial claims for unemployment fell by 8k to 252k. It was one of the lowest numbers since 1973 and indicates a tightening labor market.

According to FactSet, earnings will decline for the sixth straight quarter, the longest streak since 2008. The losing streak was expected to end this quarter but that likely won’t happen. Analysts now expect earnings to finally improve in Q4.

There seems to be a worldwide movement beginning to utilize fiscal stimulus to get economies moving. Canadian Prime Minister Justin Trudeau has a $46b 10-year infrastructure plan. Japan has a $45b plan. There is similar talk elsewhere around the world and both Clinton and Trump favor new fiscal stimulus. The consequences are unknown, but someone will have to pay or finance this spending. In the US, higher inflation and a lower dollar might result, but the plan could put an end the earnings recession cited above.

The markets have been on an up and down ride recently. A week ago Friday, on fear of higher interest rates, the SPY (SP500 ETF) fell 2.4%. Another Fed official said on Monday that rates were probably not going anywhere in September, so the market rallied 1.44%, only to fall another 1.44% on Tuesday. Wednesday was down slightly, but on Thursday the market went up by almost 1%, and then fell on Friday to end the week just about even. For now, the SPY has found a floor in the 212.30 area. The Fed meets on Tuesday and Wednesday and you can be assured that will be closely watched. 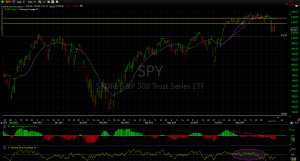 For the month, treasury rates have been flat at the short-end but have increased by 12 basis points on the 10-year and 21 basis points on the 30-year, indicating a steeper yield curve. The same has been true around the world. Usually, a steepening curve is indicative of a growing economy, higher inflation or more aggressive central bank action. The market might be pricing in much higher deficits due to a large dose of fiscal stimulus under the new administration (no matter Trump or Clinton).

A steepening yield curve often will lead to lower returns for “bond proxies” like utilities and REITS and higher returns for banks. A few weeks is not a long-term trend, but it is something to watch. 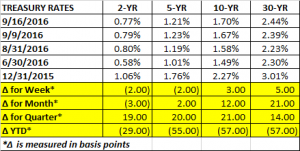 The Atlanta Fed’s GDPNow estimates Q3 growth at 3.0%. That is down from 3.3% last week. The drop was due to a decline in the estimate for real consumer spending growth and real government spending growth for Q3. The NY Fed NowCast remained unchanged at 2.8%.

Jobless claims continued at their remarkably low rate, coming in at 260k for the week. Retail sales fell 0.3% in August. It was the first decline in six months. Year over year retail sales are up 2.4%.

ODDS OF A TRUMP WIN

The odds continue to increase for a Trump win in November. As the odds increase, so does the level of economic uncertainty and markets do not like uncertainty. No matter your belief on if Trump will be good or bad, his proposed policies definitely increase the uncertainty level for the economy and that is probably being reflected in recent market volatility. The latest Betfair numbers put the odds of a Trump win at about 34%. 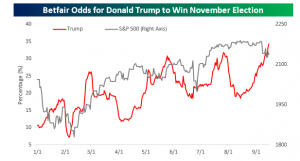 Equity markets in the US fell about 2.35% with most of the damage coming on Friday. The previous Friday the market rallied on a weaker payroll hiring number, which the market figured was good news in the sense that it might delay an interest rate hike. This Friday, the market fell hard when Boston Fed President Eric Rosengreen said that there is a “reasonable case” for a gradual rise in interest rates. A nuclear test in North Korea didn’t help. In addition, the European Central Bank declined to add more stimulus to the system.

The selloff is still minor at this point but there might be more. Two weeks back we wrote that “a prolonged period of low volatility, a negative divergence of price performance versus technical indicators, price action that is slowly rolling over, and a calendar period that sometimes, historically, has been unkind to stocks, might be a hint that these is a possibility of a small to modest sell off here.” There are some analysts calling for a more severe sell off. 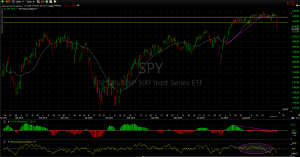 With the election getting closer and the race apparently getting tighter, that is another reason for more volatility in the market.

Treasury rates did increase last week, but they barely moved on the short end of the curve and increased more on the long end of the curve. The curve got steeper, which is usually more indicative of a healthy economy, not one bordering on recession. 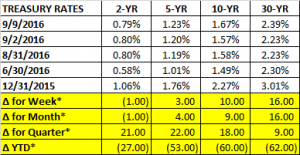 The Atlanta Fed’s GDPNow estimate for Q3 growth declined to 3.3% from 3.5%. Lower forecasts for real consumer spending and real equipment investment growth helped drive the estimate lower. The NY Fed’s NowCast Q3 estimate remained steady at 2.8%, but the Q4 estimate declined to 1.70% from 2.0%. 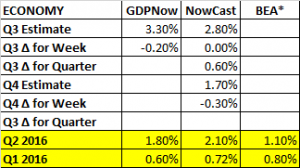 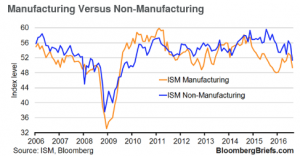 Payroll reports continue strong. Initial jobless claims fell by 4k to 259k. The four week average of 261k is lower than the 12-month average of 268k. A year ago the average was 277k.

As shown further above, the current GDP estimates for Q3 and Q4 are showing higher growth in the back half of the year as compared to the first half.

Stocks moved up this week as a lower than expected payroll hiring number decreased the chance of a September rate hike. In the sometimes upside down world of stock market logic, that was considered good news. 150k jobs were added in August. The consensus was for 180k. Wages increased only by 0.1% and the average work week was slightly smaller.

Congress is working on a plan to fairly tax sales across state lines. Basically since the inception of the internet, most sales that have crossed state lines have effectively been tax exempt. This has had a devastating impact on local retailers, as they were put at a huge price disadvantage against internet retailers like Amazon. And this disadvantage has been going on for years at this point. While it has helped internet based businesses, it has unfairly hurt retailers that provide more local employment and that are a major source of small business formation. The proposal, while not ideal, is a step in the right direction and would tax according to the tax base of the retailer at a tax rate chosen by the consumer’s home state. So what does that mean in English? If a business in Ohio ships product X to Maryland, they would use Ohio’s rules for taxing item X and the tax rate that would apply would be from Maryland.  The main objective should be to make it so that local business is not put at a disadvantage to internet based businesses.

Oil prices may be up but they are still way down from a couple years back and the big oil firms are trying to adjust. They have been avoiding dividend cuts but time may not be on their side. BP, Shell, Exxon and Chevron could not cover their dividends in the first half of 2016 to the tune of $40 billion. They companies have been adding debt to help make up for the shortfall.

We are a little off topic here, but Bret Stephens penned the above titled commentary in the Tuesday WSJ. Professor Bernard Lewis once wrote that when a nation is faced with adversity, there are two ways to respond. One, you can ask, “Who did this to us?” That question essentially leads to blaming all of your problems on others, to dig up conspiracy theories, and to avoid the real issues. And all of that leads to avoiding the real issues and further decline in the society.

Or, a society can ask this question, “What did we do wrong?” That leads to taking personal responsibility, understanding the real question and figuring out possible answers. Those societies have flourished and that has been the path that the United States has normally taken. But today, both political parties have been taking the route of blaming someone else for our “problems”. We really need to ask the correct question and work on real solutions.