However, in periods when stocks did trade above the 1-standard deviation marker after not having done so in the previous year, forward returns were good. 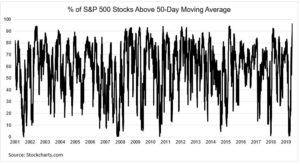 The economy is beginning to turn, although it is still at extremely low levels. The number of travelers passing through the Transportation Security Administration screening on April 14 was 87,534. On May 24, it has increased to 267,541, which is still down 87% from a year prior but up by about 3x since April 14. Truckloads are also up. “We’re seeing some positive signals in household spending, in the real estate market, and in the stock market. But I don’t think we can predict whether those are going to continue and this is going to be a V-shaped recovery or this is going to be a sustained, prolonged depression. Really, the answer to that is going to come from the health situation,” said University of Chicago economist Constantine Yannelis.

There have been more than 40-million jobless claims since the pandemic started, but continuing claims for unemployment fell by about 4-million for the week ending May 15. The Fed’s Beige Book reports that employers are having a hard time hiring people, as many are being paid more by the government to be unemployed than they could make working. Consumer spending dropped by a record 13.6% in April, while personal income increased by 10.5%, do to all of the Federal support programs.

It was another big week for stocks as the overall US market jumped by 3.78% and international equities were up 2.78%. On Monday stocks were up by 3.31% after getting a double-barreled boost from Fed Chair Jerome Powell and then vaccine maker Moderna. During a 60 Minutes interview on Sunday, Powell said “There’s really no limit to what we can do.” Then, on Monday morning, Moderna reported that the early results from its coronavirus vaccine, given in March to eight volunteers, appear successful. The shots were safe and well-tolerated and boosted antibodies to levels similar to people who had recovered from Covid-19.

While the market has had an incredible comeback rally, the market is not out of the woods yet. The VTI sits just under the 200-day moving average. Rallies sometimes falter at that spot.

The US economy is starting to reopen. Staying indoors is switching to going outdoors. While toilet paper was the hot commodity early on, now bicycles are riding off the shelves. You can’t find one at Wal Mart or the other big retailers.

The big retailers are doing more than just selling bicycles, they are turning into the winners at the further expense of small businesses across the country. Wal-Mart posted better than expected results. Target’s Q1 digital “comparable sales” increased by 41%. Both Lowe’s and Home Depot had an 80% increase in e-commerce sales.

But retailers like JC Penny, which never established a strong online presence, are in trouble. JCP filed for bankruptcy last week and plans to close 240 of its stores or about 30%. JCP joins Neiman Marcus and J. Crew in Chapter 11.

US and international stocks both fell by about 2.5% and the bond market was up by 0.50%. The overall US stock market as measured by the VTI has now traded in a range between 137.5 and 147.5 since April 9.

The economy continues to tailspin but maybe we hit bottom. We emphasize the word “maybe” as it is certainly too early to say that, but a preliminary reading of the University of Michigan Consumer Confidence ticked up. The Empire State Manufacturing Index came in at -48.5, but that was up from -78.2 in the prior month, and above the expected -63.5. Mortgage applications have increased for the fourth straight week. Let’s remember the absolute level of these indexes is dismally low. And there was still plenty of terrible economic news.

Retail sales were down by a seasonally adjusted 16.4% from a month earlier. It was the biggest drop since the early 1990s. Manufacturing output dropped by 13.7% in April, the largest monthly decline since 1919. Three million more people applied for jobless benefits. The 8-week tally totals 36.5 million unemployed.

Then, to make matter worse, the US decided this was a good time to ramp up the trade war with China, by disallowing Huawei Technologies access to semiconductors that use US technology. That led to speculation that China would retaliate against big US tech companies like Qualcomm, Cisco, or Apple.

Let’s not forget that a trade war that was ramped up in the midst of recession helped turn the 1930s into the Great Depression. Let’s hope for a better outcome this time.

Unemployment spiked to 14.7% in April as 20.5 million workers lost their jobs. 10-years of job gains were wiped out during the month. Meanwhile, the stock market continues to take an optimistic view as US stocks rose by 3.99% and international stocks were up by 3.02%. The NASDAQ composite turned positive for the year. Bonds fell by 0.35%.

A good portion of why the market is going up when the economy is going down is driven by the outperformance of a few big tech companies like Microsoft, Apple, Amazon, Alphabet, and Facebook. Investors also have already written 2020 off and are looking at 2021 and beyond. Also, companies have been able to raise a lot of capital by the Fed backstopping the bond markets. The Fed’s balance sheet has expanded by $2.4 trillion over the last eight weeks. And the yield on the S&P 500 is 2.07% versus a 10-year treasury yield of 0.69%.

Stocks were down slightly, the S&P 500 dropped by 0.21%. Q1 GDP fell by a 4.8% annualized rate in Q1, the biggest drop since 2008. Q2 is on target for a 40% annualized drop. The market rallied at the beginning of the week as some states began to reopen and was helped further midweek when it was announced that the Gilead drug, remdesivir, shortened recovery times for some patients by about 1/3. There has begun a major push to have a vaccine by the end of the year. As the week ended, stocks fell hard as the big tech stocks showed that they are even impacted by the virus. Amazon has record sales but higher virus-related costs increased expenses. Apple didn’t post guidance for the first time since 2003.