US stocks were down by about 1/2% and international stocks fell by 0.83%. Bonds were up 0.06%. Crude continued to spike higher, up 3.49% for the week and almost 5% for the month. Oil prices are expected to continue to rise as sanctions on Iranian oil begin to start in November.

The Fed, as expected, raised interest rates by 1/4%. It was the eight increase since 2015. A trade deal was signed with South Korea and a final deal with Canada is supposedly close. But trade problems with China persist and that will feed into higher prices here in the US as supply chains are interrupted and become less efficient.

Tesla agreed to a $40 million dollar settlement with the SEC to settle fraud charges from Elon Musk’s tweet that he had an offer to take the company private. Tesla will have to bring in an independent chairman to replace Musk and add two independent directors and put controls on Musk’s communications.

Trump signed a free-trade agreement with South Korea. It was the first signed agreement by Trump that will help to open markets rather than close them.

Here is a statistic that points to those that argues that equities are way overvalued. In Q2, the value of equities jumped over real estate for the biggest share of household wealth according to Steve Blitz of TS Lombard. The last time that happened was during the dot-com era.

It was painful to watch, but Supreme Court nominee Brett Kavanaugh and Dr. Christine Ford faced off in Senate testimony on Ford’s accusations that Kavanaugh attempted to rape her in high school. The episode had little impact on the markets but was a prime example of the divide in this country between the two parties.

US stocks advanced by 0.59% despite the trade war being ramped up another notch. International stocks jumped, +2.63%, helped by a falling dollar, which declined by 0.55%. Interest rates were up across the board, and the spread between the 10 and 2-year treasury increased by 5 basis points to 26. The 10-year note broke through the 3% barrier and is yielding 3.07%.

Trump upped the ante in the trade war battle by implementing the tariffs on $200 billion of Chinese products that he had previously threatened. The tariffs start at 10% and then go up to 25% by year-end. China responded with $60 billion. Trump then said he would hit back with another $267 billion. When economists talk about how trade wars start and turn from something small into something big, this is the playbook. And Trump and his Chinese counterpart are playing their parts perfectly. Should Trump go all the way with the tariffs as described, Oxford Economics is forecasting a 1% hit to GDP. Expected growth next year per the Federal Reserve is about 2.4% (before the trade war). 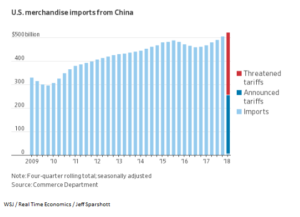 The US is right in that China does not trade fair regarding technology transfer and intellectual property. Trump’s obsession with China’s trade surplus is wrong. The administration also has not laid out exactly what they want, leading some to believe that Trump really does not want a deal, and the tariffs are more about hurting China than trying to build a better economy.

Chinese company Alibaba said they would not add a million US jobs they had promised at an earlier point.

Trump’s hardline approach may or may not ultimately work, but in the meantime, as the tariffs eventually work their way through the economy, businesses and employees will suffer, inflation will increase, and growth will either slow or decline.

Randall Forsyth writes in his weekly “Up & Down Wall Street” column in Barron’s that Stephanie Pomboy of MacroMavens has been warning about corporate debt. Corporate interest expense is at a record, even while interest rates are still relatively low. But given the excessive debt burden, companies will be cutting back borrowing by 14.6%, compared to the prior year, an indication that slowly increasing interest rates are causing pain. Pomboy argues that equities have been rising with global central bank stimulus for years now, and when that ends early next year, interest rates will rise further, cutting into corporate profits, and the fuel that has driven this long rally will be spent.

US stocks ended up 1.14% on good economic reports.  Equities were also helped by emerging markets, which were up by 0.70%, calming fears, at least for now, of a never-ending fall that would drag down US stocks. International stocks increased by 1.52%. Technology had a good week, up 1.8%. Apple released its new line up of products and shares increased by 1.1%.

Retail sales were up by 0.1% in August, showing some recent moderation in growth. But year over year, sales are up by 6.5%, the most since December of 2011.

The University of Michigan Consumer Sentiment Index reported its second-highest reading since January of 2004, at 100.8.

Barron’s cover story this week was on U.S. debt. We have written and spoken about this many times in the past. The deficit is one of those things that is not a problem until it becomes a problem. And when that happens, it is not going to be pretty. At some future point, investors are not going to want to finance U.S. debt. And then interest rates will skyrocket, or the Fed will have to print dollars, and the dollar will depreciate.

America currently owes $15.7 trillion, which is 78% of the gross domestic product (GDP). The Congressional Budget Office (CBO) estimates that in a decade debt will be $28.7 trillion, or 96% of GDP. And that assumes no catch up in infrastructure, no financial crisis, and no wars. It is one thing if debt increases in line with GDP growth. But that is not the projection. The CBO estimates nominal GDP growth at 4% and debt to rise at 4.9% over the next 10-years.

Neither political party has any interest in addressing this serious issue.

For the first half of the year, stock buybacks made up the largest percentage of cash spending by companies in the S&P 500. Buybacks were up by 48% and totaled $384 billion during that period. Capital spending increased by 19% to $341 billion.

For all the talk of tariffs and a trade war, so far to date, they have yet to be implemented in mass. Currently, tariffs on imports effect about $113 billion in goods. That is 4% of all US exports. About $70 billion has been implemented on US exports or about 3% of the total. Trump has threatened tariffs on another $700 billion of imports.

Markets around the world fell. US stocks were down by 1% and international stocks fell by 3%. Emerging markets equities entered a bear market (see below) and there is fear of contagion. Bonds fell by 0.35% on a rise in interest rates. The US economy continues to show strength.

The NASDAQ, composed primarily of technology stocks, dropped 2.6%, its worst performance since March. Social media stocks were under the spotlight as they returned to testify in front of Congress about foreign influence on elections. The Department of Justice said it would look into the “stifling” of voices on social media. Semiconductor stocks dropped on lower earnings expectations. Stocks were hurt further on Friday when Trump said that an additional $267 billion in tariffs on China, on top of what was previously announced, is now on the table. Tesla dropped by 6% to $263 when Elon Musk was shown smoking marijuana in an interview.

Nonfarm payrolls increased by 201,000 in August and private-sector wages increased by 2.9% year over year. The unemployment rate remained unchanged at 3.9%. The 2.9% increase in the wage rate was the highest of this expansion. While that is good for workers, it could cut into corporate profit margins and give the Fed more leeway to increase interest rates.

The ISM Manufacturing Index jumped higher in August to 61.3, up from 58.1. That is the highest level since May of 2004 and indicates strong growth ahead. However, according to the ISM report, “Respondents are again overwhelmingly concerned about tariff-related activity, including how reciprocal tariffs will impact company revenue and current manufacturing locations.” 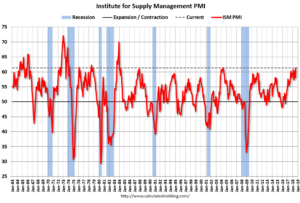 The Global Manufacturing PMI fell by 0.3 points in August to 52.5. It was the seventh drop in eight months. But the index still remains in expansionary mode (greater than 50) for the 30th consecutive month. Developed markets, led by Europe turned in better numbers than the emerging markets.

The Philly Fed State Leading Indexes project growth in 49 states over the next six months, however, growth rates are expected to moderate.

The Goldman-Sachs Bull-Bear Indicator, which relies on five market factors, is flashing its strongest warning signal since the 1970s. High stock market valuations and a tight labor market are two of these key factors. However, Goldman is not anticipating a deep bear market, but they are forecasting lower returns ahead. Moderating factors include a low-interest rate environment, subdued inflation, and an accommodative monetary policy around the world. 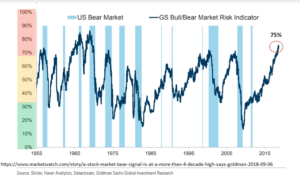 Emerging markets dipped into bear market territory on Thursday. The MSCI Emerging Markets index is now off just more than 20%. A fall of 20% or more is considered a bear market. A rising dollar, trade tensions, and falling commodity prices shoulder most of the blame. The rising dollar makes it more difficult for countries with debt denominated in the US currency to repay their loans. Rising trade tensions could put a damper on global trade that some emerging market countries count on, as well as lead to an economic slowdown. Raw-material prices are down about 10% since the May peak. Emerging market countries like Brazil, Chile, and Indonesia are major commodity exporters.

Bob Woodward’s new book, “Fear”, was published and paints a portrait of a dysfunctional White House. And the NY Time published an op-ed by an anonymous author who is supposedly a senior official in the White House. The piece says that there is a group operating to control the worst instincts of Trump and to basically act as the adults in the room.

Stocks were up for the week but down on Friday on worries that Trump was planning to go forward with more tariffs on Chinese imports and on reports that the US and Canada were not able to reach a trade deal as hoped for.

A strong economy coupled with strong profits has been the main driver behind this market. The GDPNow model from the Atlanta Fed is projecting Q3 growth at 4.1%, Macroeconomic Advisors is at 3.1% and the NY Fed’s Nowcast is at 1.98%. Meanwhile, corporate profit projections continue to improve for 2018, 2019 and 2020. They are up by 0.67%, 1.29% and 0.69% from 13 weeks ago (one-quarter of the year). However, the rate of change has been falling in recent weeks.

The US and Mexico came to terms on an updated NAFTA agreement. The agreement would lessen dispute resolution measures and would require higher paying jobs in auto-factories. The focus then turned to wrap up a deal with Canada by Friday but that did not happen.

Something of interest, which might be nothing, is that the volatility index (VIX), often called the fear index, rose this week in tandem with stocks. Normally, there is a negative correlation. When stocks go up, the VIX normally goes down, and the opposite. But recently there has been a positive correlation. The last time that happened was right before the correction we had earlier this year. This correlation has sometimes occurred before previous sell-offs as well as shown below. 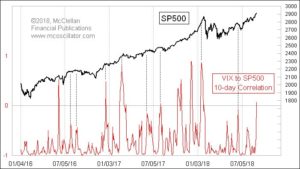 New research based on the yield curve from the San Francisco Fed shows that the risk of a recession is rising but a downturn is far from certain. As the difference between short and long-term Treasury’s narrows, there is growing likelihood that the curve will invert, meaning that short-term rates will yield more than long-term rates. While the two and ten-year Treasury’s are most commonly discussed when determining yield curves, the San Francisco Fed says that the difference between the 10-year and the three-month bill is the more useful indicator. While the 2-10 spread is tight at 24 basis points, the difference between the three-month and ten-year is much wider, at 75 basis points.