US equities were roughly flat on the week which was quite a feat since market leaders Amazon and Google fell after they released earnings. Amazon dropped 0.6% and Google 3.6%. The market was helped by some old-time blue chips like Caterpillar (+7.04%), and Boeing (+13.7%). Caterpillar, which is a good gauge of global growth, raised its outlook for the year.

The VIX, a measure of volatility that is often called the fear index, fell to its lowest level ever on Tuesday. The current “fear” is that when volatility does break out, so many traders are short volatility related instruments, that the short covering will explode the VIX to the upside and take equities with it (but in a negative direction). However, the VIX has been declining for years now and this is not a new argument, although the all-time low is new.

Real GDP increased by 2.6% in Q2, up from 1.2% in Q1 and better than than 1.40% in Q2 of 2016. Consumer and government expenditures were up, capex growth moderated and residential fixed investment was down. 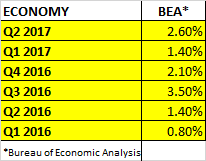 The Fed announces that it will begin to unwind its balance sheet “relatively soon.” In FedSpeak, that normally means within a month or two. The unwinding process will be a slow, gradual affair that might not finish for about five years, assuming no recession.

IS INFLATION OUT THERE, SOMEWHERE?

Inflation is supposedly under control as we constantly hear that the Fed can’t reach their two percent inflation target. But numerous industrial companies, including Ingersoll-Rand, Lennox and United Technologies have been citing high commodity prices and cost pressures. Oil was up 8.6% this past week. Copper is up 14% so far this year and is at its highest level since May of 2015. The labor market also appears tight. One must wonder if there is inflation is beginning to brew just under the surface.

WASHINGTON GOES FROM BAD TO WORSE

Things have gone from bad to worse in Washington. North Korea shot off another ballistic missile that experts said could reach Chicago. Some very hard decisions have to be made and possibly soon. The conventional wisdom is that tighter economic sanctions and more political pressure are the way to go, but that hasn’t worked with North Korea in the past. Trump’s patience with China is beginning to wear thin, and his natural inclination to brand China as a trade manipulator can now come conveniently into play as an offset of the North Korea problem.

Newly installed White House Communications Director Anthony Scaramucci, brought on-board after the press secretary Sean Spicer left last week, gave an interview with the New Yorker magazine filled with profanity and went after Chief of Staff Reince Priebus and others. Scaramucci was impressive at his initial press conference and seemed like a solid and sane addition, until the interview.

Later in the week, Trump fired Priebus and replaced him with Home Security Secretary and former Marine general John Kelly. Hopefully Kelly can get the White House under control.

The Republican’s attempt to repair/replace the US healthcare system failed again. When you have a slim majority with just 52 Senators, and you are not interested in working with the Democrats (as the Democrats routinely would do with the Republicans in years past), you need to be close to perfect to pass legislation and the Republicans came up short. Maybe it is time for a radical (old-fashioned) approach as Senator McCain alluded to in his dramatic speech earlier this week, try to work together, Republicans and Democrats to come up with a solution that moves the debate and policy to the center.

One bipartisan effort that did succeed was the passing of sanctions on Russia, despite White House objections. The bill passed 419-3 in the House and 98-2 in the Senate.

The truth is, Trump has turned out to be what so many feared during the campaign. In Saturday’s Wall Street Journal, Peggy Noonan writes “He’s not strong and self-controlled, not cool and tough, not low-key and determined; he’s whiny, weepy, and self-pitying. He throws himself, sobbing, on the body politic. He’s a drama queen.”

Trump does have some good economic ideas, and he brought on some excellent advisers, but all his side acts and his crazy behavior are making it impossible to make real progress. He needs to get off Twitter, stop talking and start leading like a normal President. 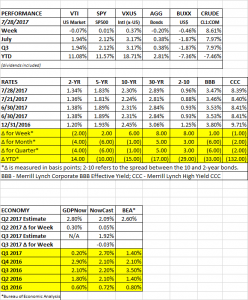 Transcript of a PBS interview with market historian Peter Bernstein, from the 1990s. Click here.

The markets have been helped by strong earnings, which in turn have been helped by a lower dollar. The dollar is now down about 7% on the year. A lower dollar provides a tailwind to earnings. According to Dubravko Lakos-Gujas from JP Morgan, S&P500 earnings increase by about 1% for every 2% decline in the dollar. Overall, 19% of S&P 500 companies have reported earnings this quarter, and they have come in 7.8% above estimates (per FactSet).

Interest rates generally declined but at the short-end of the curve, they increased. The 5, 10 and 30 year bonds all had lower yields. But the two-year was up by 1 basis point and the 3-month yield increased by 12 basis points. Bond investors are worried about the up-coming battle over the debt ceiling, probably sometime in October, 3-months away.

While the market continues to advance, the political environment continues to deteriorate. Special Counsel Robert Mueller expanded his investigation into Trump’s Russia connections, including historical personal transactions. White House Press Secretary Sean Spicer resigned and Trump criticized his attorney general. The Republicans cannot pass a healthcare bill and cannot even figure out how to take a vote on one. That was just this week.

The Conference Board’s Leading Economic Index was up by the most since December of 2014, increasing 0.6%. A strong report on building permits led the way. 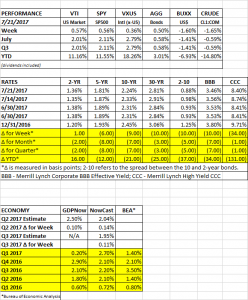 Leaving your employer? Click here for a video on your different options.

The market broke out to another high, continuing the stair-step pattern of consolidation, then another step higher. Fed Chair Janet Yellen testified before Congress and emphasized that rate hikes would be very deliberate and moderate. The market took that as good news and shot equities higher.

Investors now view the probability of another interest rate hike this year as less likely. Yellen’s testimony, coupled with less than sanguine economic reports, makes it more likely that a September hike is off the table and lowers the probability of a December increase. 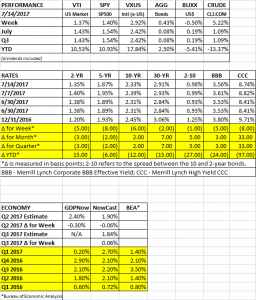 US equity markets were basically even, +0.06% while international markets fell by almost 1/2%. Bonds declined as interest rates continued to rise and the yield curve steepened. The dollar was up and crude was down.

Over the last couple of weeks, consensus has tilted back towards higher rates going forward. Minutes released from the June Federal Reserve meeting showed that members want to begin reducing the balance sheet before year-end. And European Central Bank minutes indicate that there were discussions of ending their pledge to buy bonds if the economy weakened. Depending upon the rate of increase, higher interest rates at some point would likely put pressure on equities. The interplay between higher earnings and interest rate will have a lot to do to determine the direction of the equity markets. 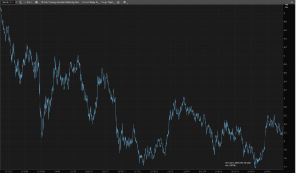 The June employment report came in strong. Non-farm payrolls increased by 222,000 and the two prior months were revised higher by 47,000. The unemployment rate increased to 4.4% from 4.3% due to more entries into the workforce, which is considered a positive sign. The average workweek rose by 0.1 hours to 34.50 and average hourly earnings were 2.50% higher year over year. 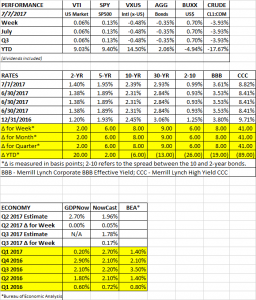 US equity markets were down by about 1/2% while international markets managed a 0.19% advance. The dollar fell and crude rallied by 7%.

Interest rates rose. The yield curve got steeper. The 10-year rose by 16 basis points. Central bankers are beginning to align themselves on the path to higher rates. The Fed has been increasing rates and have signaled more is on the way, as well as laying out the plan to reduce their bond holdings. But now some central bankers overseas might be joining the party. Mario Draghi of the ECB suggested that the bank might be close to ending its bond buying. And Mark Carney of the Bank of England suggested that a rate hike might be on the way.

As the quarter ended, analysts are forecasting Q2 earnings of $31.50, down from $32.13, according to FactSet. The 2% decline is lower than the drop-in forecasts in prior quarters, which have averaged 5.9% over the last 10 years.

Q1 GDP was revised up to 1.4% from 1.2%. The original estimate for Q1 real growth was 0.7%, and that was later revised up to 1.2%. GDP growth has picked up in Q2, the Atlanta Fed’s GDPNow model currently has Q2 growth at 2.7%. The first official estimate from the Commerce Department will be released on July 28.

The current economic expansion began in July of 2009 and is currently the third longest on record, surpassed only by expansions in the 1960s and the 1990s. However, the growth rate during this expansion has been sub-par, probably due to lower productivity and a decline in the labor force. 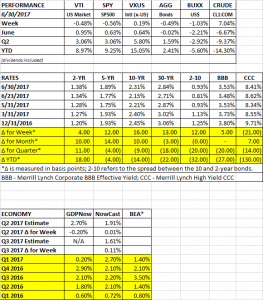