The Republicans could not put together sufficient support to pass the American Healthcare Act, thereby leaving Obamacare in place for the at least the near future. The uncertainty of the legislation passing and the possible negative implications for policy proposals that have energized the market since November, made for a rocky week, at least by recent standards. Equities dropped by over 1% on Tuesday, the first time in 160 days the market fell by more than 1%. For the week, US equities were down about 1.4%.

With the ACHA out of the way for the time being, tax reform becomes front and center. That, along with deregulation and repatriation are really tops on investor’s agenda and that is the fuel that has propelled a lot of this market rally. If the healthcare debacle foreshadows potential problems with Trump’s more business oriented proposals, the justification for a good portion of the recent really will come into question, thereby threatening values.

Higher expected earnings has also helped the rally. For Q1, the estimated earnings growth rate, according to FactSet, is a whopping 9.1%. If it happens, that would be the highest year over year increase since Q4 of 2011 when earnings jumped by 11.6%. Much of that increase will be due to the energy sector, where the average price of oil is 50% higher than a year ago. Excluding energy, earnings estimates are for a 5.2% advance. 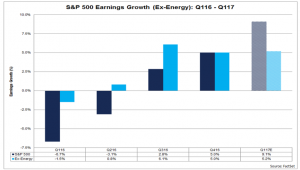 New home rose 6.1% in February. The sales rate is now at its highest level since August of 2008 on a 12-month average basis, a positive sign for the housing market.

Initial claims for unemployment rose 15,000 to 258,000. Still at a historically low level but up from recent weeks.

The Atlanta Fed’s GDPNow model is forecasting growth of only 1% in Q1. This contrasts with the NY Fed’s Nowcast that currently forecast Q1 growth of 3.0%.

The equity markets fell last week, dropping 0.58% in the US, but international equities were about at break even. Bonds were also down by 0.58% as interest rates continued to rise.

The price of oil fell below $50 for the first time since November as inventories increased to record levels. More negative movement on the oil price is likely to have a spillover effect on the equity and high-yield markets. Oil had rallied in the last several months on news of OPEC production cutbacks. But US shale producers have moved quickly to cash in on the higher prices. That has increased supply in the US at a faster rate than demand. However, demand around the world is increasing and US exports of oil and gas should also increase as time goes on, and that should alleviate some of the excess supply.

Insider buying has fallen to a 29-year low. There were 279 insider buys in January, the lowest number since 1988. The ratio of buyers to sellers in February also hits its lowest level since 1988. 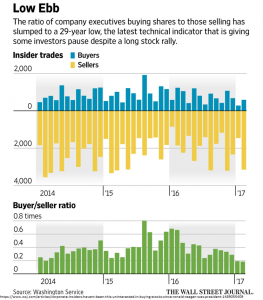 As we have stated many times, the biggest threat to the economy is a possible trade war. Trump’s protectionist leanings are misguided and the “facts” that he relies upon are sometimes wrong. If he misplays his hand and new policies or taxes invite trade retaliation, the result will be less growth or possibly negative growth. German Chancellor Angela Merkel will be talking to Trump about that at their upcoming meeting on Tuesday, according to Der Spiegel magazine. The Spiegel article says that documents provided to Merkel label a US border-adjustment tax as a “protective tariff” and in violation of World Trade Organization rules. Responses from Germany could include higher duties on US imports, or setting up their own “border-tax” for US companies alone. Merkel also plans to call on Europe to pursue trade deals with other countries, to take advantage of the void that the US is no longer filling.

Economic news has been much improved in Europe recently, and their equity market trades in line with historic norms, but there is some major political uncertainty. Here is a look at what is coming up:

The Freedom Party, an anti-EU and anti-immigrant party leads in the polls but is losing ground. The political system would make it difficult to turn that lead into a political majority. The Freedom Party would have to form a coalition with others, that would likely be difficult.

The break from the EU won’t be so clean. Britain must trigger Article 50 to open up a two-year window for Brexit negotiations, but political infighting is delaying the implementation of Article 50. The transition period will mean more uncertainty for Britain.

Marine Le Pen is the leader of the National Front, an anti-EU and ant-immigrant party. The majority of French view the EU unfavorably. Le Pen is expected to advance to the second-round election, where polls show her losing by a wide margin. Her likely opponent, Emmanuel Macon, has been short on details but is running on a pro-EU and pro-business agenda.

Recent polls show a close race between the center-right party (CDU) and the center-left (SPD). Merkel leads the CDU. If the SPD wins, they could form a coalition with left-wing parties.

Thursday marked the 8th birthday of this bull market. The market hit its low on March 9th, 2009 and that set off this 8-year run. The market has not had a 20% pullback since (20% is often defined as a bear market). That is the second longest stretch of all time, only the 1987 to 2000 market went longer without a bear market.

The Fed has made it pretty clear in recent weeks that a March rate hike is likely. The question now shifts to how many hikes in 2017, will it be two or three? Fed voters seem split between two and three. Fed Governor Tarullo resigned effective in April, and he was likely in the two-vote camp. That would tilt the sentiment to three likely rate increases in 2017 (at this time). The latest jobs information (below) also would lean expectations to three hikes in 2017 as of now.

Nonfarm payrolls increased by a solid 235k in February. The unemployment rate fell to 4.7%. Average hourly earnings increased by 0.2%, but the year over year change was 2.8%. Initial claims for unemployment insurance were up 20k last week to 243k, but that is a historically low number. All these data points indicate a very tight labor market and gives the Fed the go ahead for a rate increase next week.

The big negative in the report was retail. Jobs were down 26k in the retail sector, the most since December of 2012. This reflects the shift to on-line retail as brick and mortar stores continue to get hit. This will have some negative impact on the high yield market down the road.

In many ways, this was the speech we have been waiting for. Trump leaned towards the optimistic side, gave a speech without insults and attacks, a speech that tried to bring the country together, instead of apart. Other than his short victory speech at 3 am the night of the election, it was the first time Trump actually acted sounded presidential, and because of that, his message was much more effective.

The market liked what it heard and the way it was said, and the Dow jumped 300 points the next day. For the week, US equities were up 0.63%. International stocks advanced 0.35%.

Interest rates, which had been falling recently, turned around and jumped about 20 basis points. That pushed the prices of the bond index down by 0.78%.

Unfortunately, by week’s end Trump was back to his old self. Declaring on Saturday morning, via Twitter, that Obama had tapped his phones, without presenting a shred of evidence. One has to wonder how long the markets can ignore the President’s bizarre behavior

For all the forward-looking optimism on the markets, the story is not so bright in real-time, at least according the the Atlanta Fed’s GDPNow model. Q1 growth fell to 1.8% from 2.40% on a lower forecast for personal consumption expenditures. The estimate from the NY Fed’s Nowcast was not as dreary, remaining steady at 3.10%. Lower than expected inventories for manufacturers and merchant wholesalers offset the negative news on personal consumption expenditures in their model.

But around the globe the economic outlook continues to look brighter. The global manufacturing PMI increase by 0.2 points to 52.9 in February. the index is now up six months in a row, that is the longest winning streak in three years and the index is at its highest level since May of 2011. 86% of individual countries are now in expansion territory.

The Fed has been more aggressive in sending the message that a rate hike will happen sooner, rather than later. A March rate hike is now likely.

Initial claims for unemployment dropped by 19k to 223k, the lowest amount since March of 1973. The four-week average now stands at 234,250 and that is the lowest number since April of 1973.