The US and international equity markets were down by about 0.10% on the week. Companies continued to report blockbuster earnings, even better than expected, but that was not enough to move stocks higher.  That was due to the fear of “peak earnings”, as in “it doesn’t get any better than this”. Those were the words that were tossed around all week. It is not that investors expect a recession in 6-months, but the rate of acceleration in earnings growth has probably peaked. The Caterpillar CFO, in a post-earnings conference call, said Q1 earnings would be the “high water mark for the year,” that helped send the Dow on a 400-point tailspin on Tuesday.

But it wasn’t just the fear of “peak earnings” that spooked the market. Give some credit to higher interest rates. The 10-year Treasury topped the 3% mark on Tuesday, Wednesday, and Thursday, only to close at 2.96%, the same rate as the previous Friday. A 10-year Treasury yielding greater than 3% presents competition for equities. On one hand, the market fears a flattening yield curve, represented by static long-term rates and rising short-term rates, and then when they get the opposite, with long-term rates increasing, they are still not happy.  A flattening yield curve stirs up thoughts of a recession down the line, while a steepening curve could indicate inflation.

The government reported the first estimate of GDP growth for Q1 at 2.3%. That was above estimates but lower than the 3% growth rate for the final 9-months of 2017. For the past few years, Q1 has been the slowest quarter of the year. So if recent trends hold true, GDP should expand from here. 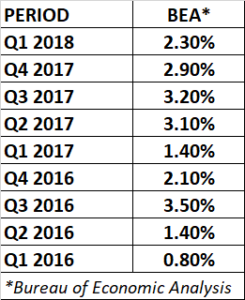 The Institute of Supply Management (ISM) reports the highest backlog of orders in manufacturing since May of 2004. Supply chains are having difficulty keeping up with the demand. The same problem is occurring overseas, a shortage of labor and equipment are limiting production.

Equity markets rallied on the week, US markets were up by 0.67% and international stocks increased by 0.14%. The rally was good enough to turn US equities positive for the year. But stocks are by no means out of the woods. Stocks advanced on Monday, Tuesday, and Wednesday, but fell on Thursday and Friday. And when looking at a weekly chart, if this coming is week is down, that would be two successive lower highs. Support in the 253-255 level is still crucial to prevent what could turn into a bigger decline.

Interest rates were in the news this week. The spread between the 10 and 2-year Treasuries fell to 41 basis points on Tuesday, the lowest differential since August of 2007. But the 10-year yield jumped higher on Thursday and Friday to close at 2.951%, to widen the spread all the way up to 50-basis points, basically even with the year-end value at 12/29/2017 of 51. The10-year’s closing yield of 2.951% is the highest for this year and the highest since January of 2014. As interest rates rise, all other things equal, investors will have the incentive to move from equities to fixed income, pushing down p/e ratios.

Earnings reports continue to be positive. Q1 earnings should now be up by 20% according to Thomson Reuters. About 80% of companies reporting so far have beaten estimates and 71% have topped sales estimates. The current forward p/e is 16.6, a somewhat reasonable level.

Exploding US deficits are starting to seep more and more into the news. The two graphs below show the magnitude of the problem. An IMF report shows the US is the only advanced economy expected to show an increase in the debt-to-GDP ratio over the next five years. 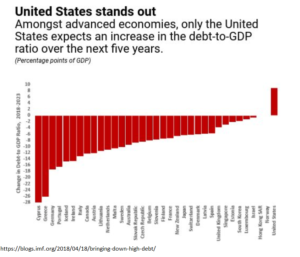 The chart below shows how the cost of paying off just the interest on federal debt is going to massively increase in coming years, hitting north of 20% in future years. That is up from the 2017 number of 8.1%. Only Italy currently pays more. 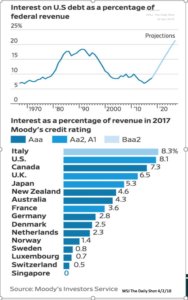 If the recent tax cuts do not generate the hoped-for growth in the economy, taxes will be increased at some point in the next few years.

It was another week filled with non-stop news. Two Saturdays ago, on April 7, the Syrians launched a vicious chemical attack on their own citizens. On Sunday, Trump said that there would be a “big price” to pay. On Monday, the FBI raided the office of Trump’s personal attorney, Michael Cohen, as part of a wide-ranging corruption investigation. Also, on Monday, the CBO released their latest budget projections. On Tuesday, Chinese leader Xi Jinping promised to relax barriers to trade. And then House Speaker Paul Ryan, announced that he will not run for reelection. Ryan was one of the only members of Congress to even talk about the threat of the budget deficit. Then on Thursday, Trump said he was open to rejoining the Trans-Pacific Partnership. Friday night, hours after the market closed, the US, along with Britain and France made good on Trump’s promise earlier in the week, launching missile attacks against Syrian facilities used for chemical weapons storage and research facilities.

It was Jinping’s comments about trade that moved the market the most. Stocks jumped by 1.62% on Tuesday on his remarks. For the week, US stocks were up 2.02% and international stocks were up 1.77%. Oil advanced by 8.59% and bonds were down slightly. The 2-10 yield curve dropped to 45 basis points.

From a technical perspective, the market held above support and above the 200-day moving average. However, on every day except Tuesday, stocks closed near their low for the day.

Earnings season got underway. According to Thomson Reuters, of the 30 S&P 500 companies that have reported earnings so far, 70% have beat expectations. That is above the 64% long-term average, but below the average for the last year of 75%. The forward p/e is now at 16.4.

The nonpartisan Congressional Budget Office announced that US budget deficits will cross the trillion-dollar mark in 2020, two years sooner than previous projections. And that is based on optimistic assumptions such as 3.3% growth this year, unemployment of 3.8% this year and 3.3% next year. In percentage terms, the deficit this year will be 4% of GDP, an increase over the 3.5% last year. By 2019, the deficit will be 4.6% and eventually peak at 5.4% in 2022. But in an “Alternate Fiscal Scenario”, the CBO sees a 6% deficit in 2022 and debt in excess of 100% of GDP by 2027. Both of these projections assume no recession, an unrealistic assumption if there ever was one.

The deficits are blowing up because of the recent Trump tax cuts as well as a wave of red ink that is about to arrive due to the structural problems with social security and Medicare. The US is going to be forced to reverse in some manner the recent tax cuts down the line. And politicians on both sides of the aisle have refused to deal with the structural deficit problems for decades now.

In a reversal of trade tensions, Chinese leader Xi Jinping announced on Tuesday that he would reduce tariffs on cars, improve protection of intellectual property and open up the financial industry. And then on Thursday, Trump said he would consider rejoining the Trans-Pacific Partnership (TPP). This was after Trump pulled out of the deal after becoming President, and after spending a good portion of his campaign railing against the TPP. Part of the President’s reasoning might be the threat posed by a rising China. American entry into the TPP, if the other countries would even take the US back in, would be a smart economic and strategic tie-in with one of the fastest-growing regions in the world.

Oil prices ended the week at a three-year high on strong demand and geopolitical tensions. As shown below, the oil glut has worked its way through the system and supplies are back to more normal levels. The threat of military action in Syria and tensions with Iran are also pushing prices higher. In its Friday report, the International Energy Agency (IEA) said that it expects demand for oil to grow by 1.5 million barrels a day in 2018. On top of that, oil production by OPEC nations has been trending lower 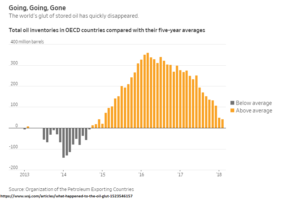 Equity markets were in a tug of war all week over trade news, moving up and down, finally finishing the week off by 1.36%. International stocks dropped by 0.87%. The market has now moved intraday by more than 1% in 9 of the last 11 sessions, that is more than all of 2017. Prices are back again to their 200-day moving average, a marker used by many technical analysts to determine if the market is in bull or bear mode. Equities are also close to breaching through support, a dangerous condition that led to falls in 1962 and 1987 when the economy was not in recession mode but did carry similar valuations.

The Trump administration seems to be doing everything possible to derail the economy and the markets as tensions flare between the US and China over trade. It is true that China does not operate by the same rules as the US in many regards. Chinese trade policy forces technology transfer, takes US intellectual property, forces American companies into partnerships with Chinese entities, and imposes steeper tariffs on American imports than the other way around. But at the same time, China has been moving in the right direction, albeit slowly. And the Trump playbook of publicly attacking Chinese trade policy may not work from a cultural perspective and might box the Chinese into a difficult spot. Unfortunately, this is how trade wars start. The hope is all these threats and tariffs will lead to real negotiations that can produce a fair agreement before more serious damage is done.

Make no mistake about it, there are no winners in an all-out trade war. As most Americans should remember from their middle school or high school education, a contributing factor and perhaps the main factor in the Great Depression was the Smoot-Hawley tariffs of 1930, which led to a full-scale trade war and a subsequent collapse in economies around the world.

For now, the conventional wisdom is that we are not close to a trade war. That common sense and good economic policy will prevail, and that this will all work out in the end. We hope so but are not so sure. A lot of this market rally has been based on optimistic earnings projections, and the threat of a trade war or its eventual implementation will start bringing down forecasts which would bring down equity prices. At that point, the economy could reach a tipping point that could accelerate the start of the next recession. That would also be political suicide for team Trump.

For now, earnings forecasts remain steady. But as the earnings season shortly begins, it will be interesting to see how companies comment on how future business might be impacted.

The market is hypersensitive to a trade war threat. Equities moved up and down all week as the trade news flipped from negative to not so negative and then back to negative (see below).

Non-farm payrolls increased by 103,000, much less than the 178,000 estimate. However, the longer-term trend is very positive, plus 202,000 per month over the last three months. Unemployment remained steady at 4.1%. Average hourly earnings were up by 0.3% for the month and are now up 2.7% year over year. The average workweek stayed the same at 34.5 hours.