The Dow broke the 30,000 barrier on Tuesday for the first time and is now up about 60% since the March low. In the last couple of weeks, positive vaccine news gave the market a possible end date on the pandemic, and Trump announced on Tuesday he would cooperate with Biden on the transition, those were enough reasons for investors to move stocks to the historic highs.

This is a market that can really do no wrong. It continues to move higher, counting on a booming recovery when the virus ends, while simply ignoring a virus that seems to be everywhere and its economic fallout.

The rally has been broadening as more stocks are joining in. The Russell 2000 index small-cap companies reached a new record and international stocks are close to topping their 2018 peak.

Bullish sentiment is everywhere, and in the past, that has sometimes been a precursor to either underperformance or a decline. The chart below shows bullish sentiment as measured by the AAII (American Association of Individual Investors) versus the S&P 500. Bullish sentiment hit very high levels two weeks back.

There is some good news in the economy, even in the face of rising virus numbers. The IHS Markit composite index of US business activity increased to 57.9 in November, up from 56.3 in October. The increase, which is a preliminary estimate, would be the fastest pace of growth since March of 2015 and represents a positive divergence from Europe, where their measure has been sinking. 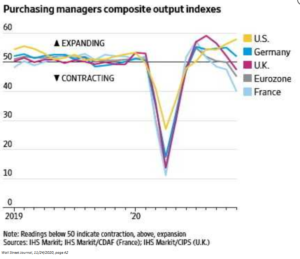 As for the virus itself, the pace of growth seems to have slowed, but there is the threat of another ramp up coming off the Thanksgiving holiday. 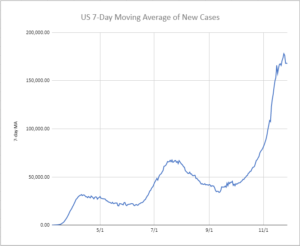 US stocks were down by 1.22% while international equities finished 0.91% higher. Good news from Moderna was offset when the Treasury Department announced it would not continue five special lending facilities, as well as a JP Morgan projection that it sees the economy contracting in Q1 of 2021. Fed Chair Jerome Powell said the next few months will be challenging and asked for more fiscal support, but that does not seem likely until the Biden administration takes power.

Following up on the Pfizer announcement from one week prior, Moderna announced on Monday that its Covid vaccine is 95% effective based on early trials. That is a huge win for science and puts a rough end date on the epidemic of 9-months to a year, but in the meantime, the virus is just exploding. Maybe, hopefully, the growth of the virus is beginning to slow in the USA, the 7-day moving average has stayed at about 165,000 for five days. Of course, it might just be a pause but the trend has been relentlessly higher since the beginning of October until now. 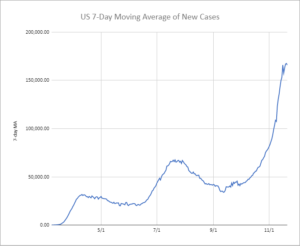 Home sales hit a 14-year high in October as sales increased for the fifth straight month. After years of disappointments, home sales have been the bright spot in the Covid economy, as ultra-low interest rates and a desire to get into individual homes have driven purchases.

October retail sales were disappointing, rising just 0.3% in October, lower than the 0.5% consensus estimate. Jobless claims increased by 32,000 last week. 742,000 were filed last week. More increases might be on the way as Boeing, Disney, and Exxon have recently announced job cuts.

Running out of legal options, Trump’s lawyers are making even more bizarre allegations, claiming the election was stolen via a massive conspiracy involving Democrats and foreign governments, including some help from Hugo Chavez who died in 2013! To date, there is no evidence of any kind of widespread fraud, and many of Trump’s lawyers have said they do not believe there was widespread fraud. Trump fired the official who was in charge of election integrity after he said there was no fraud. Jeffrey Engel, a presidential historian at Southern Methodist University said that other candidates have challenged election results in the past when there were clear and legitimate circumstances, but “all of them recognized that the unity of the country was more important.”

The market was anticipating a Biden romp, a blue wave, and a huge fiscal package that would offset higher tax rates. Investors figured that was a good formula and stocks ran up in anticipation. What they got might even be better. Biden will be the President, a Senate that might lean Republican, and the Republicans even managed to pick up seats in the House. What it all means is the US gets a civil, decent, and more predictable President, someone that will act as a unifier and a leader for all, and that will be restrained from doing anything too crazy given the mix of the Senate. The market liked the look of that and turned in its best week since April, up 7.35%, it was the best election week return since 1932, and that was coming off the worst pre-election week ever.

Of course, Trump refused to concede defeat, embarrassing himself in the process,  claiming the votes that put Biden over the top were illegitimate and filing lawsuits wherever possible. But no one is buying it, Biden will be the next President after the lawsuits run their course.

While the political news was good, the virus news wasn’t. The virus is taking on an exponential growth rate and that is bound to impact the economy until it gets under control. 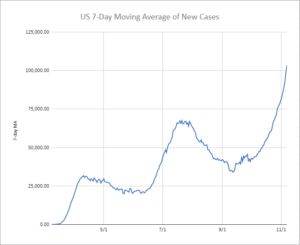 In the meantime, the economy continues to rebound. The Institute for Supply Management’s manufacturing index increased to its highest level, 59.3, since 2018. New orders reached its highest point in 17 years. The October payroll report was also strong, as the US added 638,000 new jobs and the unemployment rate fell to 6.9%.

Stocks are getting support from interest rates that basically don’t exist, at least above zero. Bloomberg reported that negative-yielding debt hit $17.05 trillion on Friday, surpassing the August 2019 mark. On top of that, the Fed is buying $120 billion per month in treasuries and agency mortgage-backed securities each month. The Fed’s balance sheet has ballooned to $7.1 trillion from $4.1 trillion at the end of February. And as we have shown in the past and below, there is a strong correlation between Fed assets and the stock market. 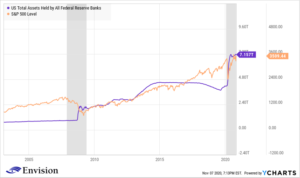 More than 25% of all investment-grade debt now yields less than zero. That has pushed investors into equities as well as riskier fixed-income investments like high-yield and leveraged loans. While the price of the riskier fixed-income products has risen, the fundamentals haven’t. The artificially low investment-grade yields are masking potential problems in these debt markets. A problem maybe not for now but probably for later.

US stocks fell by the most since March, dropping 5.6%. It was the worst loss ever in the week preceding a Presidential election. While stocks fell, the ten-year yield reached its highest level since June, the exact opposite of how treasuries normally act in a falling equity market. High tech valuations, a fast-expanding virus in Europe and the US, and then throw-in election worries and you have what it takes to tilt the market way off balance.

US equities hit their high on 9/2 and then sold off by 9% through 9/24. A subsequent rally ended on 10/12 when stocks could not break through the September high. The market is now down 7.5% from the high.

The economic news for the week was good. GDP was up by a record amount in the third quarter. Jobless claims fell to a 7-month low, coming in at 751,000. Personal income rose in September by 0.9% and personal spending was up by 1.4%. Corporate earnings are down 12.5% from last year but 9% higher than was forecast, according to Lindsey Bell, the chief investment strategist at Ally Invest.

Real GDP shot up by a record 33.1% in Q3, which followed a 31.4% drop in Q2. Net, net, the US is down about 3.5% from the pre-crisis peak. To close the remaining gap, the service economy is going to need to get back to normal, and that will be almost impossible if the virus keeps impacting economic activity.

With the election just a few days away Biden leads by more than 8 percentage points based on recent surveys, but Trump is counting on inaccurate polling to pull the surprise victory. The pollsters, who completely miscalled the 2016 election, say don’t count on it, with the likely outcome being between a somewhat close contest with a Biden edge that can be disputed and spillover to the courts, to a Biden blowout win. The bigger question is can the Democrats take the Senate. Assuming a Republican victory in Alabama, the Dems will need to win four seats currently held by Republicans to gain control. With Colorado, Maine, and Arizona leaning to the Democrats, “North Carolina or Iowa could be the tipping-point states,” according to Jessica Taylor, editor of the Cook Political Report.

Germany and France implemented a new set of lockdowns to try to get the virus under control. France will lockdown for at least one month. People will have to remain at home, nonessential businesses will close. The German lockdown is less restrictive but will close restaurants, bars, gyms, and theaters. Here in the US, the surge of the virus is now at record levels. 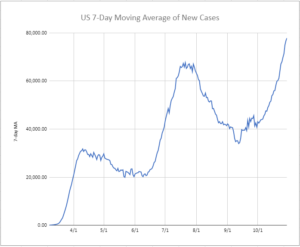