The SPY dropped 1.62% and the DOW dropped 264 points. The market closed at its lows for the day. So is this the beginning of a long awaited correction? Maybe. But lots of people including me have thought that many times in the past.

But in the short-term this might be a buying or trading opportunity. I am not predicting that but will bring up something we have written about in the past, and that is the pop in the VIX.

Not surprisingly, when the market falls hard like it did today, the VIX will have a big move to the upside. Today it burst up by over 20% to close at 16.00. That puts the VIX two standard deviations above its mean when measured over a 20-day period. In the past, that has been a buy signal.

Here is how it has worked out over the last year:

The average 5-day return has been 1.04% and 1.52%. More impressive is that several of these signals have been good entry points over the longer run. If the market fails to have some kind of positive reversal that might be a signal that a correction is beginning, or it might not! That is the market (and why it is usually better to focus on the long run).

Leon Cooperman and Howard Marks, two of the sharpest investors, on Bloomberg.

In regards to valuations Marks says that most assets are on the high side of fair value. Interest rates are being held at unnaturally low levels which implies that prices are unnaturally high. When the bond market ceases to be manipulated, rates will rise and that means that bonds will decline in price.

Cooperman talked about the equity markets. He said that over the last 50 years the SP500 has had an average p/e ratio of about 15, and when inflation was low (between 1 and 3%) the p/e averaged closer to 17. During the time when the p/e averaged 15 the 10-year government bond averaged about 6.67% and US Treasury Notes averaged 4.4%. Today, the p/e is at about 16. However, we have close to 0% short rates and 10-year government bonds are at about 2.5%.

UP AND DOWN WALL STREET

Lower interest rates in Europe have not really helped as the unemployment is high and the economy is still dragging, with GDP close to flat. So Draghi has announced an asset purchase plan and the ECB cut interest rates into effectively negative territory for banks. The benefactor of this might be the rest of the world including the US.  A good portion of this new liquidity will end up in the US, pushing the dollar up and lowering inflation and lowering US interest rates. This will ease the impact of a less accommodative Fed. To use a football analogy, Yellen has handed the ball off to Draghi to keep the party is going.

Ten top market strategists expect the bull market rally to continue. The SP500 is at 2007.71 which is higher than the average target of 1977 when the panelists met in December. They are looking for 2030 by year-end.

The ECB cut interest rates to .05% from .15% and announced additional stimulus. The SP500 was up 4.34 points to 2007.71 for the week to close at a record. Economic growth should continue in the US. Adam Parker of Morgan Stanley thinks the SP500 could hit 3000 in five years if the expansion continues. IPOs are up to their highest point since 2000, an increase of 50% over last year.

The column is bullish on Mexico. 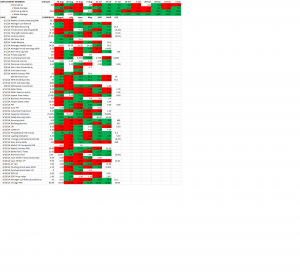