It started out as a good week on Monday, as the market rallied on news that the possible trade war with China would be put on hold. But as the week wore on, stocks drifted slowly lower but did manage a small gain for the week. The US market was up by 0.30% but outside the US, equities fell again, down 0.95%. Trump canceling his summit with North Korea, the rise of anti-establishment parties in Italy and a kickback scheme involving the ruling party in Spain held stocks back. Not to mention, the Trump administration, out of nowhere, said it was now considering tariffs on imported automobiles in the name of national security!

Interest rates in the US declined, partly on the safe-haven trade, falling oil prices, Trump’s auto-tariff proposals, and Fed minutes showing that interest-rate increases would remain gradual. The yield on the 10-year Treasury dropped by 13 basis points to 2.93%. It was the biggest one week decline since April of 2017. The spread between the 10-year and the 2-year Treasury is now 45 basis points (the April low was 41 basis points). 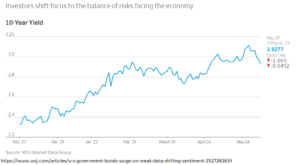 Oil prices fell sharply, down 4.77% on the week, and most of that on Friday, as Russia and Saudi Arabia reached a deal to increase oil production.

Stocks in the US fell by 0.26% and by 1.01% outside the US. Higher interest rates worried the markets as the 10-year yields hit a 7-year high, causing the bond market to drop by 0.53%. Increased yields reduce the present value of a future stream of cash flows, resulting in a theoretically lower stock market value, all other things considered. But the offset to that are the “other things”, such as a decent economy, improving earnings, buybacks, etc. Small caps, for one, don’t seem concerned, the Russell 2000 Index hit new highs this past week.

But trade continues to be a worry. Slight progress was reported on talks with China, but that has yet to be resolved. At the same time, NAFTA negotiations missed an important deadline and appear to be stalled.

The Conference Board’s Leading Economic Index was up by 0.4% in April, March was also revised up to 0.4% from 0.3%. Eight of ten components made positive contributions. “April’s increase and continued uptrend in the U.S. LEI suggest solid growth should continue in the second half of 2018. However, the LEI’s six-month growth rate has recently moderated, suggesting growth is unlikely to accelerate,” said Ataman Ozyildirim, Director of Business Cycles and Growth Research at The Conference Board. 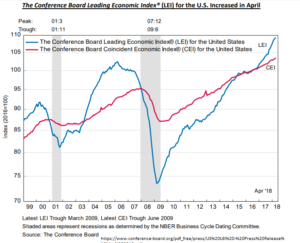 The yield on the 10-year Treasury note hit its highest level in seven years on Tuesday in response to positive economic news. Consumer spending was up in April for the second straight month and a NY Fed manufacturing survey had better than expected results. The higher yields are carrying over to mortgage rates. The average rate for a 30-year fixed rate mortgage rose to 4.61% from 3.99% in January and 3.31% at its low in 2012. Higher mortgage rates might encourage homeowners to stay in their current homes instead of trading up. Higher rates will also make some homes less affordable for prospective buyers.

Helped by tax cuts, deregulation, and repatriation, investment in capital (capex) such as factories and equipment were up 24% to $166 billion in the first quarter, after an extended period of subpar investments. Although capex is considered good for long-term economic growth, studies suggest that shares of companies with large capital investments underperform the market. However, there are always exceptions, Amazon being perhaps the best example. 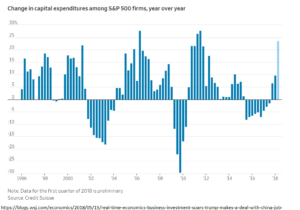 Trade negotiators missed a deadline to wrap up a North American Free Trade Agreement deal this week. Despite President Trump’s claims, NAFTA has been a big boost to economic growth in North America and failing to renew the agreement would be an economic negative.

It was almost like the good old days (of 2017), the market shrugged off negative news and marched steadily higher. US equities were up 2.5% and international stocks were up 1.4%. US stocks are now up 2.8% for the year. Bonds were flat.

The chart below, from John Murphy at Stockcharts.com, shows that economically sensitive transports have recently been outperforming utilities, a positive technical sign. 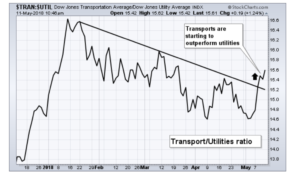 Financials have also broken out of a recent consolidation range to the upside. Markets were helped by a mild CPI report. The index was up by 0.2% in April and the core CPI increased by only 0.1%. Total CPI is now up 2.5% year over year and the core is at 2.1%.

The Labor Department reported that there were a record 6.6 million job openings in March. That is enough so that theoretically, every unemployed person could have a job, the first time that has ever happened. Of course, skill and location mismatches make that impossible. But it is an indication of a continued strong job market.

OIL PRICES ON THE RISE 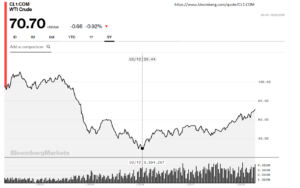 Capital Economics estimates that export growth in China fell 2% in April, the largest drop in nine months. Copper prices are down 6% year to date, copper is a bell weather for growth in Asia. And purchasing managers’ indexes for manufacturing, while still in expansionary mode, have declined from peak levels in the US, Europe, China, Japan and South Korea.

A strong Friday rally, +1.29%, saved the equity markets, turning what would have been a bad week into a small decline, just 0.27% in the US and 0.54% outside the US. At the Thursday low, the market was down 2.67% for the week and below the 200-day moving average. Stocks have now bounced off the 200-day three times. And at least so far, each successive test formed a higher low. By no means are we ready to call an “all-clear”, but so far, so good.

Unemployment fell to 3.9%, the lowest level since December 2000. Employers added 164,000 jobs. It was the 91st consecutive month of job growth, the longest streak on record. Average hourly pay was up by 2.6% year over year.

The White House will delay a decision on tariffs targeted at the European Union, Canada, and Mexico for one month. A US delegating went to China to see if the countries can come to an agreement.

In one of the more bizarre conference calls of all time, Elon Musk cut off legitimate analyst questions in a condescending manner, leading to speculation that the company is beginning to feel the heat from its cash drain. Pressure is mounting on the automaker as Moody’s estimates Tesla will need to raise another $2 billion to cover the 2018 cash burn and to refund convertibles that mature over the next two years. Tesla bonds are now trading as “junk” level.

The PCE Price Index rose 2%, year over year, hitting the Fed’s inflation target. This suggests that the Fed will remain on the path of increasing interest rates.