Joseph Paul of Alliance Bernstein argues that the fear of market overvaluation due to the current CAPE ratio is overstated. Click for more.

Up & Down Wall Street

There has been a big rush to buy long-term government bonds, both here in the US and overseas. Long-term rates priced in higher short terms rates than are likely resulting in a yield curve that is too steep. Thus, yields are now moving lower, the opposite of what all the experts thought would happen. Randall Forsyth writes “investors are flocking to safety in the form of low-yielding bonds and so-called defensive stocks sporting high price-earnings multiples. That the true conundrum.”

HollyFrontier (HFC) – first quarter profit was cut in half from prior year, shares down 5% last week. HFC refines oil in Permian Basin. 2.4% yield with plenty of cash on balance sheet. 11.3x 2014 earnings. Stock can get to $62 (+26%) according to Edward Westlake of Credit Suisse.

A Cheap Play on Alibaba’s Growth

China Mobile (CHL) trades at 11x estimated earnings. Stock has been flat since 2008. Yield is greater than 4% but might drop slightly this year. EV/CF =3.4 based on estimated EBITDA. Government owns 74%. Has been using a 3G network but now rolling out 4G. Has 62% market share in China.

Alibaba needs high speed 4G for growth. Priced at $48 Bernstein analyst Chris Lane has a $67 price target. Matt Ring at Penza says there is “incredible downside protection from both the low valuation and the significant net cash position.”

Risk is that the cash can end up being used for political projects. Minimal FCF this year due to capex.

What the smartest investors are buying now?

Two Stocks in the Recovery Zone

Brinks was hit with a $122m write down due to currency devaluation in Venezuela. At $25 trades for an EV of 3.8x EBITDA. Competitor Loomis trades for 7x. Jeff Kessler at Imperial Capital thinks margins can get back to 5 to 6% with earnings rising to $1.90 next year. He has a $27 price target.

Big 5 Sporting Goods (BGFV) is down 44% since last May to $12.07. Hurt by falling gun and ammunition sales. Looking to improve margins and comparisons should start getting easier. Mark Smith of Feltl has a $19 price target.

Farha Aslam of Stephens likes Tyson. “Tyson is managed for consistent growth. They have committed to delivering 10% earnings per-share growth annually and to maintaining a very strong balance sheet.”

“They have an active program in place to buy back 34.6 million shares.”

Whitney Tilson updates his analysis on Berkshire. Click for link.

Gundlach was interviewed by Tom Keene. Here are some of his points:

1. “The funding of retirement benefits and health care benefits will start to worsen the deficit again, starting around 2017, and we don’t really know how we are going to deal with that.”

2. Bond yields are being held down by baby boomers that are retiring and need conservative investments.

3. In 6 to 10 years government financing needs will increase and this will put pressure on interest rates.

The economy continues to advance, albeit slowly. The GDP came in for the first quarter basically flat, with a 0.1% advance. This was a big miss. GDP increased a strong 3.4% in the back half of 2013 so a drop to 0.1% is significant, but the weather was terrible in Q1 and did have a real impact although it is hard to blame all of the decline on the weather.  But the economic reports coming in over the last few weeks have been generally positive and point to continued slow growth probably in the 2%+ range over the remainder of the year.

Employment reports have been good and the trend in initial claims has been declining of late. Continuing unemployment claims are down 5% from the end of March and down 10% from the end of February (this is based on the April 25 numbers). Jobs are still not being created in big numbers but they are being created. There is no news of huge layoffs in the system.

Regional activity for the most part is also up. The Chicago PMI was way up but the Milwaukee PMI was down. Reports from the Dallas Fed, Philadelphia Fed, Richmond Fed all were positive by nice amounts. The KC Fed report was down from the prior month. So in general the reports were leaning positive.

The home sale numbers released in April were the big disappointment. New home sales came in much lower than consensus (384k v 450k) and lower than last month (440k). But home prices continue to increase. The S&P/Case-Shiller 20-City Home Price Index increased year over year by 12.9% but this represents a smaller increase for the third consecutive month. Auto sales, released at the beginning of the month were good. Light vehicle sales were running at a 16.3m annual pace above the estimate of 15.84m.

While the economy is not booming it is not reversing either and there appears to be minimal stress in the system. The St. Louis Fed Financial Stress Index which is designed to measure stress in the financial system posted its largest weekly decline in 10 weeks today (report as of April 25 but released May 1) and is now at its lowest level since March 15, 2013. 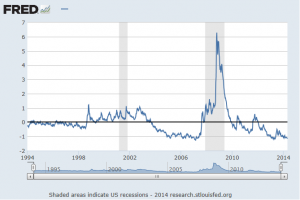 Below are the April numbers: 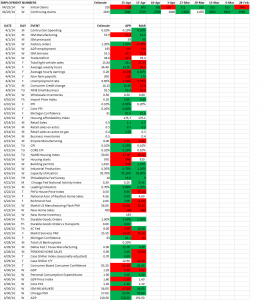