A big reason for the US selloff was the dramatic ramp-up in Covid cases as a record number of infections have been recorded. Infections across the US are up by 65% over the past two weeks. 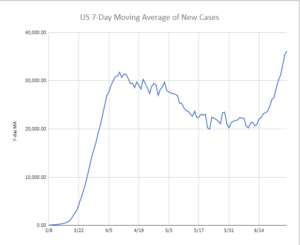 The stress test results on banks, released by the Fed on Thursday, did not help. Buybacks were suspended and dividends were capped for the third quarter. The Fed also said that future dividends would be dependent upon earnings, couple that with an expanding virus, and financial stocks lost investors’ interest as the week closed. Investors also have to start or have started to price in the chance of a Democratic sweep in November.

Raw material prices have been increasing, a sign that the supply/demand curve is shifting in favor of producers. Raw material prices tend to move in real-time based on supply and demand and increasing prices indicate that the recovery might be ahead of what was anticipated. The raw material prices reflect increased economic activity around the globe, but the surge in the virus might slow down those gains.

The increase in raw material prices might be reflective of the improved purchasing managers index scores as reported by IHS Markit. The US composite measure came in at 46.8, the highest score in four months. A score of less than 50 is contractionary, but the trend is positive. In the eurozone, the composite score was 47.5 in June compared to 31.9 in May.

Gold prices are nearing all-time highs. There are several factors at work. Given ultra low-interest rates, it is more attractive to now hold gold given it does not pay interest. In addition, new fears about the rising virus count might indicate more government spending, which could devalue global currencies.

Stocks rallied by about 2% in the US and 0.88% outside the US. An improving US economy, from a historically low base, is helping markets. Added stimulus from central banks in the last few weeks is also providing lots of help. And then there is the fear of missing out, with a rally that does not seem to want to stop, investors who missed out are tempted to pile in.

Retail sales were up by 17.7% in May, a record increase. That follows the largest monthly drop ever, 14.7%, in April. However, spending is still lower than the pre-pandemic levels.

The Fed said on Monday that it has $250 billion ready to buy corporate bonds. The central bank said it would begin making those purchases this past Tuesday. The bonds would consist of a broad index that meets certain criteria.

Jobless claims seem to be leveling off. 1.5 million applied for benefits last week, down by 58,000. And the number of Americans receiving benefits fell by 62,000 to 20.5 million in the week ending June 6.

Not all the news is good, markets were spooked on Friday when Apple said they would temporarily close 11 stores in states where the virus is spiking. Case counts are starting to rise quickly in Florida, Texas, Arizona, and California. But these states seem intent on not closing. Meanwhile, in China, a flare-up in Covid cases led to a lock-down in Beijing. Chinese officials canceled flights in and out of the city, closed business, schools, and limited movement in an attempt to stop the next wave of cases. 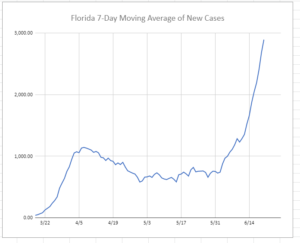 Many Americans have stopped paying off loans. More than 100 million student loans, auto loans, and other debts have not been paid since the virus started, according to credit reporting firm TransUnion. About 80% of that number is for student loans.

Stocks fell hard, dropping 4.90% in the US and 3.62% outside the US. On Thursday, stocks fell by 5.90% and the Dow dropped by 7%, on a surge in virus cases and comments by the Fed indicating a long recovery in the job market.

Meanwhile, Hertz (HTZ) advanced by 100% for the week, breaking $6 at one point, even though the company had previously filed for bankruptcy. It would be normal for a bankrupt company to sell at or very close to $0, but this indicative of the new wave of day traders that speculate on anything that might move in price regardless of the fundamentals.

The Fed announced that they would keep interest rates at very low levels for years and were studying ways to help the economy.

The National Bureau of Economic Research made it official, stating that the US entered a recession in February, ending a 128-month expansion. While the announcement was no surprise, when it might end is still up in the air. So far Congress has spent $3.3 trillion to support the economy. The Congressional Budget Office said it would take a good part of the decade to recover and they are looking for a $3.7 trillion dollar deficit this year. The World Bank said that they expect the global economy to shrink by 5.2% this year.

American’s rioted in the streets in a manner not seen in decades over the death of George Floyd at the hands of police in Minneapolis, but that didn’t stop equity markets, which continued an incredible run, up 5.3% in the US and 7.2% outside the US. The disconnect is startling. Jeremy Grantham of GMO wrote in his latest quarterly letter that the market valuation, as measured in terms of p/e, is in the top 10% in history, while the economy, is in the bottom 10%, and probably worse than that. However, on the other hand, Wharton Professor Jeremy Siegel, has said that if you do a discounted cash flow analysis and assume a 30% drop in earnings this year, followed by a return to normalcy, you would get a price cut of only 4% or so. That is slightly better than the overall US market as measured by the VTI which is down just 5.5% from the February 19 high.

As crazy as it seems that the market would rally with cities burning, it is not without precedent. The week after Martin Luther King’s death in 1968, stocks were up by 2.9% and were up 5.1% one-month after. Stocks were up 1.2% after LA police officers were found not guilty of assault against Rodney King. Liz Ann Sonders, chief investment strategist at Charles Schwab says that “…if you look back at large-scale civil unrest… the market tended to sort of look through that.”

The week was already positive but ramped higher on a surprisingly strong jobs report. The consensus was for a loss of 7.5 million jobs, but employers added 2.5 million jobs. The jobless rate fell to 13.3%, still a terrible number but down from 14.7%. The jobless rate is still 4x higher than in February, and some of the hires might be due to the PPP program. But the market took the report as a signal that the economy can come back to life sooner than feared and that a V-shaped recovery can happen.