It was a tale of two halves (to use a sports cliche), at the low midday Tuesday US stocks were down by 2.71% from the prior week close, but then rallied into the close and then again on Wednesday. Prices were steady on Thursday and then finished up by .89% on Friday on the blockbuster jobs report to scratch out a 0.17% gain for the week. International stocks fared better, +0.96% for the week, and bonds were off slightly, down by 0.08%.

There were 266,000 jobs added in November, the biggest increase since January, and 100,000 more than what economists had forecast. The unemployment rate dropped to 3.5%, the lowest level since 1969. Initial unemployment claims also are historically low at 203,000 for last week. And to top it all off, wages increased by 3.1%. Jobs were added in health care, transportation, and leisure and hospitality.

The strong payroll numbers affirm the Fed’s recent decision to hold rates steady, instead of cutting further. If anything, a strong report like this would normally give the Fed a lean towards raising rates. But Fed Chair Powell has indicated that the Fed would need to see inflation at or above the 2% target for an extended period of time before the next increase.

The recent rise of copper versus the fall of gold has been reflective of market sentiment. As fears of a recession began to fade, and the forecast for a stronger economy began to pick up, copper, an industrial metal has rallied. Meanwhile, gold, which is considered a market hedge, has been falling. 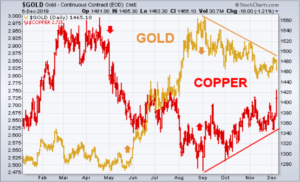 Despite the upbeat news outlined above, manufacturing is still at a weak point. The Institute of Supply Management’s (ISM) Purchasing Manager’s Index was measured at 48.1% in November, down from 48.3% in October, and a decent amount less than the 50% breakeven level that represents the difference between expansion (greater than 50%) and a contraction (less than 50%).

Timothy Fior, Chair of the ISM, said “Comments from the panel were consistent with the previous month, with sentiment improving compared to October. November was the fourth consecutive month of PMI® contraction, at a faster rate compared to the prior month. Demand contracted, with the New Orders Index contracting faster, the Customers’ Inventories Index remaining at ‘too low’ levels and the Backlog of Orders Index contracting for the seventh straight month (and at a faster rate). The New Export Orders Index returned to contraction territory…consumption (measured by the Production and Employment indexes) contracted…Inputs — expressed as supplier deliveries, inventories, and imports — were again lower in November, due primarily to a contraction in inventories that was partially offset by supplier deliveries returning to ‘slowing.’… Overall, inputs indicate (1) supply chains are meeting demand and (2) companies are less confident that materials received will be consumed in a reasonable time period. Prices decreased for the sixth consecutive month, at a slower rate.”