The market had its best week in three months as US markets increased by 4.07% and international stocks advanced by 3.17%. Investors were cheered by Biden opening up a bigger lead on Trump, hoping that minimizes the chances of a contested election. The consensus is also moving in the direction that a Democratic win will be good for stocks, as it would probably mean big fiscal spending.

The Republicans and Democrats appear to be getting closer to a coronavirus relief package, after Trump shutdown negotiations earlier in the week, only to change his mind a day or so later. Treasury Secretary Mnuchin upped the ante to $1.8 trillion on Friday, while the Democrats have proposed a $2.2 trillion dollar package. There are some Republican Senators who are opposed to a large spending package, so there will still be obstacles to overcome.

The Institute for Supply Management reported that its nonmanufacturing index, a survey which measures services activity, increased to 57.9 in September from 56.9 in August. In Europe, the purchasing-managers index fell due to a rising coronavirus. In Spain, the index fell to 42.4 from 47.7.

The virus is definitely on the rebound in Europe and the US. Eight US states are up 10% week over week. New cases in France are up to 18,000/day. The UK is up 20% from the prior week. The numbers in Spain are also way up. The good news is that we are getting closer to the initial launch of vaccines, probably in December. And there could be emergency approval of a couple of antibody drugs by Lilly and Regeneron that could help bridge the time gap between now and future vaccines. Of course, the rollout of these products will take a while, but we are getting pretty close to the initial launches. 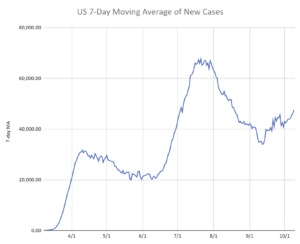