Stocks declined for the fourth consecutive week as the US market was off by 0.86% and international markets fell by 3.09%. Worries about rising coronavirus numbers and the subsequent economic impact, high valuations, as well as a volatile presidential race, have impacted prices. However, some of the tech stocks that were leading the decline rebounded this week, Amazon was up by 4.8% and Apple finished 5.1% higher. Fed Chair Powell has called on Congress to provide additional fiscal assistance to the economy. Estimated growth for Q4 will come down markedly if Washington cannot agree on a deal.

International stocks had a big fall, down by 3.09%, as Covid numbers continue to spike substantially higher in Europe and pressure increased to take aggressive steps to slow the spread. Numbers are also increasing in parts of the US. The Midwest appears to be getting the surge in cases that had previously hit other parts of the country. But even New York, which has been well under control since July, reported more than 1,000 new cases on Friday. Numbers in Florida have stayed flat recently at substantially lower levels from the peak, but will be getting a test soon as Florida Governor Ron Desantis has lifted all restrictions in the state. 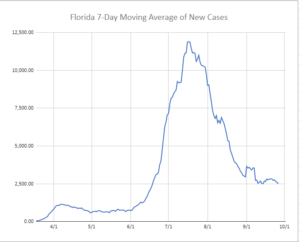 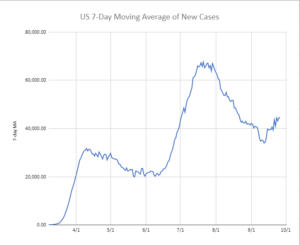 Initial public offerings are setting up for the biggest year since 2000, having already raised $95 billion so far this year, almost matching the 2014 number and there are still three months to go.

The economy is improving, although not at the rate that many had hoped. However, there are some pockets of strength. Durable goods orders were up for the fourth consecutive month, increasing by 0.4%. New orders for nondefense capital goods excluding aircraft were up by 1.8%. Andrew Hunter, an economist at Capital Economics, said “business equipment investment staged a V-shaped recovery in the third quarter.”

Trump said he would not commit to a peaceful transfer of power. “Well, we’re going to have to see what happens,” Trump said. Basically threatening to usurp one of the most hallowed traditions of the United States. Another reason why he is unfit to be President. The betting odds still favor Biden. 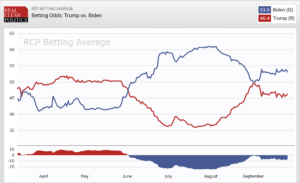