For the week, US stocks fell by 2.5% while the Nasdaq composite was off by 4.1%. The VTI (the total US stock market) has sustained some technical damage, and is barely above its 50-day moving average, after recovering from earlier in the day on Friday when it fell below. A break below the 50-day straight from here, or a failed rally to new highs followed by a break below the 50-day, could signal a bigger drop ahead.

Tech stocks have been up and down all week in volatile trading. The Nasdaq 100 had a 3% span from high to low on Friday and is down 11% since September 2. That decline was after a 58% run from late March. Apple is down 16% from its high but is still up almost 100% since its March 23 low. Tesla dropped by 21% after it was not selected to join the S&P 500. The overall US market is down 6.8% from September 2 closing price.

The easy gains in economic output coming off Q2 are beginning to slow down. The Federal Reserve Bank of Atlanta estimates the US will expand by 7% in Q3, up from a 9.1% contraction in Q2. But they are only looking for a Q4 expansion of 1.25%. Unemployment claims came in at 884,000 last week. The pace of the decline is beginning to flatten out at a level that still exceeds the prepandemic record or 695,000. The number of job postings is at levels 20% below last year according to Indeed.com. Washington’s inability to agree on a new stimulus package and restrictions that still remain on many businesses such as restaurants and bars in parts of the country are also holding back the economy. 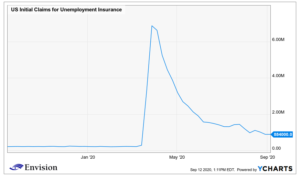