US stocks rallied by 12.95% and international stocks were up by 8.58%. For the US, it was the second time in the last three weeks that the market rallied by more than 10%. Looking back over the last seven weeks, stocks have either fallen or increased by more than 10% four times. And that does not include the week ending March 13th, when stocks just missed the 10% mark, falling by 9.74%, so if you round up that would be five of the last seven weeks. 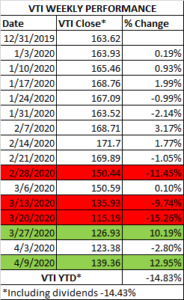 Remarkably, for the year, stocks are now down only 14.83%, right between the 14 and 18% that they have fallen during previous pandemics. Of course, the previous pandemics, outside the Spanish Flu in 1918, have not been as severe as this one, and we would expect more volatility and more downside.

However, based on history, that kind of wild volatility is not exactly an all-clear signal. In 2008, there was a rally of 12.03% and then of 6.76% a few weeks later, in the midst of a continuing bear market.

And in the Great Depression, there were massive declines and rallies over a 2-1/2 year period between September of 1929 and March of 1932. In the chart below of the Dow Jones Industrial Average, by our count, there were 13 declines and rallies of greater than 15% until the market hit bottom, and most of the percent changes were much greater than that.

We don’t think we are going into a long-term depression like the 1930s, but at this point, we don’t think this is going to be a V recovery and we would expect more downside. Hopefully, we are wrong and stocks can stabilize and/or go up, but we would not count on it. Of course, no one knows. Equity investors should be thinking with a longer time horizon of at least 3-5 years. If your timeline is long-term, market declines are opportunities to take advantage of in small increments based on your overall risk tolerance and the appropriate capacity.

Jobless claims came in this week at 6.6 million, down from a revised number of 6.9 million the previous week. Total claims over the last three weeks are now 16.78 million. These are numbers never seen before. Auto sales for March were down by 35%, and April will be much worse. The Michigan confidence index dropped by 9.5%.  It is estimated that 10% of the US workforce is now out of work. That is what happens when you intentionally shut down the economy. Again the numbers will get worse from here at least over the near term.

On the other hand, the Fed continues to rollout program after program to support the economy. No one will ever say the Fed did not do everything possible to help. The government is supporting the economy with massive fiscal stimulus and more is on the way. The long term impact of all of these measures is up for debate, but this is one of the big distinguishing characteristics compared to the 1930s. The other one is that this slowdown was mandated by the government and that there should be an end date, when therapeutics and a vaccine end the epidemic. The question is how much damage has been done by then and how quickly can the economy recover.

The USA might be plateauing in the number of new cases. It would appear the new case count is taking on the shape of a flatter bell curve as opposed to a steeper curve, which was the objective. USA cases did hit a new high on Saturday, which obviously is not good. 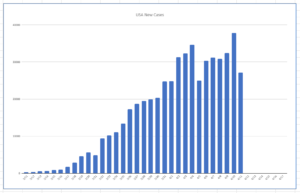 But despite that, if you look at a 7-day moving average, the US might have hit a peak. We emphasize the word might. 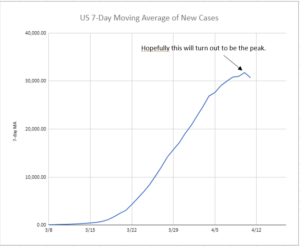 The US needs to get the economy moving again, even if it is in slow-motion at first, as soon as it is safely possible.