It was the strongest February since 1998 as the SP500 advanced 5.5%, after a weak January (-3.1%). This is the second year in a row that a February advance more than offset a January decline and these are the only two times it has happened since 1950.

The market was helped by oil prices stabilizing, and concerns lessened that Greece would default. The anticipated increase in interest rates appears to be delayed now until September at the earliest. 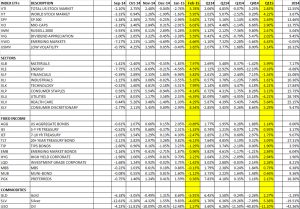