On February 16 we wrote about using the VIX as a short-term timing signal to get a hint of where the market might be headed. A positive signal that the market might go up would be generated when the VIX closes 2 standard deviations above its 20-day moving average. That happened on April 11. As luck would have it, that marked the low from last week. The SPY closed at $181.51 and has since advanced 2.7%.

A negative signal would be generated when the VIX closes 10% below its 10-day moving average. That happened yesterday when the SPY closed at $186.39.

Of course, this system does not work every time and I am not suggesting to use this as a trading system. It is just a way to see when short-term sentiment might have gotten too extreme. A negative signal on February 7 did not result in any kind of market pullback. The market kept going up. Same in regards to the October 16 signal. 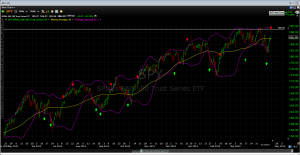